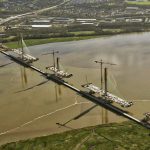 The Mersey Gateway Bridge project has released this stunning drone footage showing the progress of the construction.

Filmed in march 2017, the drones footage shows both the scale of the bridge and how hundreds of people are working across the site to ensure it will opens as planned later this year.

The drone filmed the bridge flying from North to South, and starts at the viaduct as it crosses the saltmarsh and Widnes, moving across the River Mersey, and then the Manchester Ship Canal to the construction site of the new Runcorn Astmoor Viaduct.

The logistics of the operation as well as the bridge-building machines, and huge cranes can be seen along with the gaps in the bridge deck that are slowly being finished.

“I’m hugely proud of the work that our team has delivered on this project and this film really shows the scale of the work we are undertaking right in the middle of the river. It’s great to see it brought to life in this way,” said Hugh O’Connor, General Manager for Merseylink.

“The scale of this project is phenomenal and this new drone footage also shows what a stunning new landmark we are creating for the whole of north west England,” said Leader of Halton Borough Council, Councillor Rob Polhill.

The Mersey Gateway Project team issued a warning 18 months ago on the dangers of drones being flown over a construction site and there have been no significant incidents, but they would remind drone operators that there are regulations governing drones and flying in public or around a construction site could lead to prosecution.

0 0 0
Previous : Virtual Reality is revolutionising Construction Operator Training
Next : European Investment Bank co-finances construction of a section of the A7 motorway in Germany