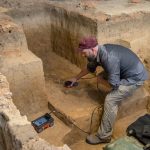 GSSI collaborates with archaeologists and the Jamestown Rediscovery Foundation

GSSI collaborates with archaeologists and the Jamestown Rediscovery Foundation

Jamestown –known for being the first permanent English settlement in the New World – will be commemorating the 400th-anniversary of the first representative government and arrival of the first Africans in 2019. To honor these two events, the Jamestown Rediscovery Foundation is excavating two sites where these events took place in 1619.

Last spring, Dan and Peter joined Senior archaeologist Dave Givens to help define the landscape of the first Africans. The Angela site, named after one of the first Angolans to arrive in 1619, is located in the “town” portion of Jamestown, a 40-acre landscape that remains largely unexplored. Located on National Park Service (NPS) property, the site consists of seven acres of garden, domestic quarters and storehouses all belonging to Angela’s owner, wealthy Jamestonian Captain William Pierce. “Our goal is to define the lost, 17th-century landscape in which Angela lived,” said Givens. Archaeologists from GSSI, NPS and Jamestown Rediscovery conducted a GPR survey in part of the town, which was a huge success. “We found more than could be expected of the town,” said Givens “it was a needle in a stack of needles.” The results of the survey not only clearly defined numerous buildings, boundary ditches, and post holes, but it also added critical information on how the town was laid out.

Building on the success of the work on the first Africans, Dan and Peter returned to Jamestown this summer to help solve a new problem: the site of the first General Assembly in the New World. This site is located inside the Memorial Church, a brick structure built over the original foundation in 1906. Under the floor of the modern church were at least three iterations of churches, all built on top of an original timber-framed structure constructed in 1617. It was in this church that the democratic experiment of representative government first met in 1619. The goal of the archaeologists is to define the 1617 church and the location where the assembly met prior to the space being converted into a museum in the spring of 2019.

It was at the Church dig site that the GSSI and Jamestown Rediscovery team collaborated to answer some critical questions. “The inside of the Church has centuries of material and remains buried inside; essentially making it a time capsule,” Givens said, “We needed to know which (tile) floors were constructed first without digging away the delicate fabric of the structure.” Although the archaeologists are learning as much as they can through excavations, the goal is to preserve as much as possible for the future. “Non-invasive techniques, like GPR, are critical to allowing us to understand this cradle of democracy.” Givens added. Dan and Peter brought a GPR system that isn’t normally used in archaeology – the StructureScan Mini XT with the Palm XT antenna. The Mini XT is often used in the remote sensing of rebar, post-tension cables and conduits. This high-frequency GPR system was suspected to be able to give higher resolution of local areas in the church to define activity spaces related to the first representative government in 1619.

A specific part of this survey included burials located in areas that denoted high status. Jamestown records indicate that one burial of interest may be the remains of Sir George Yeardly. The StructureScan Mini XT and Palm XT were used to create high-resolution imagery of the skeletal remains prior to excavation. “This is the first time that we have imaged a human skeleton in such detail with GPR. It’s a big deal because it’s not supposed to be possible. I’m excited to see where this type of survey can be used in the archaeology and forensic fields.” Leach stated. Following excavation of the remains, the FBI and Professor Turi King will conduct DNA test on the teeth and skeletal remains. Jamestown Rediscovery will continue their research and archaeological dig of the site.