Thailand has one of the highest road traffic death rates in the world, with motorcyclists accounting for most of these deaths, according to a 2019 Bangkok Report by Bloomberg Philanthropies. Bangkok, Thailand’s capital and largest city, has a population of 5.7 million and its number of registered vehicles in the city continues to grow at a rapid rate, including motorcycles, which make up 36% of all vehicles. In 2016, more than 850 people died on Bangkok’s roads.

While some road crashes can be predictable and preventable, efforts to systematically reduce crashes in resource-constrained environments have been stymied by lack of accurate, geo-referenced crash and health outcome data to support targeted interventions. As Michael Bloomberg said, “If you can’t measure it, then you can’t manage it.”

In response to this, the World Bank and nine other partners joined the Bloomberg Philanthropies Initiative for Global Road Safety, a $125 million partnership program focused on reducing road deaths and serious injuries in ten selected cities in the developing world.

Under the program, cities receive funding support for three full-time staff to work within city governments like the Traffic and Transportation Department of the Bangkok Metropolitan Administration (BMA) on their road safety initiatives.

“It’s an outstanding initiative that not only develops an evidence-based road safety strategy but also implements all components crucial for road safety operations – from infrastructure improvement, communication and advocacy to enforcement,” said Nuananong Pankumhang, Coordinator of the Bloomberg Philanthropies Initiative on Road Safety in Bangkok. “Having international partners with specific expertise available helps ensure the quality of project implementation.”

Technical assistance from the World Bank and other collaborating organizations have been provided on training and capacity building. To date, over 450 specialists have been trained on road safety engineering. 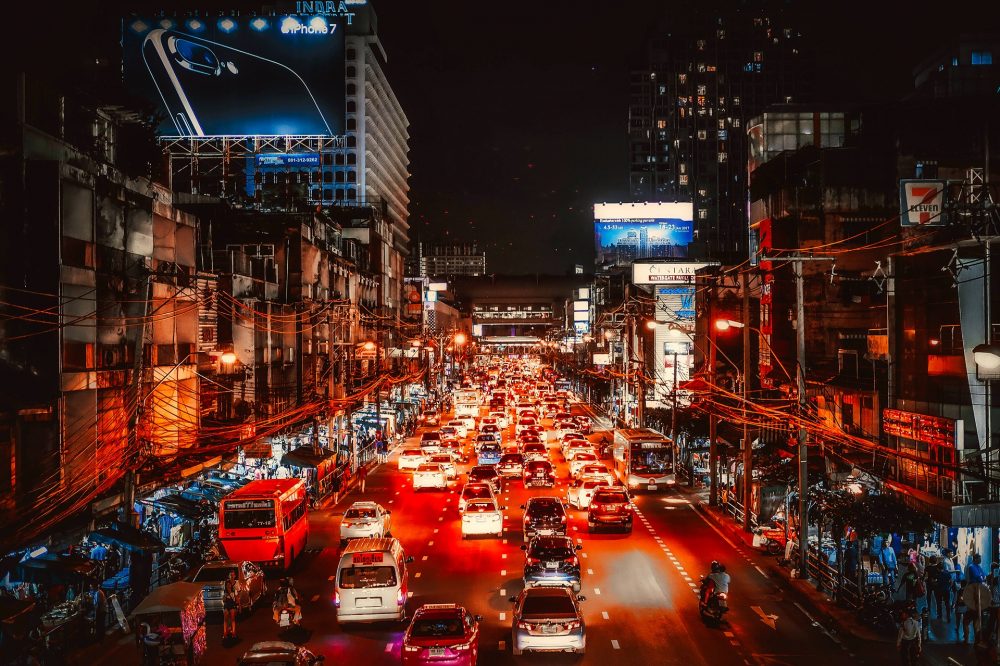 As part of the Initiative, the World Bank, in partnership with the International Road Assessment Program and Chulalongkorn University, has undertaken assessments of more than 1,000 km of high-risk roads during 2015-2018. More than 8 km of roads have been improved since including roads on Asoke, Silom and Yaowarat areas.

Nuananong Pankumhang, Co-ordinator of the Bloomberg Philanthropies Initiative on Road Safety in Bangkok, said: “It’s an outstanding initiative that not only develops an evidence-based road safety strategy but also implements all components crucial for road safety operations – from infrastructure improvement, communication and advocacy to enforcement. Having international partners with specific expertise available helps ensure the quality of project implementation.”

On Asoke Road, a crossing marker was redesigned from 6 metres to 9 metres to make pedestrian crossing safer. Zigzag lines and rumble strips were also added to warn drivers to slow down.

On Asoke Road, for instance, a crossing marker was redesigned from 6 metres to 9 metres to make pedestrian crossing safer. Zigzag lines and rumble strips were also added to warn drivers to slow down. Traffic lights were installed around four crossing areas, as well as a barrier to prevent illegal u-turns and reduce the risk of head-on collisions.

In Yaowarat, a temporary pedestrian fence and traffic cones are deployed from 6 pm to midnight to improve pedestrian safety and to reduce car speeds around the night market. The arrangement increased pedestrian space by 200% during operational hours. While in Silom, a 708-metre green fence was installed in the middle of the road to enforce people to cross properly.

“The Centre of Excellence partnership will ensure the training and accreditation of local experts and ensure that the application of road assessments across Thailand are completed to a high standard expected as part of the global program,” said Rob McInerney, CEO of iRAP.

The plan for ThaiRAP as a self-governed, locally led program is being developed in partnership with other key agencies from the Ministry of Transport, Department of Highways, Department of Rural Roads, Office of Transport and Traffic Policy and Planning and other key stakeholders.

“The World Bank’s role is to encourage countries to improve their performance threshold. In this regard, having a program like ThaiRAP is important for country ownership as they can set what the target policy would be for every road that is being rehabilitated or newly constructed,” said Alina F. Burlacu, World Bank Transport Specialist. “We hope to see Chulalongkorn University working directly with the government stakeholders so that these targets are mainstreamed at the country level. With low-cost road safety engineering measures, so many lives can be saved in Thailand.”