Derbyshire based Chris Ford has amassed over 40-years of experience in the construction plant hire sector. Chris was previously a partner in a crushing and screening recycling business but moved away from it for a while to undertake some agricultural contracting work. The lure of the plant machinery industry was too great and in 2010 Chris made a return by establishing his own business, Derby Crushing and Screening Ltd, which he runs with his son and fellow Director Steve Ford.

The company have a wide range of clients; however, they don’t undertake demolition work themselves but work very closely with several demolition companies on a plant hire basis, one of their most regular customers is East Midlands Demolition.

The very latest addition to company’s fleet is a 30-tonne class Hyundai HX300L hydraulic excavator which they recently took delivery of from their local Hyundai dealers TBS Plant.

The company put the machine directly to work on the former site of one of the old Boots the Chemist’s buildings in Nottingham where they were working for C. A. Blackwell and engaged in crushing and processing approximately 3,000 tonnes of left over demolition rubble down to a recycled 6F2 grade aggregate to be used on the next phase of redevelopment works or sold offsite if needed.

This was their second tour on this site having previously worked there a year before on hire to one of the demolition contractors, during which time they crushed and processed around 10,000 tonnes of demolition material.

This is the company’s first machine from the Korean manufacturer as Steve explained, “Not only is this our first Hyundai, but it’s our first time dealing with TBS Plant. We were very impressed with the level of service we have received from TBS, we initially had a phone conversation with Brian Conn and he later visited us just before Christmas last year, he gave us a few things to think about as we were thinking about doing something early this year, obviously we run a mixed fleet, so we naturally talked to our other suppliers too.”

Steve continued, “TBS didn’t have a demo machine for us to have a go on, but they were able to take us to see another customer who was running a HX300L, we were able to have a good look around it and were very impressed with the build quality, we were also able to get ‘hands-on’ with the machine which was great too, this gave us the confidence to put in the order for the machine and from our experience so far, we feel confident that we will be doing more business with them going forward, next on our list is to replace our wheeled loading shovels which have served us very well but are in need of an update soon.” 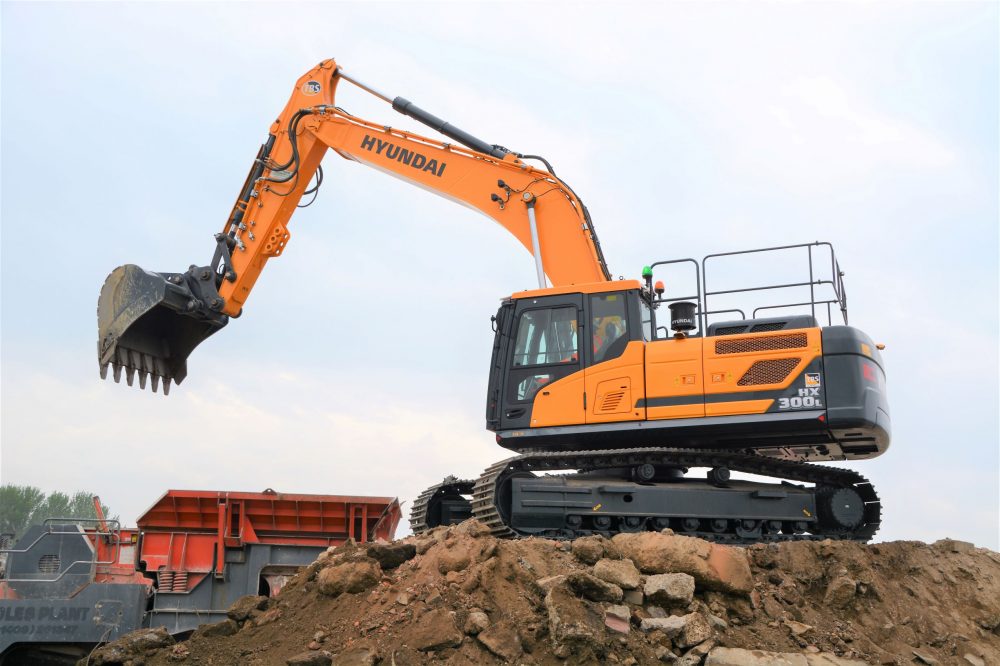 Steve Ford is very much ‘hands-on’ within Derby Crushing & Screening and was operating the new Hyundai HX300L on what was only its second day since taking delivery of the new machine.

Steve was busy feeding the Sandvik crusher. The resulting crushed material was being transferred to a stockpile by the company’s wheeled loader.

Steve said, “It’s early days, but it’s proving to be a nice and pleasurable machine to operate, it’s smooth on the sticks and easy, with minimal effort required and from what I have seen so far it’s going to prove to be extremely economical on fuel.

“It’s also got plenty of power which is great for us when dealing with large lumps of concrete that we encounter in the heaps of material to be processed.”

Steve continued, “I have to say the operator comfort in the Hyundai is first class and even better is the fact that we decided to go for the optional heated air suspension seat, which makes a big difference, it’s a really nice environment to spend long days in feeding a crusher or screener.

“The 8in control monitor display is really easy to use and using the jog-toggle dial to navigate through the various menus is pretty intuitive, it’s very operator friendly. I’m quite a tall lad but I’ve been impressed with how much room there is inside the cab, apparently it’s some 13% more spacious than the inside of the previous model, so I’m happy with that!

“We have also opted for Hyundai’s 360-degree camera system the AAVM (All-Around View Monitoring), it’s our first machine to have this kind of system fitted, but we have noticed an increase in sites asking for the technology to meet health and safety regulations so we thought it would be a good idea, I’ve already found it very beneficial especially when moving around in close proximity to the crusher and skips so in that respect, it’s a very welcome addition, I would have to say visibility from the cab is very good anyway but with the new camera system it just takes it to a whole new level.” 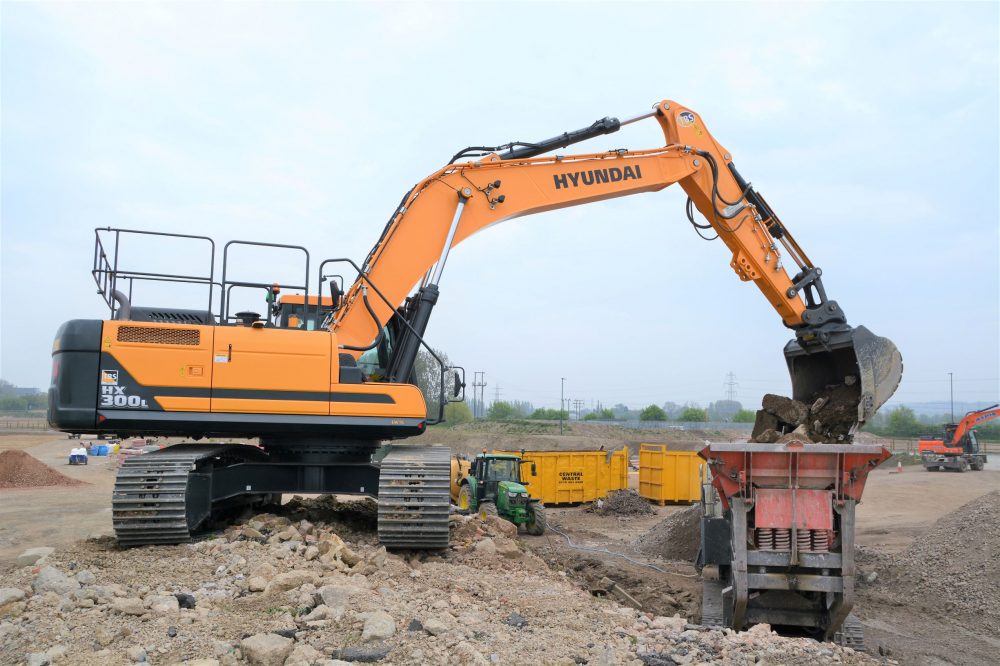 When the HX300L was first launched back in 2015 it represented a massive leap forward in technology especially in terms of the factory fitted all-around camera system which also features (IMOD) Intelligent Moving Object Detection, which warns the operator when people or objects are getting to close to the machine, the system initially picks up objects at a distance of five metres with both visual and audible warnings in the cab offering reassuring feedback to the operator that something is encroaching into his potential working arc.

Tipping the scales at 30,200kgs the HX300L is powered by the well-proven Cummins QSB 6.7 six-cylinder diesel engine which offers a power output rating of 242hp @1950rpm and is EU Stage VI emissions compliant.

The machine was supplied to Derby Crushing & Screening with a few other options which TBS Plant Sales had arranged to be fitted including angled side impact skirts along either side of the upper-structure, a demolition spec bucket ram guard to protect the chrome rod, front cab guard, hydraulic quick hitch, green seat belt light and full fall from height (boxing ring) protection which was supplied by Cab Care.

Steve concluded, “The new Hyundai is a very welcome addition to our fleet and if its early performance is anything to go by, I’m confident it will be the first of many.”