Heavy-haul trailers have come miles since the introduction of their design. After all, they’ve had to keep up with the ever-changing needs of the industry, from larger equipment weight and dimensions to new road regulations.

What once required time-consuming equipment teardowns, multiple trips to and from the jobsite and serious risk of injury, have evolved into some of the most incredibly engineered, specialized trailers in history. And like most innovations, the effort to bring safety and productivity to the jobsite was spearheaded by a few who stepped up to meet these needs of contractors. One of those few was Austin Talbert.

By the early 20th century, the United States’ transformation into the industrial nation we know today was in full swing. The 1930s marked a busy decade for major construction work, which brought with it excavators, trenchers, cranes and a variety of large, over dimensional, heavy equipment that needed to be hauled to and from jobsites. Naturally, the need for specialized heavy-haul trailers to safely move it all was in high demand.

Few trailers at the time could handle the entire weight of heavier machines and none were particularly safe in terms of loading. Large excavators and cranes had to be dissembled just to get the parts and pieces onto multiple trailers, then reassembled once on site, which was incredibly time consuming and costly.

Even light equipment that could be hauled in one piece proved challenging. The task required several people per job using planks and blocks to hoist equipment up and over the tires and axles, before easing it back down onto the trailer bed. This was cumbersome, and the risk of potential injury and equipment damage was high.

At the time, Austin Talbert, founder of Talbert Construction Equipment Co., known as Talbert Manufacturing today, was running his business hauling large equipment for local contractors. He was intimately familiar with and understood the challenges in the workplace. There had to be a safer way of doing things. 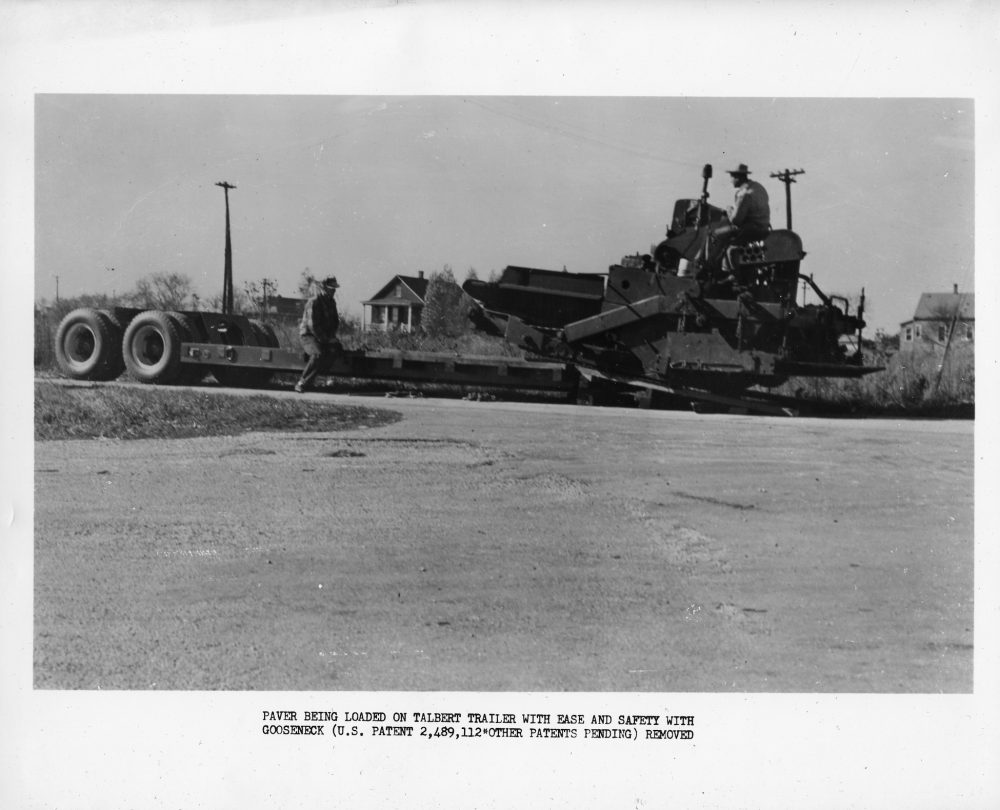 Though Talbert lacked a formal education or engineering training, he made up for it with his ability to develop solutions to problems his customers were facing. Because loading and unloading was incredibly dangerous and resulted in numerous injuries, oftentimes fatal, each year, Talbert was motivated to find a safer and better solution to load and unload equipment. This is how safety, as well as durability and resale value, became the company’s foundation.

In 1938, Talbert enhanced safety by leaps and bounds with the first-ever 60-ton fixed gooseneck trailer with removable rear suspension. Users could remove the rear axles, set the trailer’s back end on the ground, and maneuver equipment onto the deck of the trailer without having to hoist it over the tires and axles as with previous models. This set the wheels of heavy-haul trailer innovation in motion, which was critical for keeping up with the growing size of equipment.

Trenchers were among the 1940s’ largest machines — well over the capacity of the 60-ton fixed gooseneck. Contractors using this equipment were still forced to disassemble and reassemble the trenchers to get them to and from jobsites. In 1946, Talbert again responded to the market need with a 3-axle trailer engineered specifically for this application. The 3-axle design was unprecedented at the time. Its long, sloping tail made loading and unloading trenchers easier. It was the first and only trailer designed at the time that could haul these machines efficiently and safely. 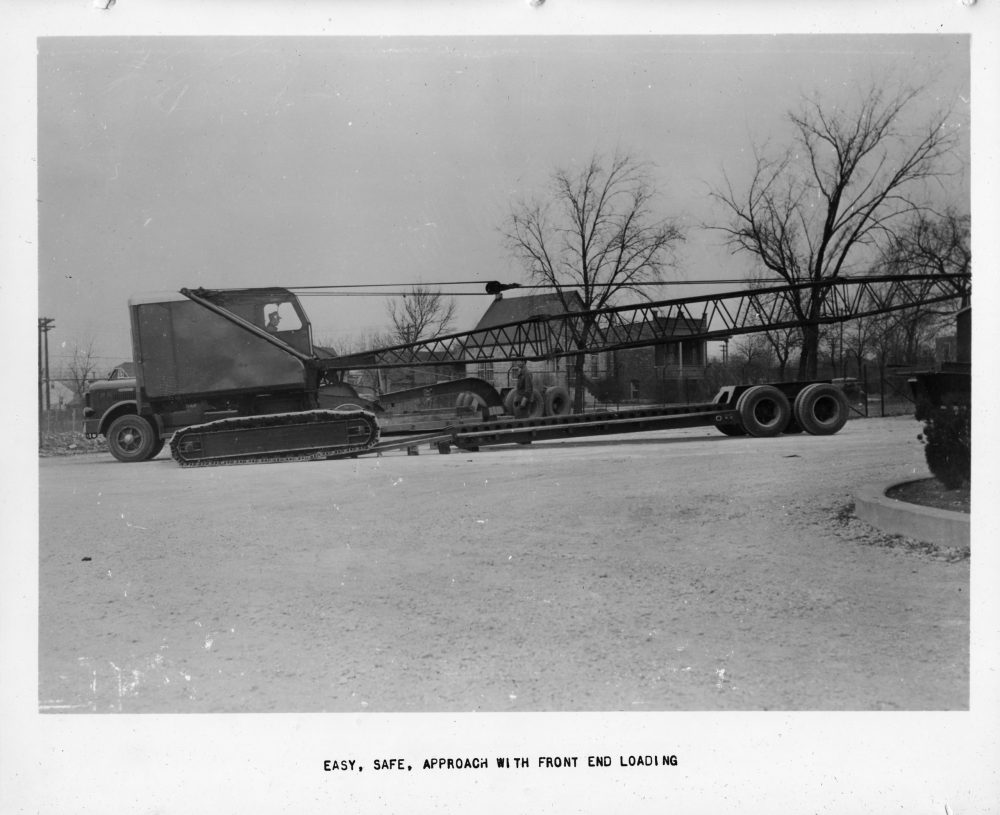 Military applications were also calling for larger equipment in 1946. Military equipment, such as bridge layers, prompted the release of a 7-axle heavy-haul trailer. The Talbert trailer allowed for safe loading and hauling of the some of the heaviest and unique equipment known at the time. In fact, the trailer legally grossed heavy loads virtually unheard of in many areas of the U.S., particularly in the Midwest where the first units were used.

His innovative trailer designs have played a huge role in the safe transportation of over dimensional and heavy equipment, but perhaps the most revolutionary innovation has been, and remains to be, the removable gooseneck. While the design is more than 70 years old, it’s still as relevant today as it was in 1947, at the time of its first patent. 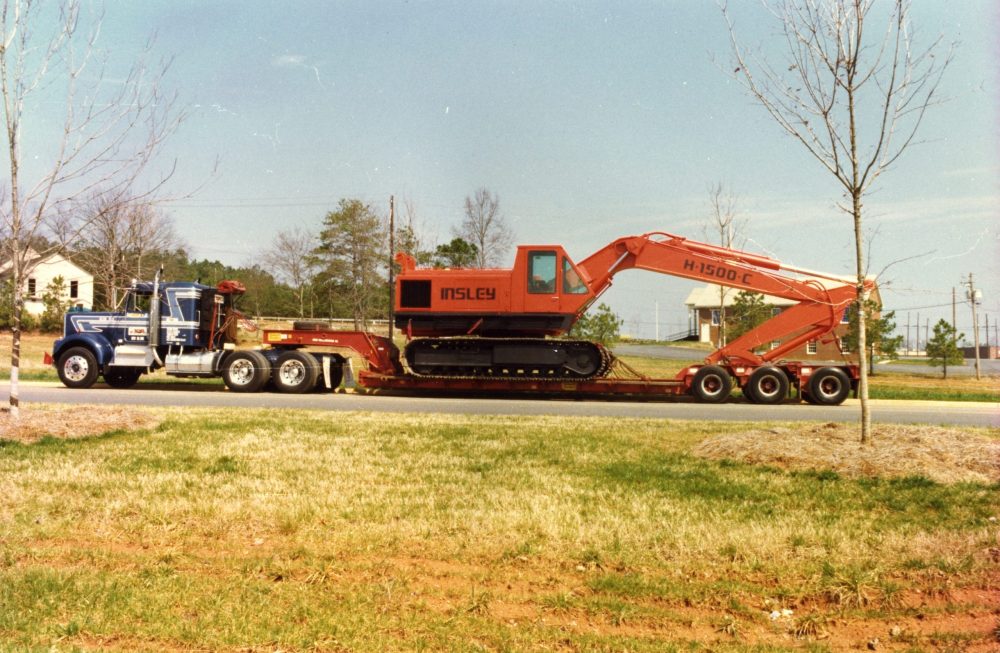 The removable gooseneck did something no other trailer had done before: eliminated the need to use wood block ramps to drive and lift equipment up and over the axles. This capability alone saved, and continues to save, users substantial time, hassle and cost, meaning contractors can be more productive and profitable. What used to take hours to load and off load can now be done in a matter of minutes with a removable gooseneck, an invention in line with Talbert’s vision to provide a safer way to load and haul heavy machinery.

As the years went by, Talbert continued to keep up with ever changing demands and increasing equipment weights with many industry firsts, including the first hydraulically operated non-ground-bearing removable-arch gooseneck trailers. This design prevented the trailer from sinking into the ground as equipment was loaded. In addition, a whopping 500-ton heavy hauler became the largest to date at its launch in 1967. He also designed several trailers to minimize equipment height while hauling. This included the first beam deck trailer that lowered the height of machines, and trailers with recessed rear bridge cross members for taller crane sticks to rest in.

While it was clear that equipment sizes were only going to increase, that didn’t mean trailer weight had to follow suit. In the early part of the 20th century, manufacturers were using high carbon steel to build their trailers, which offered incredible durability, but with one drawback — weight. At a time when the Federal Highway Administration’s enactment of the Interstate System Axle and Gross Weight limits took place, manufacturers faced a challenge: They had to adhere to each state’s regulations yet develop trailers that could handle the increasing loads. 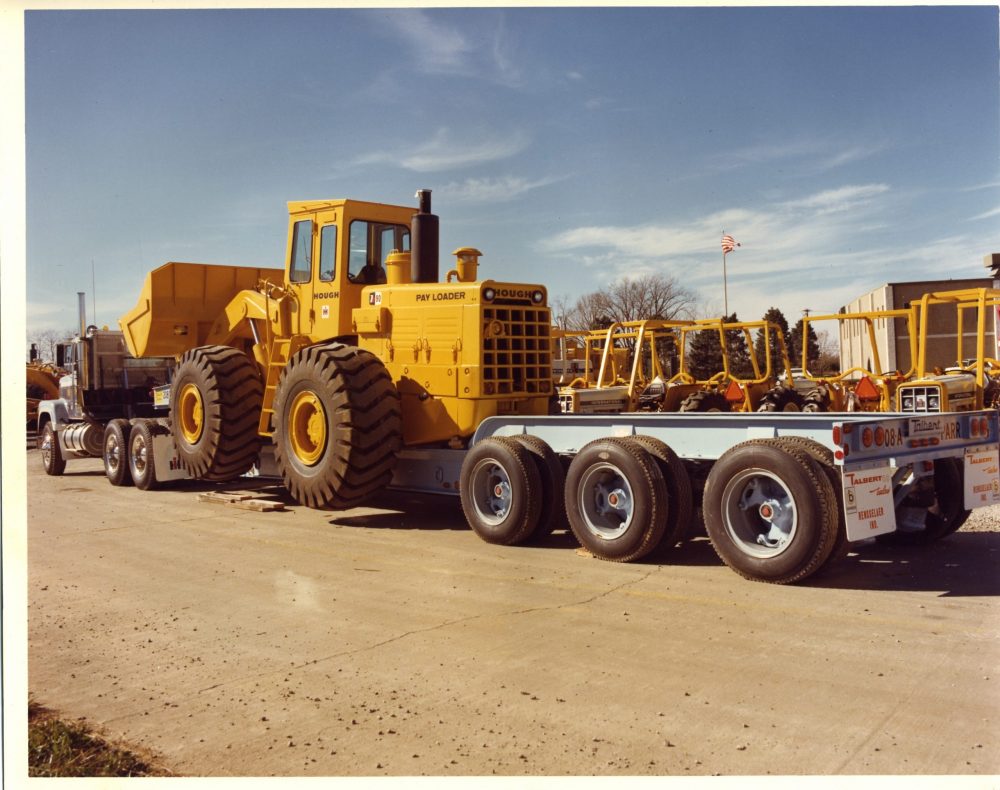 The development of T1 steel helped solve the issue. It offered the durability and longevity of regular steel, yet weighed considerably less than its high carbon predecessor. This meant heavy-haul trailers could be lighter yet hold more weight. In 1957, Talbert launched the first T1 trailer.

While the Highway Administration’s regulations served as a necessary benchmark for road safety and integrity, they also posed plenty of challenges to contractors, particularly during not-so-flourishing times. As many contractors looked to other states for work to keep their companies in the black, winning project bids was the easy part, getting their equipment to the sites was another thing. Many contractors used their existing heavy-haul trailer fleet to move equipment, which in some states required extra permitting and associated costs. Having versatile trailers that could handle multiple types of loads was imperative to minimizing overhead. Manufacturers responded with trailers designed with longer goosenecks and wider axle configurations in efforts of spreading equipment weight further over the span of the trailer, thus reducing the need for weight and, sometimes, over dimensional permits in many jurisdictions.

Over time technology advanced and trailer deck lengths grew from 18 to 30-plus feet. Also, improvements have been made to support better weight distribution and axle loads via load positioning, enhancing trailer performance and efficiency. 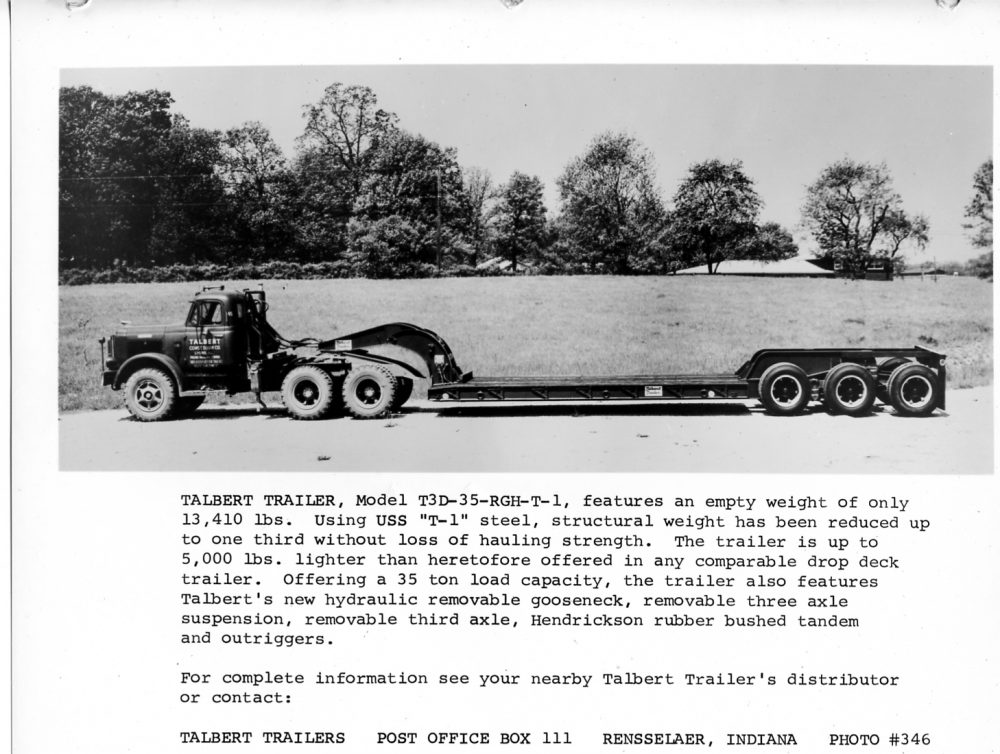 Besides making history with his inventions, Talbert’s trailer legacy would take on a role in other historical events. They’ve been designed to haul sections of the first space shuttle’s wings as well as move stealth bombers and attack boats during World War II. Many specialized trailers have even been used on more unusual projects, including supporting the Kuwait Oil Company’s oilfield rebuild at the end of the Gulf War. Talbert designed, manufactured and delivered two 250-ton trailers in 60 days to aid in the effort.

Heavy-haul trailers have huge responsibilities; they must safely haul large equipment, adhere to height and weight restrictions for their respective regions of travel, and allow for simple, fast, safe loading and unloading of some of the most awkward equipment. But no matter what the needs of the industry have been or continue to be, manufacturers and innovators like Austin Talbert have maintained resiliency and proven if there’s a need, there’s a solution. 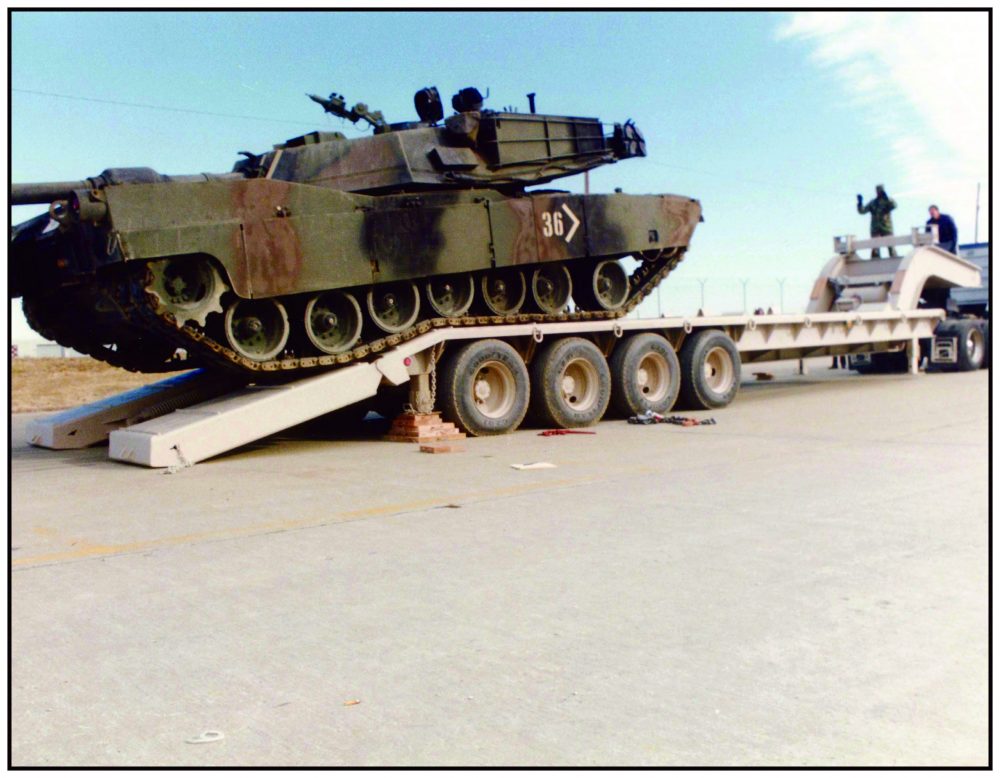 Troy Geisler is the vice president of sales and marketing for Talbert Manufacturing. He has more than 10 years of experience in trailer sales, including three years with Talbert. Troy earned a bachelor’s degree from Purdue University in West Lafayette, Indiana.