Venture capitalist firm 7percent Ventures was confirmed as lead investor on late Monday, investing £200,000 into the round. Hundreds of investors then backed the campaign, with almost half a million pounds invested the following day. The campaign then hit triple the initial target, reaching the stretch ceiling and closing the campaign 24 hours early.

The funding secured will finance SRC’s non-chemical weed zapping robot Dick to field trials, and the manufacture of a fleet of Tom monitoring robots for its commercial weed mapping service. The company’s hugely successful campaign received support from far and wide. Its biggest support came from the farming, technology and ‘eco’ communities.

1759 investors backed the round in total. The campaign cleared nearly half a million pounds in its final day and closed early at triple its initial target.It reached its initial funding target of £700,000 within two days of its launch, hitting £560,000 within minutes.

“We will not invest in any business –however good it might be — which is not a billion dollar opportunity. We are interested in Founders who want to transform a market, not iterate it. Change is the prerequisite to disruption. Therefore, to monopolize a market globally we believe you must fundamentally disrupt it. To do that you must have a product which solves a painful problem in a significantly better way (10x better ideally) than existing solutions, or serves a need which today is not being satisfied in another way,” comments 7 Percent.

“We tripled our target and had to close early. In our wildest dreams, we hadn’t imagined such a landslide success. This overwhelming support really demonstrates the huge appetite for agritech – and the demand from farmers.,” comments Sam Watson-Jones, co-founder, Small Robot Company. “It’s inspiring to see how much support there is for innovation in agriculture. It feels like the time is right for these technologies to start making a difference. We are now very well set for next phase: commercial delivery. We can now begin manufacturing our robots, as well as delivering our weed zapping technology.”

Small Robot Company has now secured nearly £5 million in funding to date, including £1.2 million from its previous Crowdcube raise, and £1.22 million in government Innovate UK grants. This includes an £800,000 grant for its ‘Wilma’ artificial intelligence weed recognition and ‘Tom’ weed mapping technology. This was one of the largest single agritech grants made under Innovate UK’s innovation scheme in 2018. 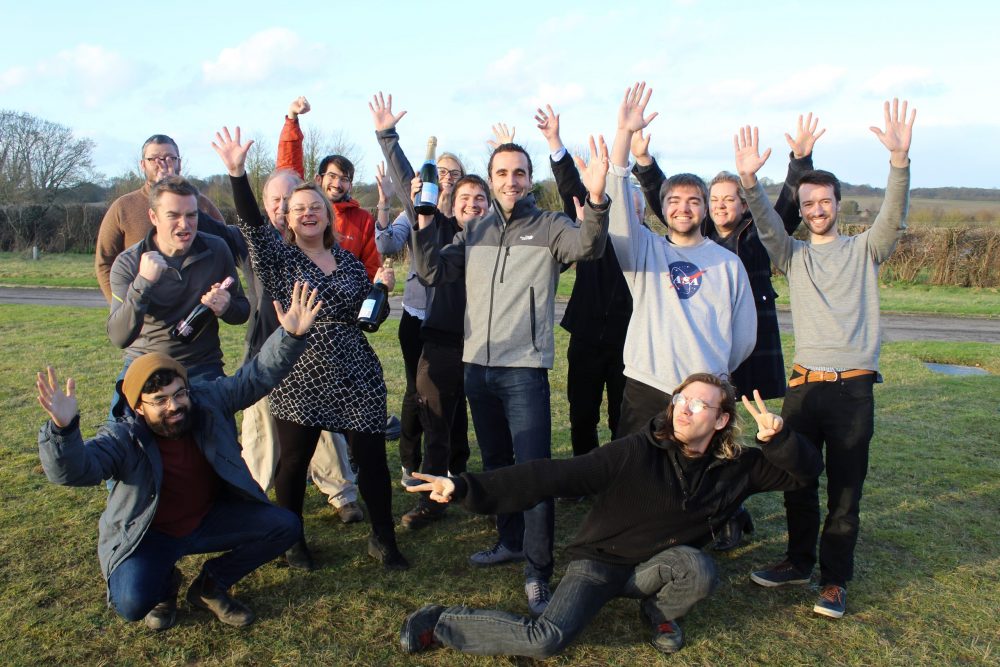 Calum Murray, Innovate UK’s Head of Agriculture & Food, said: “It’s fantastic to see how Innovate UK’s funding has supported Small Robot Company to develop game changing technologies that will revolutionize the agriculture sector. This innovative technology will allow farmers for the first time ever to use non-chemical precision robotic weeding for cereal, whilst saving energy and reducing costs. At Innovate UK, we are proud to be supporting the transformation of the UK’s food production systems, improving productivity and sustainability, and helping the industry move towards achieving net zero emissions by 2040.”

Rob Macklin, the National Trust’s Head of Farming and Soils, comments: “Technology needs to play a big part in solving many of the issues we currently face in farming – particularly improving soil health and carbon sequestration, reducing our reliance on fossil fuel power and fertilisers and avoiding the adverse impacts of synthetic chemicals on the environment. We have started small robot trials at Wimpole and intend to extend trials to other estates in the near future.”

Dr Belinda Clarke, Director, Agri-TechE, comments: “The pace of agri-tech innovation in the last 5 years has increased rapidly in recent years and is already showing commercial impact on farms. New tech solutions are poised to make an even more dramatic contribution to increasing the efficiency, productivity and sustainability of global agriculture. Game-changing technologies, coupled with creative, effective partnerships will be key to making this a reality, and those pioneered by Small Robot Company are great examples of how this is happening in practice.”

Tom Allen-Stevens – farmer, editor of Crop Production magazine and previously Oxford Farming Conference chair, investor and SRC farmer advisory group comments: “I do seriously believe that Small Robot Company’s technology is going to deliver a step change in how we farm and how we think about farming in the future. And if you want to be part of that journey, then there’s no better way than to invest in the small robots and come along with it. Small Robot Company’s impact is still resonating out and they could have a profound impact on how this industry shapes up.”

Andrew Ward, MBE and Farmers Weekly Farming Champion, investor and SRC farmer advisory group says: “I invested because robotics and automation are going to be at the heart of agriculture. Environmental care coupled with efficient and profitable food production. We’re under pressure to use less chemistry and less inputs on the crop – applying products to 100% of a field needs to change. Robotics is the way forward. Investing will help Small Robot Company develop these robots into useful tools for our future. This is the fourth agricultural revolution.”

Will Evans, farmer and farming industry Influencer – Rock & Roll farming podcast – SRC Farm Ambition and 100 Club member concludes: “I invested because I believe Small Robot Company’s vision encapsulates the future of agriculture – and the scale of opportunity is huge. We’re on the cusp of tremendous change. SRC’s tech is front and centre of the fourth agricultural revolution. And I’m impressed by the talent and tenacity of the team. They’re the ones taking farming forward.”

Sam Watson Jones concludes: “The opportunity is immense. Our technology is closely aligned with the new Agricultural Bill: our technology is at the heart of these systemic changes in farming. Now is the time for us to work together to create a more sustainable farming model: and for farmers – rightly – to be rewarded for their efforts. The recent huge advances in agtech finally make this possible: and farmers are integral to the environmental solution.”