NEOM announced its first step to create the world’s leading cognitive cities that rely on leading technology for digital services after signing a contract with stc group to establish a 5G network infrastructure that will accelerate NEOM’s digital ambitions.

In addition to the one-year contract to develop the network, the partnership also includes the development of an innovation centre in NEOM to explore new 5G opportunities.

NEOM’s next generation cognitive cities will support its cutting-edge urban environments, improving the lives of residents and businesses far beyond the capabilities of today’s smart cities. NEOM will use one of the most advanced 5G technology in the world, to enable the proactive exchange and analysis of data between NEOM residents and city infrastructure.

Commenting on the agreement, NEOM CEO Nadhmi Al Nasr said: “We are glad to form this partnership with a leading national digital enabler such as stc to support our ambition and goal to be an accelerator of human progress and to create the world’s leading digitally sustainable, cognitive cities. NEOM’s infrastructure will utilize AI, robotics, and human-machine fusion to deliver greater predictive intelligence and enable faster decision making across all NEOM sectors. The procurement and deployment of a future-proof wireless network is a critical first for NEOM in realising our goal of driving innovation in the future digital economy.”

The CEO of stc Group, Eng. Nasser bin Sulaiman Al Nasser, added: “This agreement reflects stc’s commitment to enabling digital transformation and providing digital solutions across the Kingdom. We are proud to have been chosen to build the infrastructure for the 5G network and an innovation centre in NEOM – the land of the future and a model for sustainability, innovation, development, and prosperity.” This agreement comes in line with stc’s vision as a digital enabler to develop infrastructure and provide the latest technologies that will enrich the experience of societies and foster innovation, which in turn will contribute to improve the customer experience and moving the digital transformation forward. 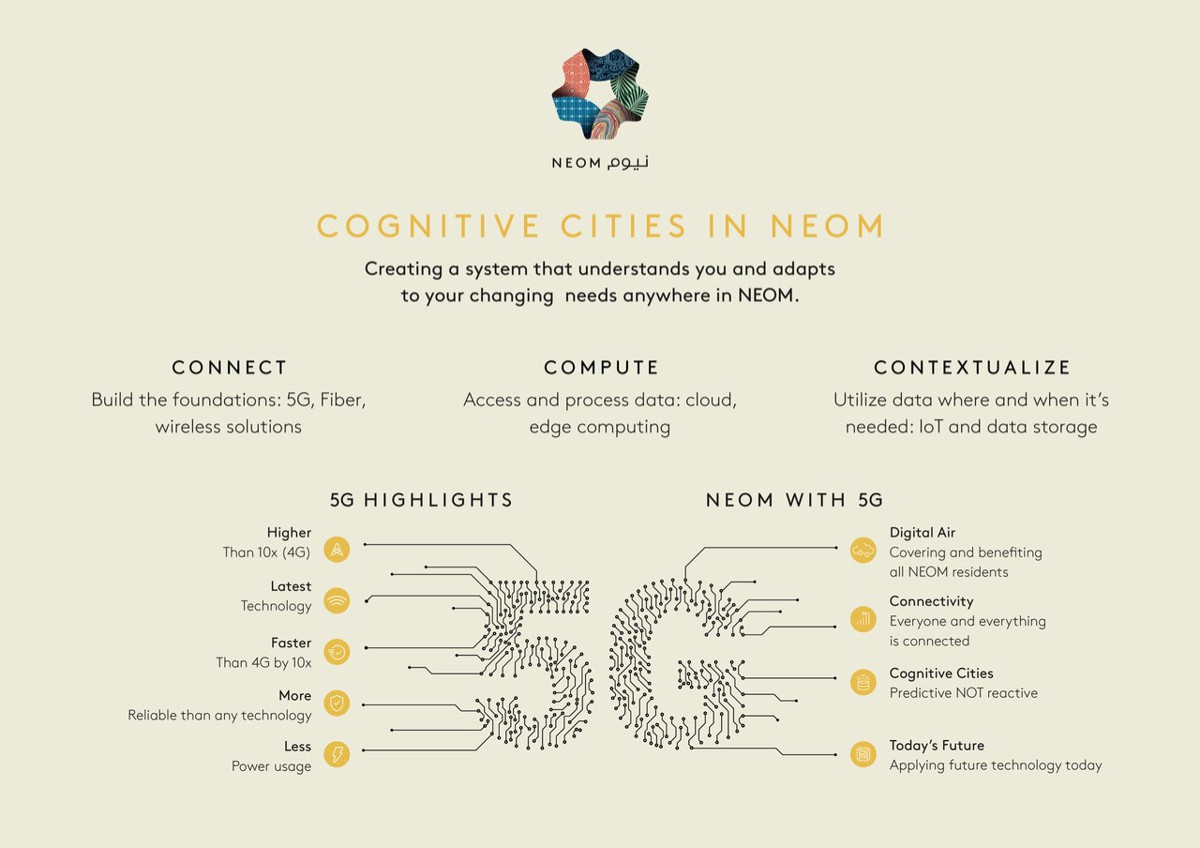 NEOM will also trial and test 5G solutions that will allow it to lead in fast-growing, future-focused sectors such as robotics, Artificial Intelligence (AI), and human machine interface technologies. Leveraging such technology will open up the enormous potential of NEOM as a new economic driver across a range of industry sectors for the Kingdom.

NEOM is an accelerator of human progress and a vision of what a New Future might look like. It is a region in northwest Saudi Arabia on the Red Sea being built from the ground up as a living laboratory – a place where entrepreneurship will chart the course for this New Future. It will be a destination and a home for people who dream big and want to be part of building a new model for exceptional liveability, creating thriving businesses, and reinventing environmental conservation.

NEOM will be the home and workplace to more than a million residents from around the world. It will include hyperconnected, cognitive towns and cities, ports and enterprise zones, research centres, sports and entertainment venues, and tourist destinations. As a hub for innovation, entrepreneurs, business leaders and companies will come to research, incubate and commercialize new technologies and enterprises in ground-breaking ways. Residents of NEOM will embody an international ethos and embrace a culture of exploration, risk-taking and diversity – all supported by a progressive law compatible with international norms and conducive to economic growth.

0 0 0
Previous : Revolutionary Solid-State Batteries will create a $6 Billion market by 2030
Next : A new £70m Automotive Powertrain Research Centre is to be built in the UK