Finning UK Ltd, exclusive dealer of Cat® equipment, has been awarded a prestigious gold standard employer award in acknowledgement of its continuous support for the armed forces community.

The award highlights Finning as an exemplar within the industry sectors that it works including construction, power generation, waste management and paving, by advocating support for the armed forces. 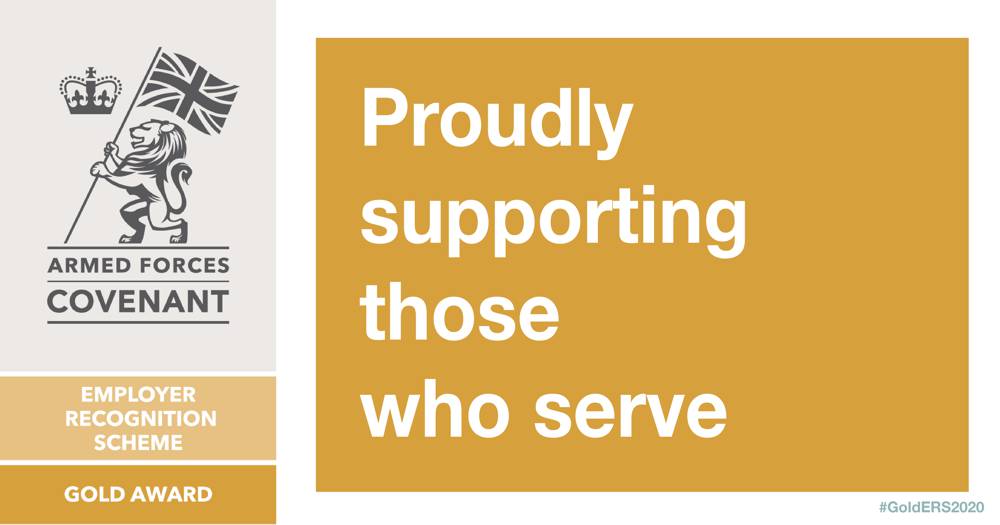 The company joins an elite group of organisations that includes Microsoft, Greater Manchester Police and the Post Office granted the Employer Recognition Scheme (ERS) Gold Award by the Military of Defence, with the Secretary of State for Defence making the official announcement on July 30, 2020.

The scheme, now in its seventh year, recognises those companies that support the armed forces by proactively demonstrating a forces-friendly approach as part of their recruitment process, as well as having distinct HR policies for employees that are military veterans, reservists, volunteers or family members of those serving in the armed forces. In addition, companies are recognised because of their efforts to advocate the benefits of supporting those within the armed forces community and encouraging others to sign the Armed Forces Covenant and to engage in the Employer Recognition Scheme.

Finning currently employs 27 military veterans and two reservists across its UK operations. Lisa Craddock, recruitment manager for Finning, submitted the nomination on behalf of the company. One of her team, Chris Clarke who is himself a military veteran, helped with the application. Clarke joined the army in 1999, eventually being promoted to Lance Corporal working as a Royal Electrical and Mechanical Engineer where he repaired armoured vehicles. He left the service in 2007 and after working for a number of plant and HGV companies, joined Finning in 2012 to work as a repair rebuild engineer at the company’s Llantrisant depot in Wales.

“As a former member of the armed forces it’s very important that employers are recognised for the ways in which they provide support to the armed forces communities,” explained Chris Clarke, “I nominated Finning for the scheme because I’ve seen first-hand it’s unwavering commitment and support for those coming out of the military to work as a civilian, which can be a real challenge. Finning has recognised my potential and given me many opportunities that I didn’t have in other civilian jobs, allowing me to learn skills and challenge my abilities.

“This is a tremendous honour for Finning and is a testament to the company going the extra mile to support our armed services,” said David Primrose, managing director of Finning UK.

“Finning has always had a good relationship with the military and is proud to be part of the Armed Forces Covenant. The gold award emphasises our respect for all of the armed forces as well as their families and the wider community. Our support highlights the contribution of former service personnel and volunteers and we’re proud to play an active role during and after their service to our country.”

Phillip Sinclair, Regional Employer Engagement Director for the Military of Defence said: “I am pleased to confirm that Finning UK Ltd has been awarded Gold level recognition for the fantastic support and advocacy the company displays for the Armed Forces Community. I am delighted for Finning, having been a part of that journey and look forward tremendously to an ongoing business relationship. Welcome to the Gold Alumni!”

This year’s 127 award winners join a group of 226 winners from previous years bringing the total to 353 organisations who can share their knowledge and experience on the benefits of employing those from the Armed Forces community.