There are many different types of interchanges. Each type of it has some advantages and disadvantages in a particular surrounding. We present a new solution for the highway interchange, which in most comparisons achieves very good and in many things the best results.

The characteristic of this interchange is that in the area of the interchange the opposite carriageways of a single highway (roads) are separated to the extent that in the middle there is space for left directional ramps. That’s where the name comes from: Inside Turning Left Interchange (ITL Interchange). 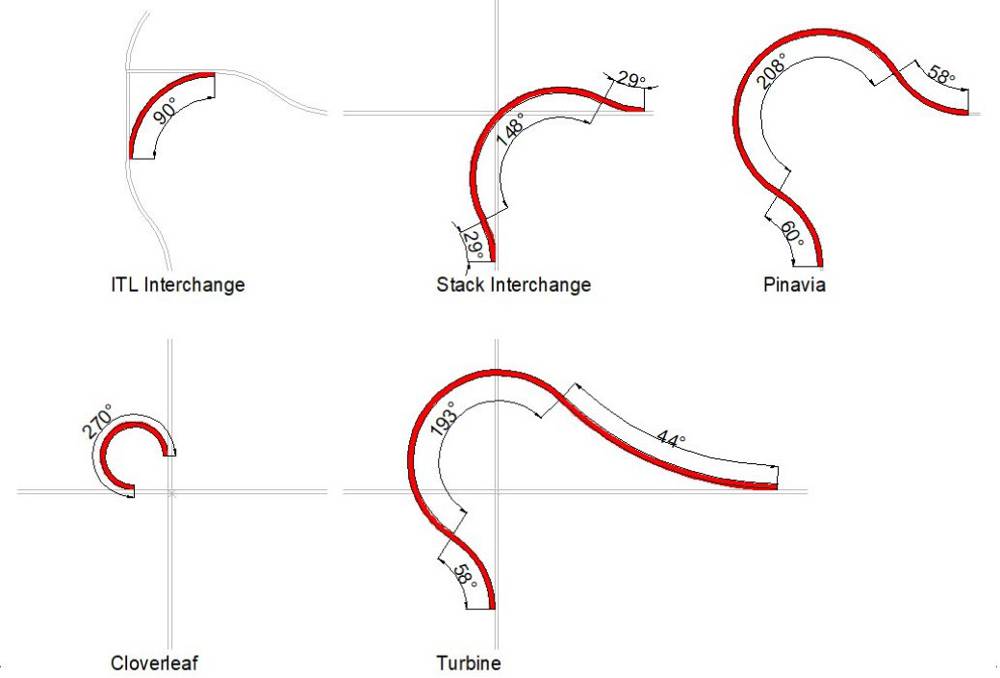 The directions described apply to countries where the right-hand drive rule applies. In the case of driving on the left, the situation is reversed. There are right directional ramps in the middle of the intersection.

ITL Interchange left turning ramps are much shorter than all other known solutions for interchanges. The interchange is built in two levels. These two facts significantly lower the cost of construction. 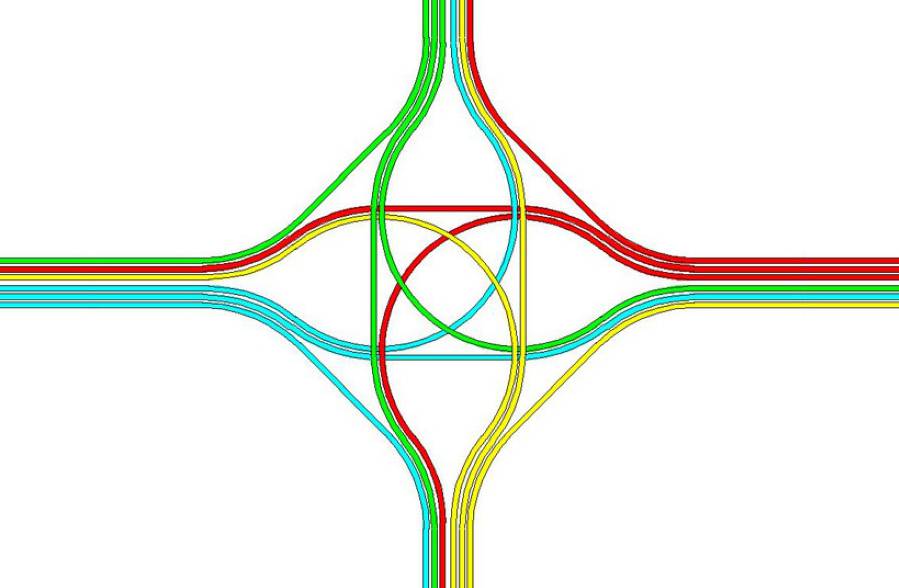 We have two big challenges in designing Itl Interchange. The first challenge is vehicles sorting before the interchange. An even bigger challenge is level change of the slip road for turning to the left.

At a sufficient distance before the interchange on the highway (at least 1500 m), it is necessary to limit the speed and inform the drivers with the vertical and horizontal signaling which lane leads to which traffic direction. This also helps avoid unnecessary weaving within the interchange and prepare drivers for timely sorting.
The ITL Interchange is suitable where traffic is approximately evenly distributed in all directions. The inner lanes lead to left directional ramps. Vehicles that turn to the left do not change the lane. Vehicles driving straight or turning to the right, move to the right-hand lanes before the interchange.

Left directional ramp has to remain on the unchanged level until it crosses both of the left directional ramps at the opposite level. This length is about 2/3 of the entire length of the directional ramp. Therefore, there is a very short distance to pass to come to the opposite altitude level. Sharp vertical convex and concave curves allow significantly lower speeds than allowed by a horizontal turn. In order to mitigate vertical curves, we use a trick to slightly raise the level of both roads in the diagonal corners. In the other two diagonal corners, the level of the roads should be slightly lowered. The straight lane must also be adapted to these level changes. 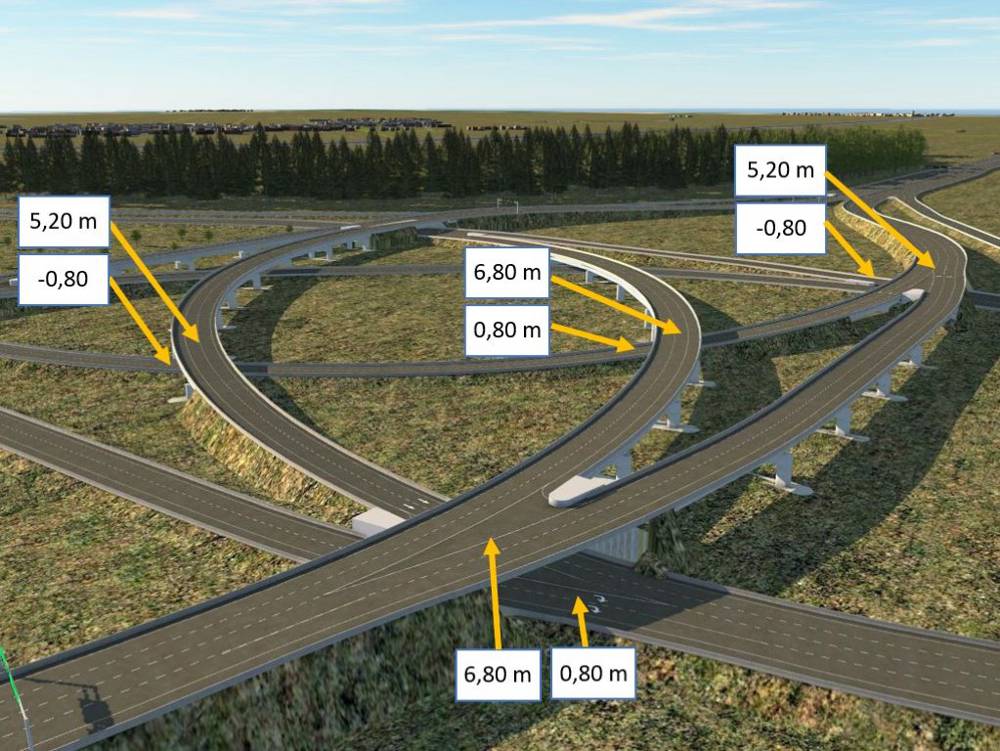 Comparison is made for interchanges which allow higher speeds also on the left directional ramps and thus ensure greater traffic capacity. These interchanges also have no conflict points. This group includes: Stack Interchange, Turbine and Pinavia.

Comparison is made for interchanges with horizontal radius for the left directional ramp R=250 m. This radius allows driving at a speed of 80 km/h. In case of the Cloverleaf on the same area, horizontal radius is R=100 m for turning to the left. 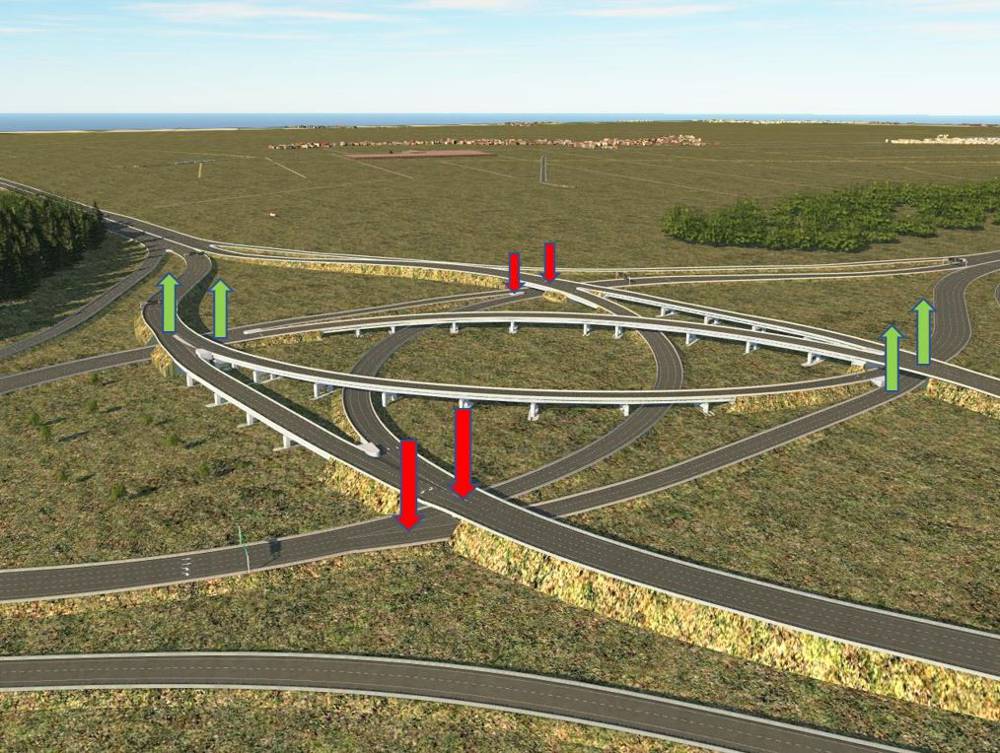 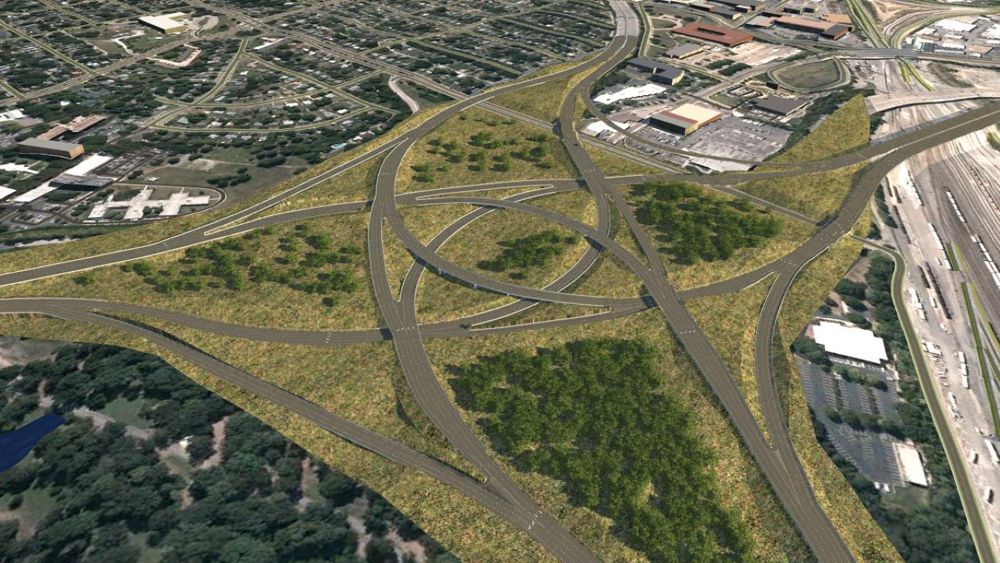 Stack Interchange, Turbine and Cloverleaf have a completely straight lines when driving through. ITL Interchange has a slightly longer distance due to the separation of carriageways. Pinavia has an even longer distance because lanes run along the circle.

Construction for right directional ramps is similar in all cases. ITL Interchange and Stack Interchange have the shortest length of ramps. The Cloverleaf and Pinavia have an approximately double length, and Turbine, due to its size, has about a triple length according to the most favourable variants. 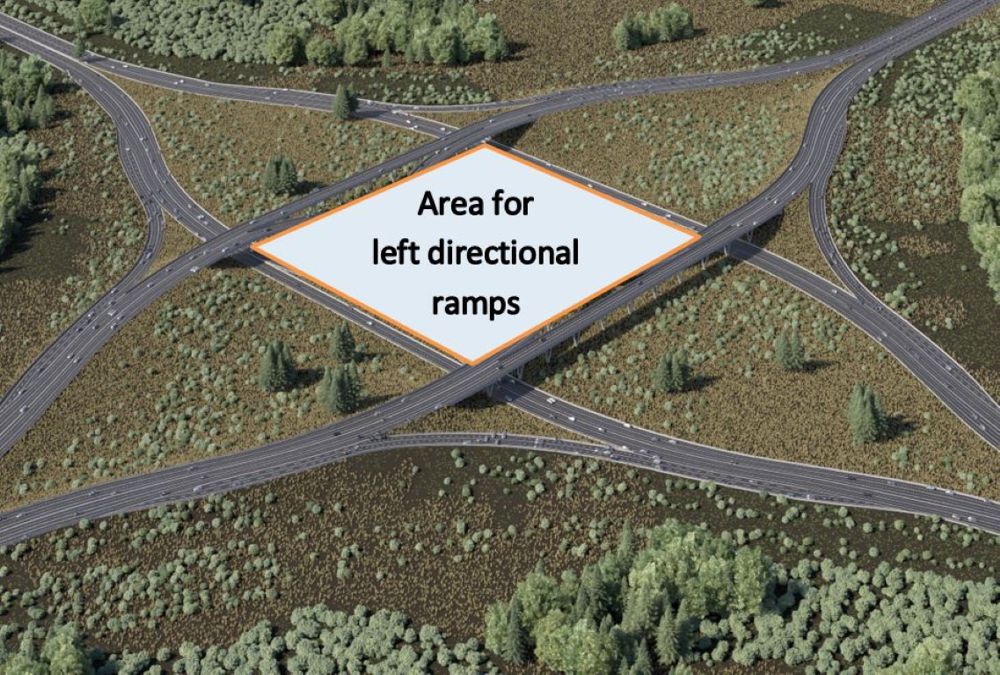 However, construction for left directional ramps totally differs. There are the greatest differences between compared interchanges. Ramps mostly lead over the overpasses. ITL Interchange has an extremely short length of ramps. A little longer distance is in the Cloverleaf, but due to the small radius, there is a lower speed limit. The distance is greater by factor 2 on Stack Interchange and more than by factor 3 on Pinavia and Turbine.

The results of the geometric comparison are shown in the table below:

Performance measures of ITL interchange and comparison with other types

Traffic simulation techniques has been used since early development of traffic theory. Therefore, delay analysis of ITL interchange has been done by microsimulation software, which we usually use for the analysis of complex traffic problems at intersections and interchanges.

Microsimulation software tool is the ideal for setting up a clear and conclusive knowledge basis for decisions for all kinds of traffic engineering questions and can provide the analyst with valuable information on the performance. The microsimulation has been designed for analysing and modelling transport networks of any size, and traffic systems of all types, from individual intersections right up to entire conurbations.

In this paper we focused on Delay, Average Speed and Distance Travelled. We analysed one traffic distribution test matrices (Table 2): ρ1 (1/3 of entry traffic crossed the intersection, 1/3 turned left and 1/3 turned right). Performance measures should be sensitive enough to differentiate between analysis scenarios and therefore we used three different load scenarios (2500 veh/h, 3500 veh/h and 4500 veh/h). The fleet composition included in the highway network reflects most common composition on the Highways including passenger cars (90%) and heavy good vehicles (10%). 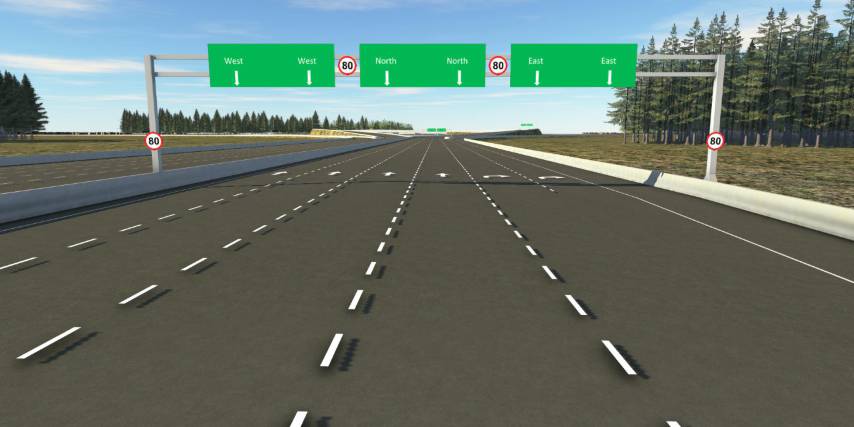 The results of traffic simulation are shown in Table 2. At lower volumes (2500 veh/h) the performance is almost identical for all interchange designs. For middle volume (3500 veh/h) Cloverleaf and Turbine interchange designs are already over congested with Average Delays higher than 140 s/veh. The Average speed drops below 40 km/h in Cloverleaf and 46 km/h in Turbine design.

For highest volume traffic scenario (4500 veh/h) only ITL and Pinavia Interchange can throughput the demand with slightly lower delay of ITL; 10,2 s/veh than Pinavia: 13,6 s/veh. Total Delay time of ITL is 25% lower than Pinavia (51 hours vs 68 hours) and the travel distance of ITL is 3,6 % less than Pinavia.

Some measures may not be clearly understandable to the reader of this paper and therefore additional explanation is provided. If we compare Dist. Total (km) in Table 3 for the ITL and Turbine design, there is much less distance travelled for Turbine design, which can lead to misunderstanding that this design has much better performance. In the sum of this measure there are all vehicles that are in the network or have already left it. For Turbine, volume scenario 4500 veh/h, the performance of Average Delay is very high (295,8 s/veh) and therefor many demands are not served and as result much less Total kilometres travelled.

In this paper we analysed new type of ITL Interchange and compared with conventional designs Cloverleaf, Pinavia, Stack, Turbine.

ITL Interchange has proven to be a very good or the best choice in all benchmarks. 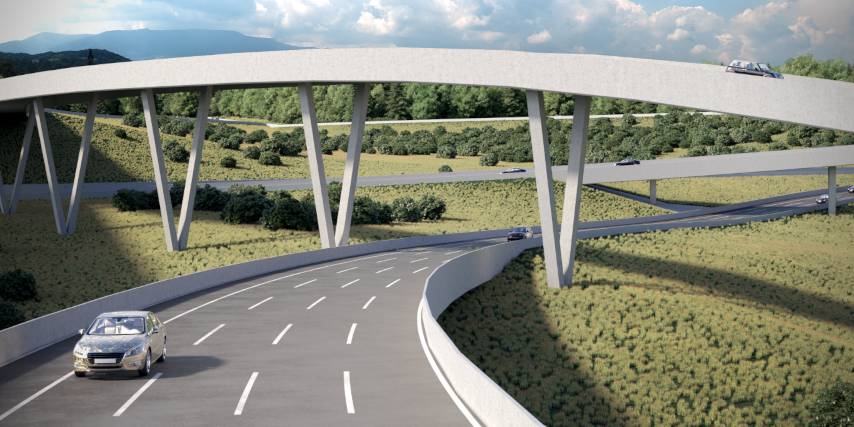 The following conclusions can be made from the Performance analysis: 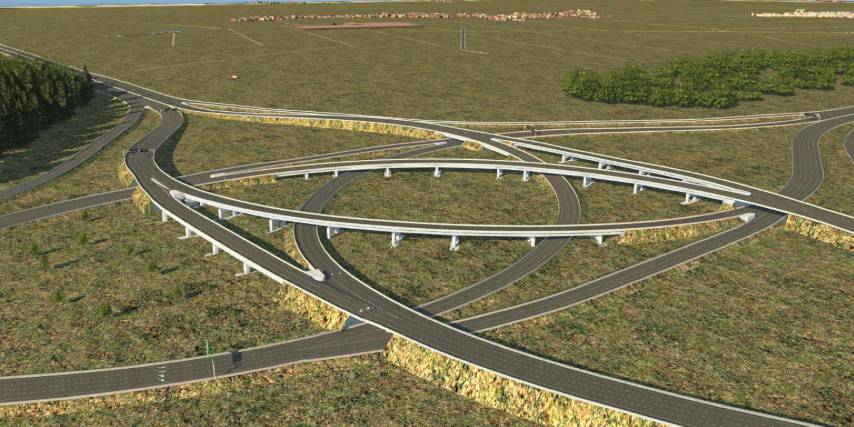