Traditionally the business looks to buy quality used kit with low usage hours, however, Shenstone have just purchased their very first brand new machine, a stage V Hyundai HX300AL, which is a replacement for an outgoing R 300LC-9A machine.

The HX300AL is the very first Stage V model to be delivered into the UK market, with this one being supplied by local Hyundai dealers Willowbrook Plant Sales.

It was the tail end of 2015 when Hyundai launched its HX excavator series. At the time the new range was described as a ‘quantum leap’ in excavator safety and design. Now five years after the launch we see the arrival of the latest incarnation of the HX range, the A series, complete with its fresh new look with the dark grey boom and dipper. Whilst the new livery maybe the first thing to catch your eye, there are other subtle changes on the machine and under the bonnet, behind the panels and in the cab area.

AdBlue and an all-in-one exhaust aftertreatment system is again the preferred way to achieve the low emissions levels whilst further improving efficiency. Operators can also learn to develop the most efficient working habits by observing Hyundai’s Eco Report function on the dashboard which displays real-time feedback on the machine’s performance. 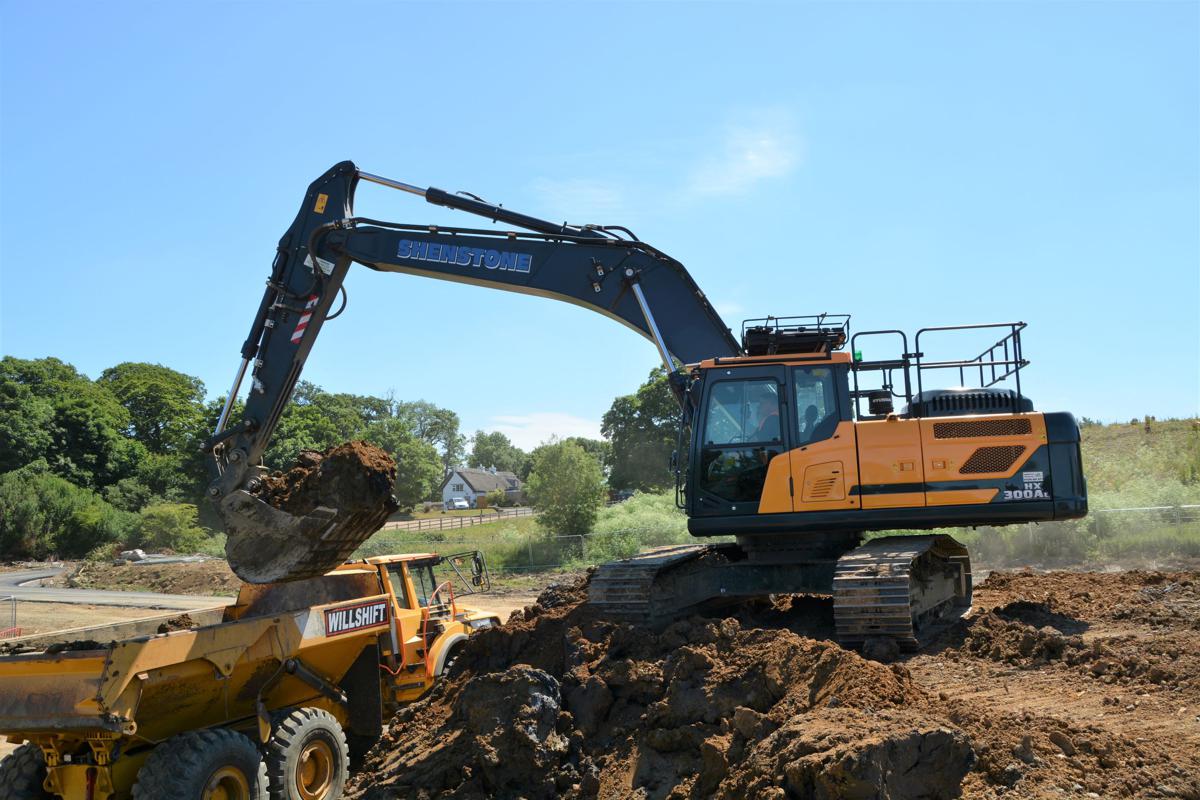 New smart technologies have been installed to further improve machine productivity and fuel efficiency, in a move away from hydraulically controlled pumps, Hyundai has installed its new EPIC (Electronic Pump Independent Control) system.

The already well-appointed Hyundai cab has had another makeover, most notably as you approach the machine you notice the lower glass area in the door has been increased to improve visibility to the operators left.

Cosmetically inside the cab there are splashes of yellow plastic trim along the side of the left-hand joystick consul and around the numerous air vents that are situated around the cabin providing plenty of cooling air supply for those long summer days in the seat.

The machine also benefits from a luxurious Grammer air-suspension seat which has been supplied with the optional heater set up.

Hyundai’s impressive 8” touch screen monitor is retained and provides the operator with all the usual machine status feedback and a variety of options that can be accessed via the menu settings, which can be selected by the touch screen itself, or by using the familiar Haptic jog-shuttle rotary controller situated on the right-hand joystick consul just behind the joystick itself. This enables the operator to fine tune the machine to suit his requirements and operating style and to be able to enter a password code to start the machine. The familiar Hyundai push button stop/start system is still the standard fitment.

When the HX range was launched in 2015 the AAVM (Advanced Around View Monitoring) which uses four cameras located around the machine, was seen as a ground-breaking development and it really is a superb feature in terms of visibility.

Hyundai’s Intelligent Moving Object Detection (IMOD) system also remains the same, warning the operator visually and audibly if anyone on the ground is moving in close proximity of the excavator.

The regular operator on this machine is Mark King (33), who has worked for Shenstone Plant for around six years. He had been running the companies R 300LC-9A before taking delivery of this brand-new model. Previously to this position he was operating for another local firm, James King Plant of Blisworth. 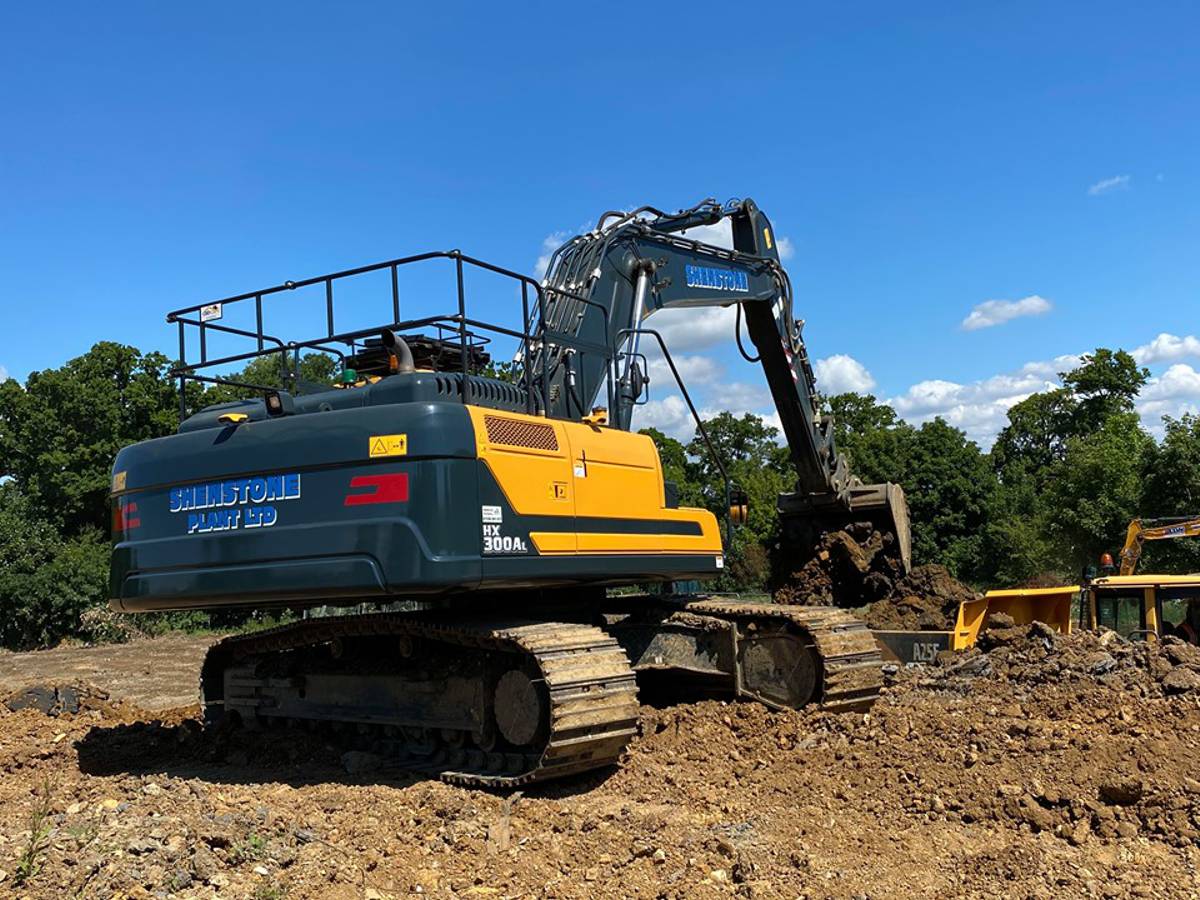 The HX300AL is right up there with the best of them

Talking about the HX300AL Mark said, “Overall I think it is a really good machine, I think it has a lot more grunt and power in the dig compared to the older models, there’s not much that I don’t like about it to be honest, I really think this machine is right up there with the best of them, nice and smooth on the controls and a nice cab to spend a shift in, I’m delighted with it!”

Mark reports that fuel economy is very good and that his is achieving two days work from one full tank, and two full tanks of fuel to one tank of AdBlue.

Shenstone’s do not employ any fitters but they use the services of a guy who was a former service technician for the Caterpillar dealers, Michael Abbott who set up his own business and performs all their servicing work and any emergency breakdowns.

Summarizing owner Nick Bennie had good things to say about the Korean built machines, “As a business we find them to be incredibly good value for money, when you compare them to competitors’ brands. And there is no doubt about it, they have come on leaps and bounds since the earlier models and are now up there with the best of them.

“We have a varied fleet, but on the performance from the Hyundai’s so far, we expect to be buying more in the future if the deal is right for us, I see no reason why it shouldn’t be as Willowbrook have always served us well.”