A third Volvo L150H loading shovel has been supplied to Albion Stone for its mining operations at the Jordans and Bowers mines on the Isle of Portland.

Joining the two existing L150s that were supplied in 2014 and 2016, the new arrival will take over the primary duties of extracting and rehandling blocks of Portland stone from the mine face, as well as conveying them to the stock yards and designated block cutting areas of the works.

“Our original machine has clocked up over 10,000 hours, so we considered it was time to replace this with a fresh machine and put the older unit onto secondary duties,” says Operations Manager Dan White. 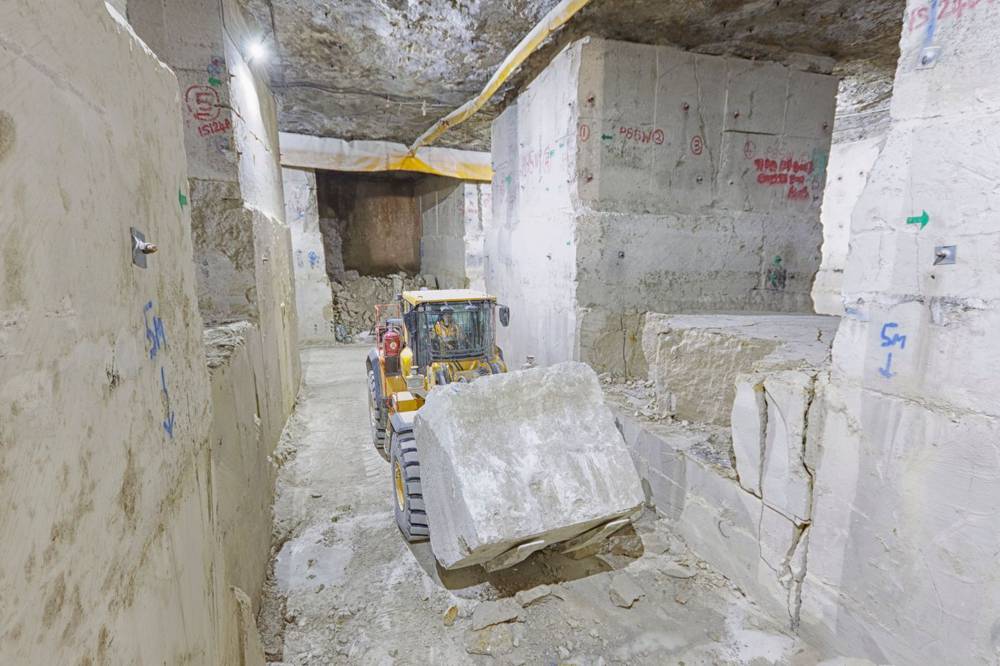 Unlike the two older units that had to be supplied with reduced height operators’ compartments, the new L150H has been supplied with a conventional cab. “Since those machines were delivered, we have made a significant investment in our drilling operations inside the mines to increase the roof horizon and maximise our production capability. This means we can now utilise a conventional loading shovel without a significant amount of modification,” continues Dan. “Furthermore, having such a reduced cab height meant our operators had a restricted field of view, so using a standard cab means better visibility and, ultimately, a more conventional machine to sell on if we so wish in the future.”

The new L150H features a hydraulic quick hitch, to facilitate the easy change-over of the existing attachments from the previous machines. These include a 3.8m³ spade nose rock bucket for cleaning up, as well as heavy duty 1500mm block handling forks that are capable of handling blocks weighing anything from 7 to 12 tonnes. Whilst the L150H has plenty of breakout torque to prise the majority of part-sawn blocks from the mine face, there is the occasional need to encourage some more awkward blocks away from the face; particularly from the mine roof. 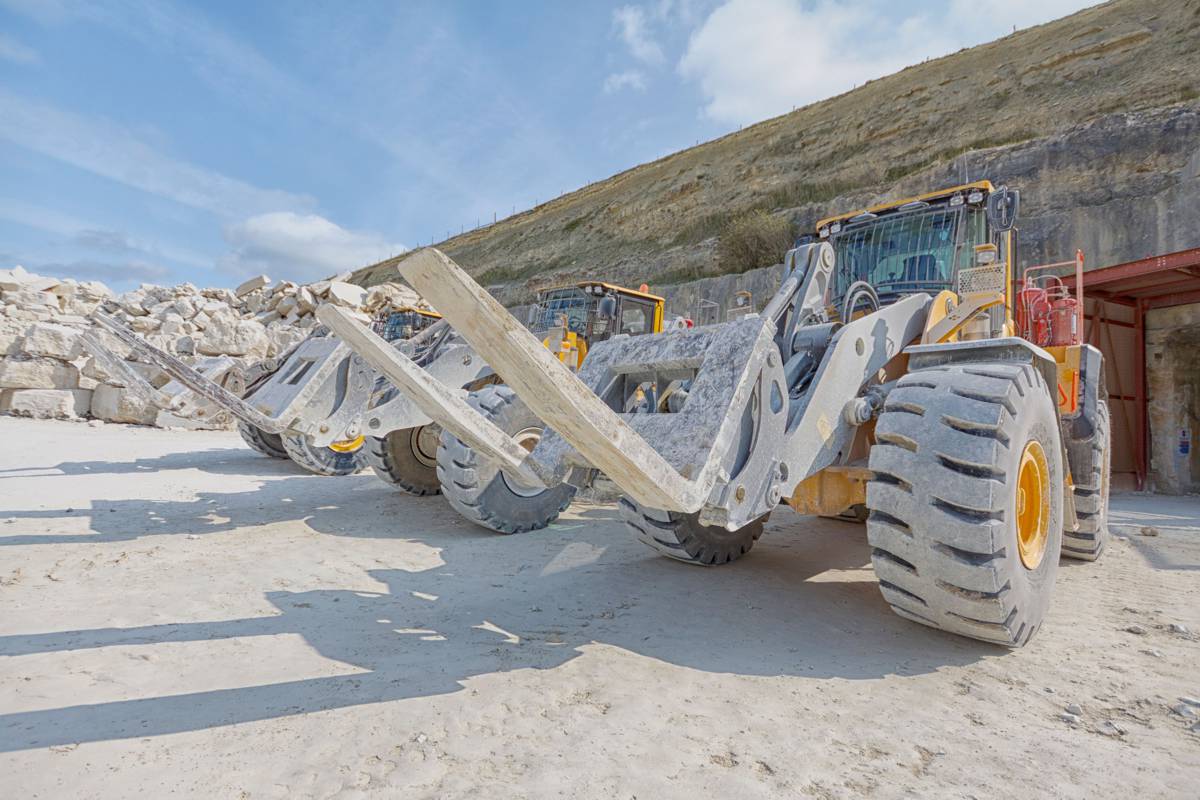 To counterbalance the weight of the blocks, the machine has been fitted with Goodyear RL 5K wheel and tyre assemblies, with the rear pair being water and glycol ballasted and an optional block handling counterweight. 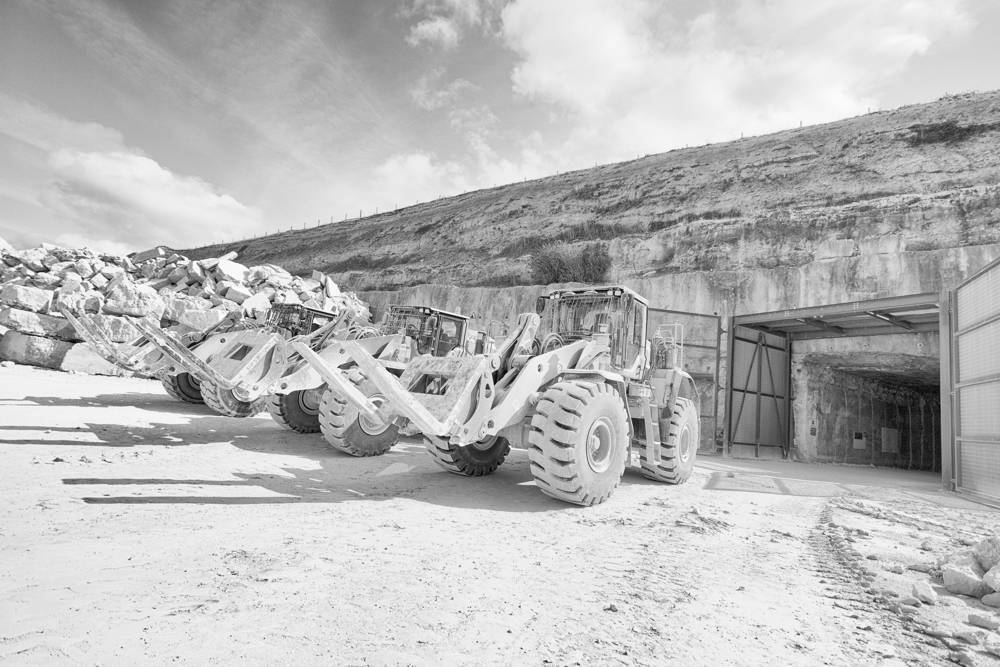 Powered by a 13 litre Stage V engine developing 304 hp, the 26 tonne L150H benefits from powertrain components designed by Volvo. This combination coupled to other fuel saving devices, such as the Volvo ‘Eco pedal’, encourages the operator to run the machine at its optimum rpm in the engine’s torque curve. ‘Optishift’ with torque converter lock up also makes the L150H a highly efficient and productive loading shovel for its size class.

Albion Stone PLC has been involved with the Portland stone industry for nearly three quarters of a century, quarrying the Oolitic Limestone that is reputed to be 145 million years old from the Basebed, Whitbed and Roach seams for over thirty years. 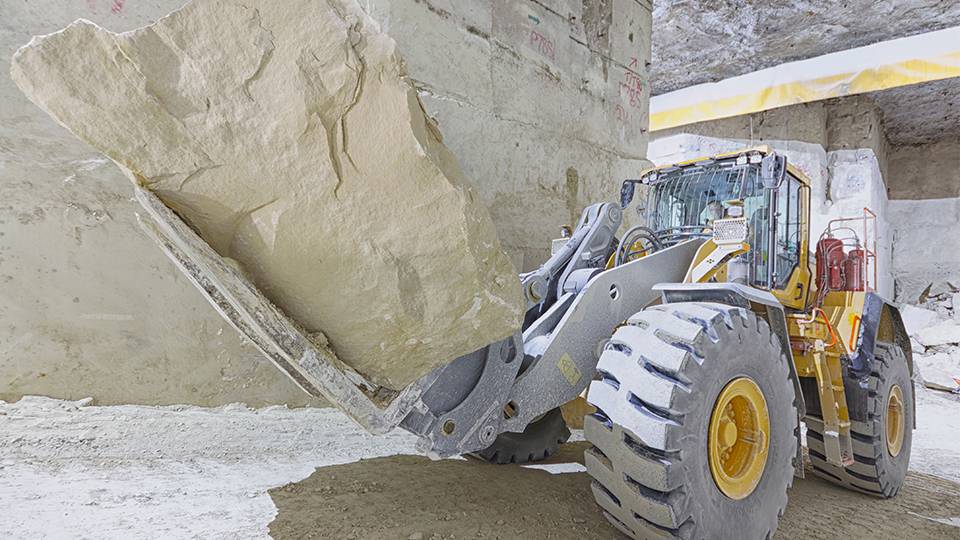 In recent years, the company has switched its extraction operations from quarrying to mining. This process has made a significant reduction on its environmental impact, making Portland stone an economical yet sustainable choice that compares favourably with many alternative construction materials. The extracted material is highly desired for prestigious buildings, and features in many famous edifices – for example in London where recent projects include the new Chelsea Barracks, Green Park Underground Station, the Bulgari Hotel and Eagle Place, Piccadilly.