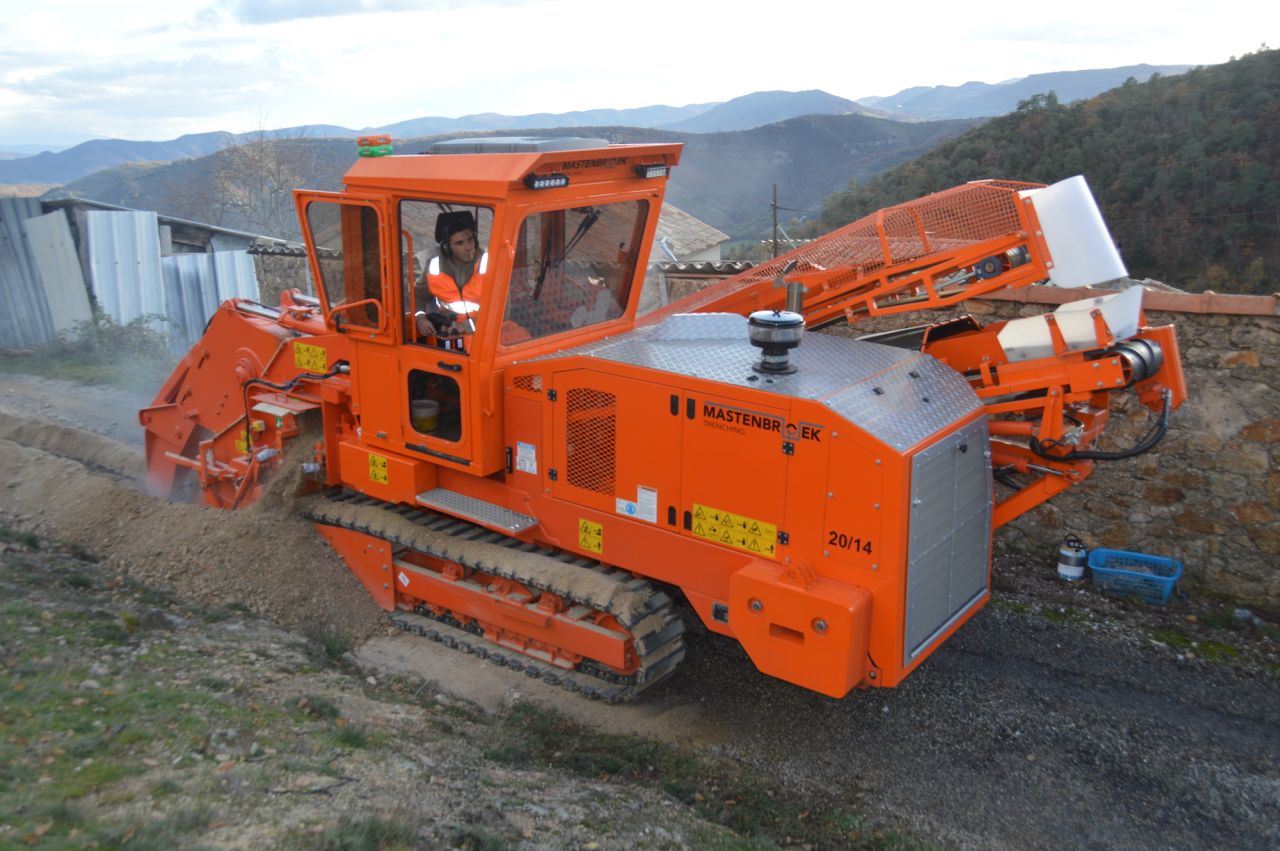 Mastenbroek, the UK-based designer and manufacturer of self-propelled trenchers has launched the latest edition of its super compact rock trencher – the 20/14.

The new version of the 20/14, which offers 215 horsepower and an off-setting digging mechanism to trench 1.4m deep, features several upgrades compared to the previous model.

One of the most innovative refinements has been to reduce the machine width to 2.5 meters and with the ability to remove the forward discharge conveyors to enable a working width of 2.1 meters, making it ideal for use on continental Europe where narrow village streets are common.

Mastenbroek has given the 20/14 trencher the same ergonomically designed cabin as its larger 17/17 model. This means the 20/14 boasts a redesigned cabin, with air conditioning and heating alongside an air suspension high comfort seat onto which are mounted the proportional controls for both the digging mechanism and the tracks.

A Deutz Construction TCD 6.1 L6 engine powers the machine and meets the latest EU Stage 5 emissions levels. Fuel consumption is maximised by the inclusion of intelligent load sensing, which controls the speed of the tracks based on how hard the machine is working, optimising performance.

“We are very pleased with how we have managed to include so many innovative and useful features into a small but incredibly powerful trencher,” says Christopher Pett, general manager at Mastenbroek. “Unlike other machines with a similar footprint, the operator sits in a weatherproof cabin and has the reassurance that the machine is ROP’s certified. They also have excellent visibility from the full width cabin of the digging mechanism and for track steering and conveyor discharge.”

The first 2021 model of the 20/14 has been sold to Colas, the global transport infrastructure construction and maintenance company. Operating in the Rhône-Alpes region of France, initial projects include trenching pipework to remote villages, which until now have relied on borehole for their water supply.

The deal was brokered by Paul Goncalves at Mastenbroek’s French dealer, Socodima. “Colas was looking for a powerful compact trencher with an ergonomic operator cabin and when we introduced them to the latest version of the Mastenbroek 20/14 they didn’t hesitate to place an order,” says Paul. “I think this will be the first of many as there is a lot of demand for a small, easy to transport and powerful trencher that is easy and comfortable to use no matter what the conditions.”

Mastenbroek manufactured its first trencher in 1977, since then the company has grown into a globally respected name in trenching, machine automation through its partnership with Trimble®, subsea cutting technology, ground stabilisation and groundwater control.