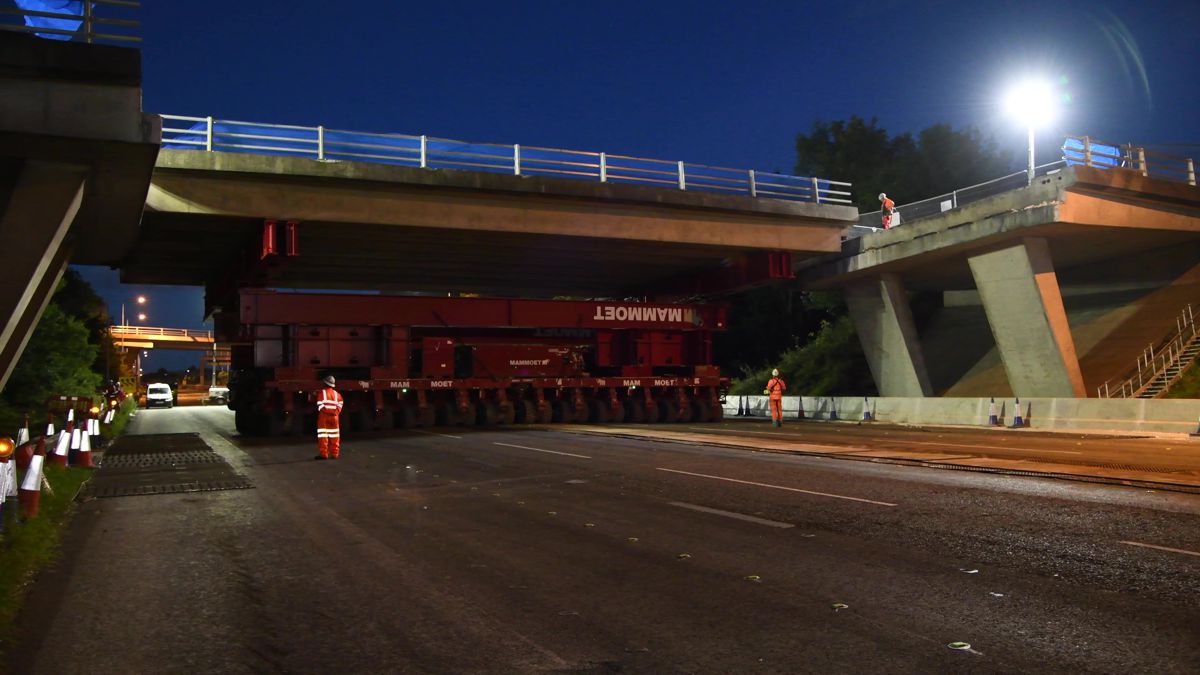 Eight huge steel beams will be lifted into place over the M53 in Merseyside this weekend to help create a new bridge over the motorway.

Highways England is installing the bridge to carry the southbound entry slip road onto the motorway at junction 2 near Moreton in the Wirral. The beams, which are 24 metres long and weigh approximately 11 tonnes each, will be lowered down using a crane.

They will be swung into position on Friday and Saturday night, with work then taking place overnight next week to lay 182 glass-reinforced plastic panels between the beams to form the base of the new bridge deck.

A temporary platform will also be installed around the beams so that drivers can continue to use the motorway as normal while contractors are working on the bridge over the next few months.

The original 50-year-old bridge was demolished last year due to its ageing condition, which would have required an HGV weight restriction to be introduced in the future.

Vikas Baloch, assistant project manager at Highways England, said: “We’ve been working hard since the summer to get the site prepared for the new bridge, and we’re now ready to lift the eight steel beams into place this weekend which will form the new bridge deck.

“Drivers travelling along the motorway over the next few months will see the bridge gradually take shape and our new temporary structure will allow us to work safely, minimising the need for overnight closures of the motorway.

“The new bridge will be suitable for all types of vehicles and we expect it to be used by hundreds of thousands of drivers over many years to come.”

Work has been taking place since the summer to strengthen the concrete bridge supports at either side of the motorway, and install new concrete barriers to reduce the risk of the new bridge being damaged in a collision.

More than 200 tonnes of concrete will be poured onto the bridge’s new deck in the spring, with work then taking place to fit safety barriers, install street lights and surface the road. The new bridge is due to open to drivers in the summer.

The southbound carriageway will be closed overnight between junctions 2 and 3 while work takes place to install the steel beams and panels. A diversion will take drivers along Upton bypass, the A551 Arrowe Park Road and the A552 Woodchurch Road.

Drivers heading northbound will also need to leave and then re-join the motorway at junction 2 to avoid travelling under the bridge.

The motorway closures will be in place from 8pm until 7am on Friday 8 and Saturday 9 January, and from 8pm until 5am for five nights from Monday 11 January as well as on Monday 18 January.

Temporary narrow lanes and a 50mph speed limit will remain on the M53 past the bridge throughout the project for the safety of drivers and workers.

Part of the M6 in Cheshire will also be closed for two weekends later this month for construction work on a new bridge to improve the flow of traffic between the M6 and A556 at junction 19.

The two weekend closures will start at 9pm on Friday 16 and Friday 23 January with the motorway re-opening by 6am on Monday morning. The M6 will be closed in both directions between junctions 18 and 20 on Friday and Sunday nights, as well as between the exit and entry slip roads at junction 19 at other times during both weekends.

More details on both schemes are available here.