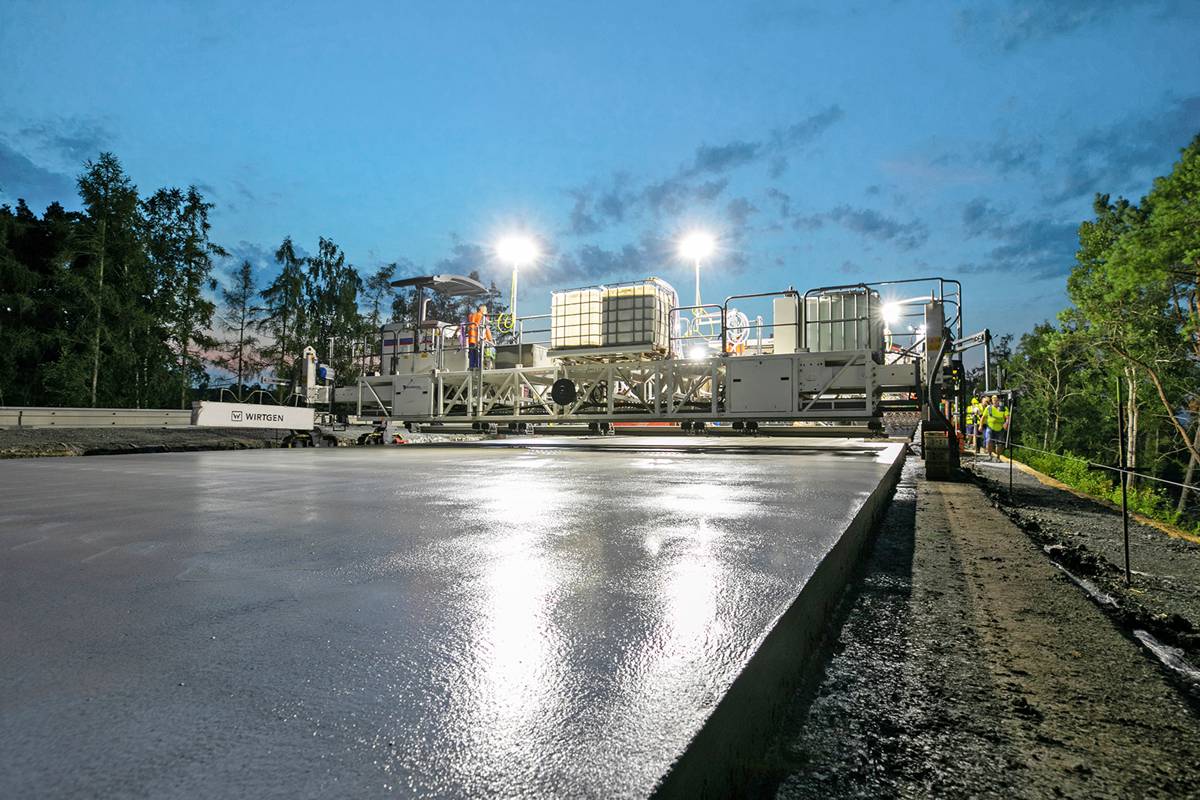 During the modernization of the D1 freeway between the Czech Republic’s two largest cities, two slipform pavers and a texture curing machine from Wirtgen rehabilitated a 67 km stretch of freeway in the direction of Prague.

During the process, the paving train paved two layers in one pass and widened the two lanes at the same time.

For this construction project, which significantly improves the flow of traffic and increases the safety of the Czech infrastructure, more than 60,000 tons of concrete were used over a period of 20 days. This is equivalent to 333 tons per hour. On the D1 freeway, contractor Eurovia CS used the new paving train from Wirtgen to pave the road surfaces with exposed aggregate concrete in optimal quality. With two SP 154(i) slipform pavers as bottom layer and top layer concrete pavers and a TCM 180(i) texture curing machine, Wirtgen was once again able to demonstrate its expertise and performance potential in terms of quality, speed, and cost-effectiveness.

The SP 154(i) is equipped with four steerable and slewing crawler units. This allows the machine to be controlled with maximum flexibility in different job site conditions. In addition, the steerable and slewing crawler units make the pavers easy to load. The pavers’ state-of-the-art ECO mode reduces fuel consumption and CO² emissions with only average power requirements.

The SP 154(i) features the same control panel design as the other models in Wirtgen’s current fleet of slipform pavers – meaning operators do not have to learn anything new. This guarantees continuous and precise paving without any delays due to training.

The two-layer paving method, which has been a preferred choice not just for the Czech project, is so cost-effective because only the top layer consists of relatively expensive exposed aggregate concrete. In contrast, a less expensive mix can be used for the road bed. Paving the top concrete layer “wet on wet” produced an excellent bond between the layers on the 11.5 m wide and 27 cm high road surfaces in the direction of Prague. Together, the 22 cm thick bottom layer concrete and the 5 cm thick top layer concrete produce a road surface with an extremely high bearing capacity that is also capable of withstanding the constantly increasing axle weights of trucks transporting heavy loads. As a result, the use of the SP 154(i) also improves safety and makes roads more durable over the long term.

When used as a top layer paver, an oscillating beam and super smoother work together to create an ideal concrete surface. Texture curing machines like the TCM 180(i) bring up the rear of the paving train. They can create different surface structures and spray a dispersion on the fresh concrete surfacing to prevent it from drying out prematurely. When paving with exposed aggregate concrete, on the other hand, a surface texture is not created, but instead the distinctive exposed aggregate concrete surface, with a texture depth of approx. 1 mm, is produced by brushing off the top layer of slurry.

0 0 0
Previous : Point of Rental and Vertex partner to simplify end-to-end tax management
Next : IRENA and IDB accelerate sustainable energy for Latin America and the Caribbean