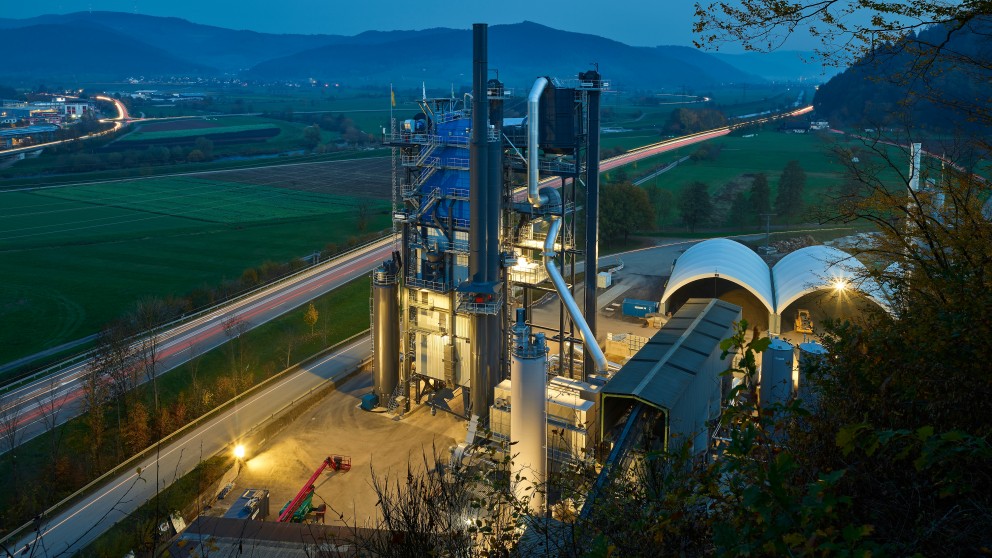 Producing asphalt in the right quality and quantity at the right time is in itself a challenge that requires perfectly aligned plant engineering.

If high recycling rates need to be achieved while still keeping emissions low, hot-gas generator technology from BENNINGHOVEN is virtually indispensable. This enables operators to turn reclaimed asphalt fully into new asphaltic mixture while complying with Germany’s new TA-Luft standard. This was adapted in line with the latest technological developments and approved by the German Federal Cabinet on December 16, 2020 following a consultation process lasting several years.

The hot-gas generator technology means that fresh asphaltic mixture can be made up of 90 + X% re-used asphalt – more than with any other recycling system on the market. BENNINGHOVEN can also integrate the hot feed system into existing asphalt mixing plants as a retrofit solution. However, an example from southern Germany shows in impressive fashion why investing in an entirely new asphalt mixing plant can pay off.

Investing in new technology rather than opting for a retrofit

From the topmost platform 43 meters off the ground, the Kinzigtal valley in the Black Forest looks truly resplendent. The new BA RPP 4000 is a total of 55 meters tall and makes a majestic impression, even when viewed from the ground.

The new asphalt mixing plant owned by Knäble GmbH Straßenbau, a medium-sized company from Biberach (Baden), is remarkable in many respects. One of the things that makes it unique is the fact that the BA RPP 4000 is replacing a BENNINGHOVEN TBA 3000 plant, which replaced the asphaltic mixture for Knäble’s two asphalt crews reliably for ten years. This is not a long time for an asphalt mixing plant, as most BENNINGHOVEN plants have a service life of 30 to 40 years.

So why did the road construction company with its rich tradition invest in new technology rather than in a retrofit solution, for instance? “As it happens, our planning did start with a retrofit. Ultimately, it was mainly the market environment and our requirements in terms of the technology and its capacity that swayed us toward a brand-new plant,” explains Managing Director Nicolas Knäble, a member of the fourth generation of the founding family.

Another benefit of this approach was that the company did not lose a single day of production. The “old” TBA 3000 kept on making the necessary asphaltic mixture until the BENNINGHOVEN technicians gave the green light to switch over to the BA RPP 4000 after installing and checking it.

From a strategic perspective, the investment is hugely important to the medium-sized road construction company as BENNINGHOVEN’s hot-gas generator – the leading recycling technology on the market – can convert 90 + X% reclaimed asphalt into new asphaltic mixture. This ability is significant, because the federal state of Baden-Württemberg, where Knäble operates, is committed to maximum recycling. This means that as much reclaimed asphalt aspermitted by law is added in when making new asphaltic mixture.

“Re-using materials saves energy and makes a major contribution to climate action,” says the state’s Minister of Transport Winfried Hermann. The stipulation already led to Baden-Württemberg recycling 2.5 million metric tons of asphalt in 2018, 23% of the volume re-used in Germany and well above average.

The revised German Technical Instructions on Air Quality Control (TA-Luft) have also now been signed off. These strict limits can fully be held by combining recycling drum technology using the counter flow principle with a hot-gas generator, something that BENNINGHOVEN is the only provider on the market to guarantee. This makes BA RPP plants tailor-made for Knäble’s requirements. “RPP” stands for “Recycling Priority Plant,” i.e. a plant that prioritizes the material flow for the recycling process and predominantly makes asphalt with higher RAP content.

In order to integrate the sustainable recycling technology throughout, Knäble wanted a higher mixing capacity of 320 metric tons per hour instead of the previous level of 240 as well as a more user-friendly technology. At the end the decision was made for a new BA RPP 4000. The plant also includes two EVO JET 3 burners, one each for the virgin mineral dryer drum and recycling drum. Besides oil and coal dust, these burners can also burn natural gas very efficiently. In the future, this will allow Knäble to respond flexibly to price fluctuations on the energy market and always use the cheapest fuel.

All in all, Knäble is making a genuine investment in the future with its new asphalt mixing plant. The family-owned company from the central Black Forest region enjoys a rich tradition and employs around 150 staff. Two own asphalt crews mostly produce asphaltic mixtures on local road construction sites using VÖGELE feeders and finishers and HAMM rollers. A KLEEMANN screening plant and WIRTGEN milling machines also form part of the machinery fleet.

Achieving high recycling rates and low emissions at the same time is only possible by using the counter flow principle combined with a hot-gas generator. Why? Since the old asphalt is heated up, the virgin mineral that is added does not need to be overheated when it is put into the mixing process in order to reach the necessary temperature, which is between 140°C and 180°C for warm mix asphalt. The method thus saves a lot of energy as well as emissions.

It is the use of the BENNINGHOVEN hot-gas generator that makes the process possible: Whilst direct firing would “burn” the RAP with its bitumen content, the hot-gas generator only heats it indirectly, bringing it gently to its ideal application temperature. The technique also pushes emissions down below the limit stipulated by the TA-Luft, not least because most of the hydrocarbons contained in the exhaust gas stream are burned off at the same time.

Continuous emisssion measurements onKnäble’s plants prove, that limit values can constantly be held. “Compared with running the old plant, our average recycling rate has increased from 25% to 60%,” reports a proud Myriam Knäble, wife of the Managing Director. “And, with the hot-gas generator, we’re saving 770 metric tons of CO2 a year.”

This is a huge benefit, particularly in light of the introduction of CO2 certificates in Germany – since the start of the year, companies that bring fuels onto the market have been required to buy emission allowances, better known as CO2 certificates. Initially, they will be charged EUR 25 per metric ton of CO2 released through burning heating oil, natural gas, gasoline, and diesel. Emission certificate prices will be set by the federal government during the introductory phase, which lasts until 2025.

The price per metric tonne of CO2 will be EUR 25 in 2021 and increase in stages to EUR 55 by 2025. In 2026, certificates are to be auctioned in a price range of EUR 55-65 for the first time, after which they are expected to be traded freely on the market. Putting a price on CO2 is part of the German government’s Climate Action Programme 2030. Since energy providers pass the costs incurred onto their customers, companies that are energy-efficient and thus have low-emission, environmentally friendly operations will stand to benefit even more in future.

The BENNINGHOVEN hot-gas generator is a sophisticated solution that is enjoying increasing popularity in many parts of Europe. At Knäble, too, the technology delivers what BENNINGHOVEN promises – a recycling rate of 90 + X%. “We’ve already hit 96% when making asphaltic mixture for the base,” says Nicolas Knäble, Managing Director of Knäble GmbH. “The quality we achieved when rehabilitating the B 33 federal highway where it passes through Hasslach is spot on.

The days of working reclaimed asphalt being a challenge are long gone. Instead, we now need to make sure that we’ve got enough material on stock for our orders that require a specific RAP rate. This is why we’re focusing specifically on bidding for tenders that will get us some reclaimed asphalt, so we don’t run out of the ‘black gold.’”

Although there are now many asphalt mixing plants capable of producing asphalt containing RAP, the current requirements in the road construction industry are becoming increasingly demanding. For instance, customers are keen on their asphalt to have specific properties, such as their colour, elasticity, or stability. Additives are used to achieve these properties, and Knäble has integrated three separate, fully automated systems for their composition.

All three are automated, making them extremely easy to use. Knäble has a double dosing unit for powder and granulate, a separate feed system for bulk materials such as Trinidad asphalt or rubber granulate, and a multi-variable RAP feed system that can feed up to 40% reclaimed asphalt into the process cold – or, alternatively, non-adhesive bulk materials. This gives Knäble a lot of flexibility.

“These options take our efficiency and productivity to the next level,” Nicolas Knäble says. “With our old plant, two men had to feed several 15-kilogram sacks into the mixer for each batch.” The mixer on the new TBA 3000 plant can produce 3 metric tons of asphaltic mixture every 45 seconds. “For recipes containing Trinidad asphalt or rubber granulate, i.e. that could only be managed with a bag feed unit in the past , we couldn’t even get close to the maximum possible mixing capacity of 240 metric tons per hour as these special recipes needed a batch time of at least 60 seconds, e.g. due to longer swelling times. The high degree of automation and the four-metric-ton mixer mean that we’re now reaching up to 320 metric tons an hour and are achieving a high mixing capacity even with special recipes with longer batch times.”

Besides the inherently user-friendly plant design, Knäble GmbH Straßenbau has also put other aspects in place to ensure first-class working conditions for the plant operator and the entire team. For instance, an elevator takes both personnel and materials up to the top level, allowing all checks and maintenance tasks to be performed in comfort.

Knäble staff can also look forward to a particular highlight down on the ground: The asphalt mixing plant’s command center, at the heart of which is a BLS 3000 BENNINGHOVEN control system, is housed in a separate building that is kept at a pleasant temperature throughout the year .

From here, staff can keep an eye on all relevant areas of the plant via a CCTV system without having to leave their workstations. “If you look at what’s been created here, it’s almost a shame that I’ll be able to retire soon,” says a regretful Reinold Helmut, the plant operator.

0 0 0
Previous : The new CAT 953 Track Loader does it all
Next : Hyundai deploys Workspot Enterprise Desktop Cloud for a secure supply chain