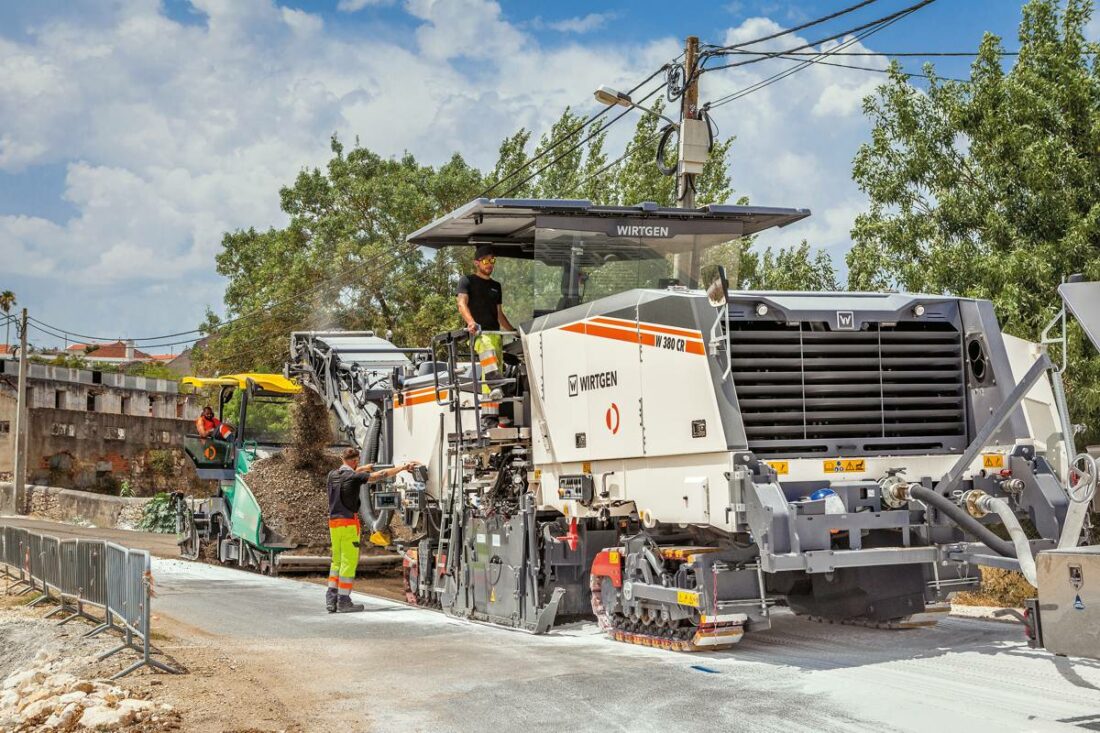 Trunk road ER 361 through the town of Monsanto, about 100 km north of Lisbon, required 2.7 km of structural rehabilitation in both directions.

The authority awarding the contract, Infrastructuras de Portugal, had planned some 12 weeks for the repair. Road construction experts from Pragosa used the cold recycling process to complete the job in just 4 days.

The heart of the cold recycling train is the new Wirtgen W 380 CR, which made its debut for Pragosa on this construction site. It is capable of recycling the old layers of the road in just one pass. A Vögele paver was responsible for paving true to line and level, and several Hamm road rollers carried out the final compaction.

Time is another factor in the success of cold in-place recycling, as this application is called. Shortening the duration of the project from 12 weeks to 4 days was only possible because almost no material had to be transported. The actual construction site planning had envisaged that both lanes would be excavated to a depth of 54 centimetre and rehabilitated from scratch.

This would have resulted in 7,500 m³ of material that would have had to be transported away from the construction site and replaced with new material. Replacing the material, including all the associated work, resulted in the planned construction duration of 12 weeks.

The new bitumen-stabilized material (BSM) serves as the new ‘backbone’ of the busy road and is immediately fit for traffic again after completion of a construction section.

Flexibility thanks to adjustable working widths

The University of Minho was responsible for designing the mix for the new BSM layer and collecting samples of the existing road structure. In the process, they determined that the roadbed still had enough bearing capacity that a BSM layer plus a new asphalt surface layer represented a long-lasting alternative to the conventional, cost-intensive process of building a new road.

To produce the new BSM layer, 7 kg of lime per square meter needed to be added to the mix. The lime was applied directly to the old road surface before the mixing process. With its extremely precise spreading unit, a Streumaster SW 5 RC mounted to a John Deere tractor ensured that the lime was evenly distributed. By carefully discharging the material at the right spreading width, the crew achieved a high degree of spreading accuracy, which kept costs as low as possible.

The W 380 CR then milled 16 centimetres deep through the damaged asphalt surface layer into the binder course. “The working depth of the cold recycler was set to 16 centimetres in order to produce a BSM layer with sufficient bearing capacity,” says Mike Marshall, Wirtgen recycling expert. After adding only 2.6% foamed bitumen and water, the lime was mixed in directly. Using the down-cut method, the new homogeneous road bed was mixed from the existing material consisting of the surface course and parts of the binding agent with the aggregates.

The enormous engine power of the CR paired with the highly efficient and powerful foamed bitumen spray bar allowed the machine to advance at 5 metres per minute. In the process, the CR produced around 320 tons of high-quality BSM mix per hour. “Foamed bitumen was selected as the binding agent. This offers numerous benefits in terms of processing capabilities and cost-effectiveness. In addition, cold processing significantly reduces carbon emissions,” explains Marshall.

The flexibly adjustable conveyor of the W 380 CR transported the 320 tons of BSM into the hopper of the Vögele SUPER 1900-3i following behind it. At its maximum capacity of up to 900 tons per hour, the paver was able to work in a particularly fuel-efficient manner in ECO mode here.

The paver was followed by three Hamm road rollers to complete the construction project. An HD+ 110i tandem roller with a smooth drum was used to first seal and stabilise the perfectly paved layer. Two GRW 18 pneumatic tyre rollers were then used for final compaction.

The environmental benefits of cold recycling are abundantly clear. According to Pragosa, it saved around 98% of the carbon emissions compared to the conventional construction method. This was primarily due to the fact that the construction material was reused on site, which otherwise would have had to be transported to and from this construction site by truck – in around 1,500 separate trips.

In addition, there were no landfill costs for disposal and mining costs for the new material. In other words, using this method also conserved.