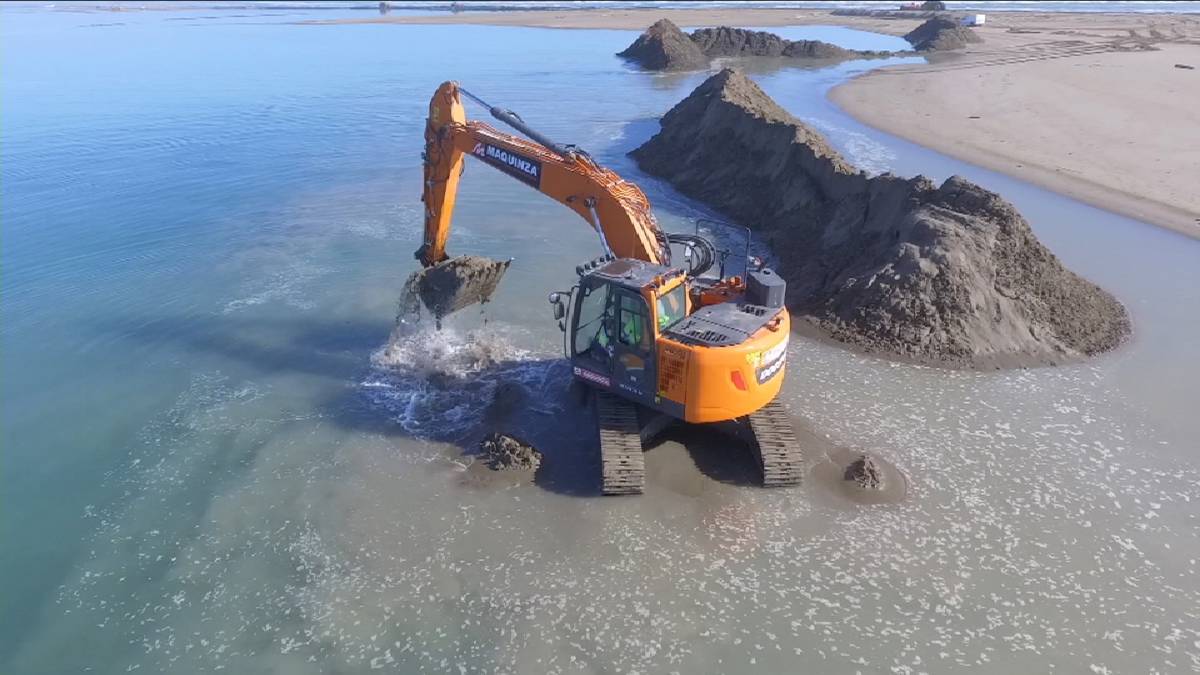 The impact of Storm Gloria from 17-25 January 2020 has left visible damage still to the Trabucador Bar on the coast of the Tarragona province in Catalonia in north-eastern Spain.

The storm’s 200 l/m2 rainfall and winds of 95 km/h combined to cause havoc throughout the area, including the Trabucador Bar, a six kilometre isthmus that connects the Ebro Delta with the Punta de la Banya Peninsula. The damage to the Trabucador Bar resulted in the sea invading some 300 hectares of the surrounding rice fields and weakening the ecosystem of the area.

In fact, the Trabucador Bar suffered several breaks throughout 2020 due to inclement weather, but the structure has now been repaired using a Doosan DX235LCR-5 24 tonne reduced radius  excavator supplied by Maquinza, a machinery rental and sales company. Maquinza provides comprehensive solutions for the construction, public works, industry and agriculture sectors, among others, with the support of Centrocar, the exclusive importer for the Doosan range for Spain, Portugal, Angola and Mozambique.

The work on the Trabucador Bar has involved large movements of sand from other areas or from the seabed itself to protect an area of ​​2500 hectares by preventing sea water from entering crop plantations and other areas such as salt flats. In the first stage of the works, the causeway was strengthened to be able to access the Punta de la Banya and after that, the sand was replaced to complete the restoration of the Trabucador Bar, an intense contract carried out under extreme conditions. 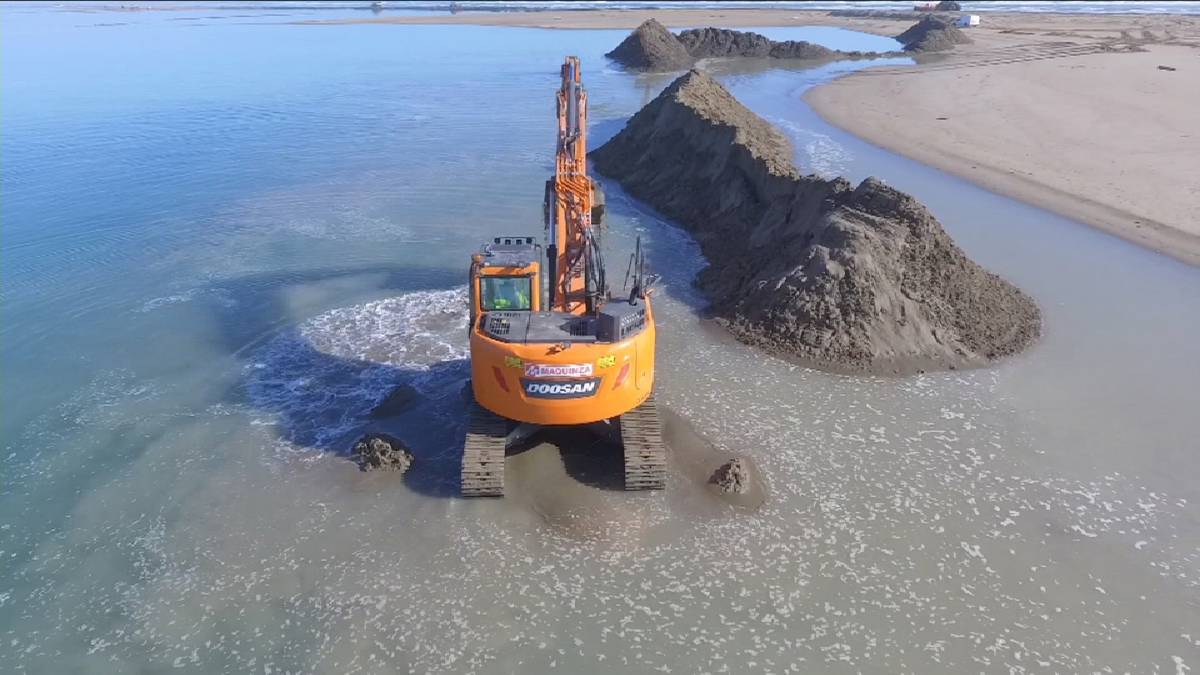 According to the contractor carrying out the works, to extract sand from the seabed to rebuild the natural barrier requires heavy machinery such as the Doosan DX235LCR-5 excavator, allowing the movement of thousands of m3 of sand to reform the sand barrier, in the shortest time possible. The Doosan DX235LCR-5 excavator is very effective for this type of task because it is a crawler machine, which provides greater traction and better manoeuvrability on the very difficult terrain, literally working in an area flooded by sea water. The superior traction also means a greater load capacity and a shorter execution time for the work.

The reduced radius 24 t DX235LCR-5 is the most powerful excavator in this range on the market, offering superior pulling force, swing force and digging force. Really agile with its low overhang swing, this excavator can move around 380 tonne of sand every hour. It is a very fast machine with very short cycle times. 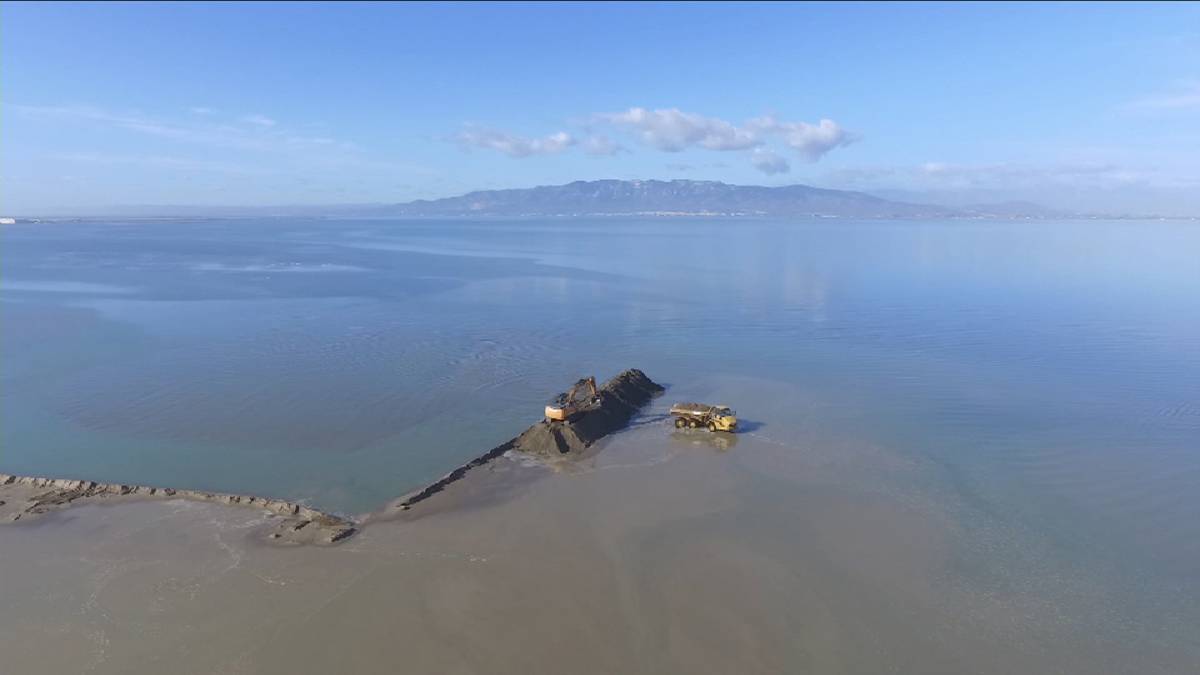 The undercarriage on the DX235LCR-5 can handle extreme applications like working in seawater thanks to forged steel rollers and grease-lubricated track chains, allowing for increased equipment longevity. In addition, the chain is made up of sealed and self-lubricating links for long life.

The Doosan DX235LCR-5 excavator offers high bucket and arm digging forces along with high productivity. It features reinforced castings, forged steel hinge points and a heavy-duty reinforced boom and arm to withstand the effects of working with high-impact materials. Other features include heavy-duty oversized boom and arm cylinders to ensure power and fluidity; advanced pin and bushing technology and two-piece boom and dozer blade configurations that are perfect for special applications.

Doosan excavators in general are recognized for their robustness and reliability, characteristics that are very necessary for jobs like this in the Ebro Delta. The DX235LCR-5 is particularly suitable for this application owing to its low noise levels for both the operator and the environment.

The Doosan DL06P engine in the DX235LCR-5 is exceptionally powerful and reliable, with high torque at low revs, increased fuel efficiency and no need for a diesel particulate filter (DPF) and the associated regeneration system. Thanks to the SPC (Smart Power Control) system, combined with programmable engine shutdown and automatic idle settings, the DX235LCR-5 offers additional fuel savings of up to 5%.