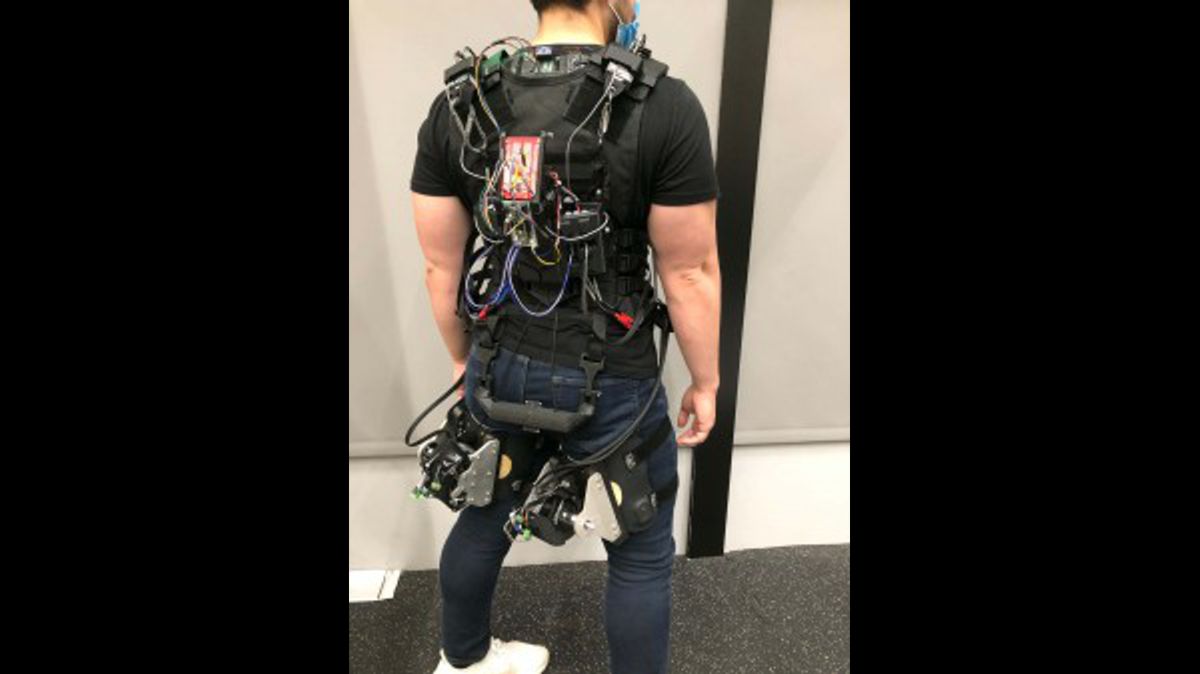 How to make an Exosuit

How to make an Exosuit

In the last few years, mechanically assistive exosuits, long depicted in works of popular science fiction and film, have finally started to see commercial deployment, according to Aaron Young, professor in the George W. Woodruff School of Mechanical Engineering at Georgia Tech. Most of these exosuits have a so-called passive design, assisting the wearer with unpowered elements like springs.

Active exosuits that incorporate electronics and powered motors are yet to be broadly applied. They tend to be big and heavy, and rely on rigid exoskeletons to transfer weight from body to ground. Exoskeletons add a great deal of stiffness, as well, Young said. Putting on most active exosuits is a little like becoming one with a forklift, restricting a wearer to lifting weights in a vertical plane.

For all these reasons, Young’s Asymmetric Back eXosuit (ABX) described in the October 5 issue of IEEE Transactions on Robotics is highly non-standard. There’s no exoskeleton, no rigid structure, nothing that makes contact with the floor. If the wearer is just standing there, it does nothing except for adding 14 pounds to their legs. But if they raise their body from a leaning over position, it makes a somewhat frantic noise: that is the sound of the ABX helping them rotate their torso, helping them twist.

Although most active exosuits support vertical lifts, rotating and twisting movements are also ubiquitous, especially in certain fields of manual labour like garbage collection and baggage handling. In many cases, these motions can be awkward and strenuous, leading to work-related injuries as well as back pain, according to Young. Back pain, in turn, is directly correlated with the strength of compressive forces and shear forces that are applied to the spine.

In designing their exosuit, the researchers sought a way to reduce these loads on the spinal joints. Putting it on looks a little like donning a futuristic backpack. Two motors are first strapped onto the back of each upper thigh. These motors are then connected to the back of the opposite shoulders, each with their own cable, making for two cables that diagonally overlap. The exosuit provides assistance by applying tension to the cables when it detects a wearer rise from a bending posture.

“It’s definitely a different sensation than a sort of standard exoskeleton. It’s not your standard design,” said Young.

Because the diagonal cables have a component of motion that is horizontal, they exert a pull on the torso that can aid in twisting it from side to side. In tests, the researchers showed that when a wearer of the ABX swung a weight from the ground to one side, the exosuit reduced their back muscle activations by an average of 16%, as measured by electromyography (EMG) sensors. The exosuit also provided a 37% reduction in back muscle exertion when a wearer lifted weights symmetrically, straight off the ground – an assistance level comparable to more rigid designs.

“People definitely felt like the technology is assisting them, which is great. And we did see the concurrent EMG reduction,” said Young. “I think it’s a great first step.”

In a sense, wearing the exosuit is almost like strapping two additional muscles onto the body – unconventional muscles, which run directly from back to leg. Interestingly, it is the positioning of these muscles rather than their brute strength that makes them functional, said Young.

The motors pull the cables with much less power than the muscles in the body. However, the cables are positioned much further away from the joints. Through this positioning, the cables obtain greater leverage and mechanical advantage, allowing the wearer to reduce their overall muscular output and hence the load that they place on their spine. (Spinal loading was not directly measured in the study.)

Aside from its overall performance, it is the flexible, asymmetric nature of the suit that really makes it unique, Young said. There are currently no other active exosuits that provide assistance for twisting and rotating through a comparable range of motion. While other exosuits also use cables, none have arranged them along diagonal lines.

Young is currently seeking collaborations with industry partners to further develop the exosuit. In future work, he sees its control system as a point to improve. Currently, when a person raises their torso from a lowered position, the cables simply pull with constant tension. But it should be possible to make the system detect different actions of the wearer and adjust its pull in response.

0 0 0
Previous : Twisting 2D materials may lead to improved electronic and optical devices
Next : Digitalization of agribusiness supported by EBRD and UN