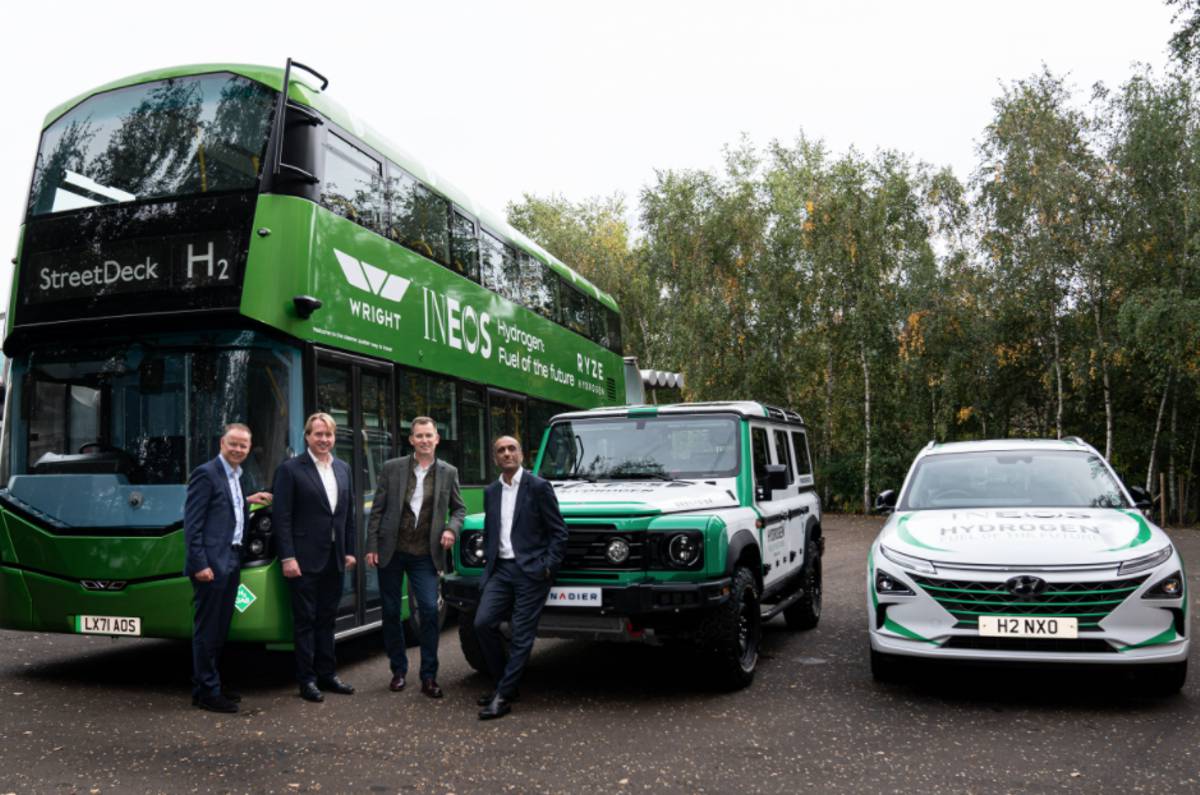 The first-ever double decker hydrogen bus tour of the UK is setting off from London on Monday 18 to shine a spotlight on the part hydrogen has to play in the country’s race to net zero.

The UK Hydrogen Roadshow, a partnership between bus manufacturer Wrightbus, hydrogen distribution firm Ryze Hydrogen, and hydrogen production company INEOS through its INOVYN subsidiary, will see the world’s first hydrogen double decker bus, the Wrightbus Hydroliner, travel a 600-mile route as it makes its way from London to Glasgow for the UN’s climate conference, COP26.

It will stop at various businesses along the way to highlight the potential that low-carbon hydrogen fuel has to play in various industries.

The roadshow will also mark the announcement of a significant partnership between Wrightbus, and INEOS, as the firms work together to create hydrogen solutions that will help decarbonise the transport industry and help the UK achieve its Net Zero goals.

Wrightbus and Ryze Executive Chairman, Jo Bamford – who bought the firm out of administration just two years ago and has turned it around – said: “Hydrogen technology has the potential to create and sustain hundreds of thousands of high-quality jobs in all parts of the UK, covering many different sectors.

“At Wrightbus, we’re really walking the walk. Not only have we pioneered zero emissions transport but we‘ve increased the workforce from 56 to more than 900 in just two years and have introduced four zero emission buses in the 12 months.

“Our hydrogen double decker is a world first, a tremendous accolade for our factory in Northern Ireland, and we’re delighted to be partnering with Ineos to undertake this mammoth UK tour as part of our journey up to COP.

“Our route will take in stops with partners who are at the forefront of hydrogen technology, including aviation, heavy plant machinery and heating. We’ll also be talking to companies working to create the important infrastructure needed to produce hydrogen at the levels we need to realise our ambitions for a strong UK-wide hydrogen economy.”

Ryze CEO, Buta Atwal, said: “We’ve long been excited about the potential benefits that hydrogen can bring, not only in helping the UK to achieve a huge CO2 reduction, but in terms of the green jobs and wider economic benefits that a strong hydrogen sector can bring.

“This tour will highlight the fantastic innovation happening up and down the country as we move towards a zero-carbon future.”

Sir Jim Ratcliffe Chairman and founder of INEOS said: “Hydrogen is the dream fuel.   You can heat your home with it.  You can drive your car on it.  Burn it and all it produces is energy and the only by product is water.   We can all live with that. The world has committed to hugely reducing its carbon emissions and hydrogen is unquestionably going to play a large part in accomplishing this goal.”

Geir Tuft, CEO INOVYN said: “Our expanding portfolio of clean hydrogen projects strengthens INOVYN’s sustainability strategy and supports the drive to net-zero across the UK and the rest of Europe.  INOVYN is in a unique position to reaffirm its expertise in hydrogen production and electrolysis, and to progress the green energy transition through the use of clean hydrogen.”

Wouter Bleukx, INOVYN Hydrogen Business Manager said: “Hydrogen is an important part of a climate neutral economy that has been discussed for decades. As hydrogen becomes available for zero carbon transportation as well as many applications in the home and in industry INEOS is uniquely placed to support new opportunities, driven by emerging demand for affordable zero-carbon energy sources.”

The collaboration between INEOS through its subsidiary INOVYN and Wrightbus presents both companies with new opportunities to expand the use of low carbon Hydrogen. INEOS through INOVYN is Europe’s largest operator of electrolysis, which produces low-carbon hydrogen, and Wrightbus makes the world’s first double decker hydrogen bus.  Coming together, both companies believe they can drive forward the everyday use of hydrogen in heavy use transport fleets across the UK.