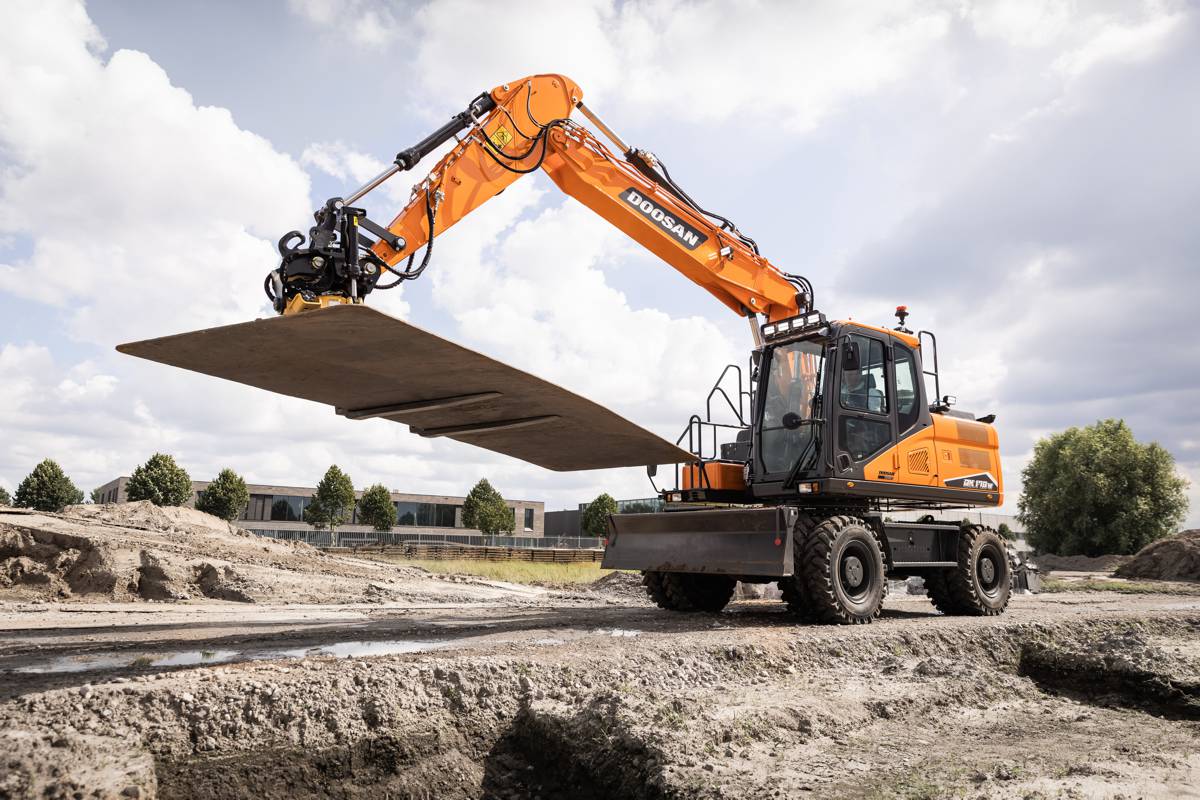 The new wheeled excavators also have a new smart hydraulic system that offers an improvement of around 30% in attachment work, compared to the previous models. The new system applies a smart hydraulic logic for optimal distribution of the hydraulic flow rate when both the arm and attachment are working simultaneously, with a new priority valve and an additional hydraulic line maintaining continuous hydraulic flow to the attachment, even when the arm is being used.

All three wheeled excavators have new upper structures providing the space and durability for the standard and optional heavier counterweights and articulated fronts. In addition, the excavators now offer a 2750 mm wide axle as an option, providing 8-9% increased lifting capacity over the side, compared to the standard axle. 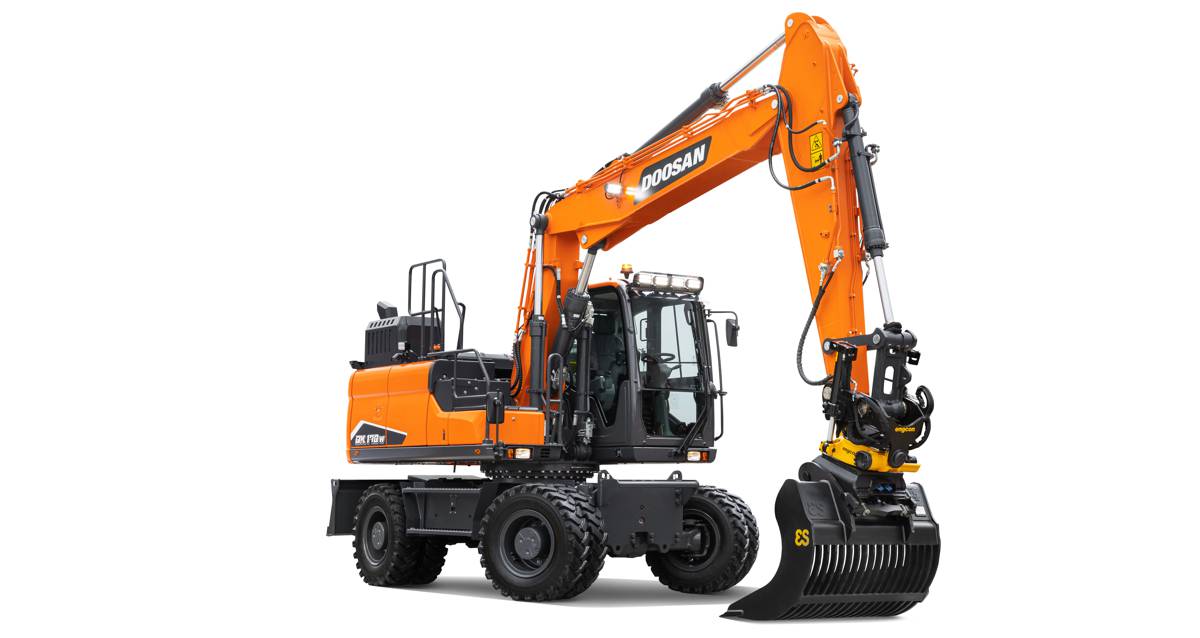 There is a new Tiltrotator Mode on the control panel in the DX170W-7, DX190W-7 and DX210W-7, which can be selected to ensure an optimized hydraulic flow and helps to maximize the accuracy of tiltrotator work by eliminating back pressure. This new tiltrotator mode is a special two-way flow mode, but it is managed by the EPOS like a one way flow mode, with direct return to the tank in each direction, to avoid back pressure and increase flow and controllability.

Another standard new feature is the Fine Swing function which minimizes the shaking that a lifted object undergoes at the start or stop of a swing movement with the excavators, to increase the safety of nearby workers and to prevent damage caused by the object falling from the excavator. When Fine Swing activates, the overrun disappears, allowing the wheeled excavators to smoothly reach maximum swing speed, whilst removing the shock from the turn reversal at the moment of stopping, resulting in a smooth stop.

The new excavators incorporate as standard a new lifting eye that forms part of the casting for the push link for the bucket attachment at the end of the arm. The new lifting eye has a maximum capacity of 5 tonne and has a special bush insert to prevent deformation of the lifting hole. 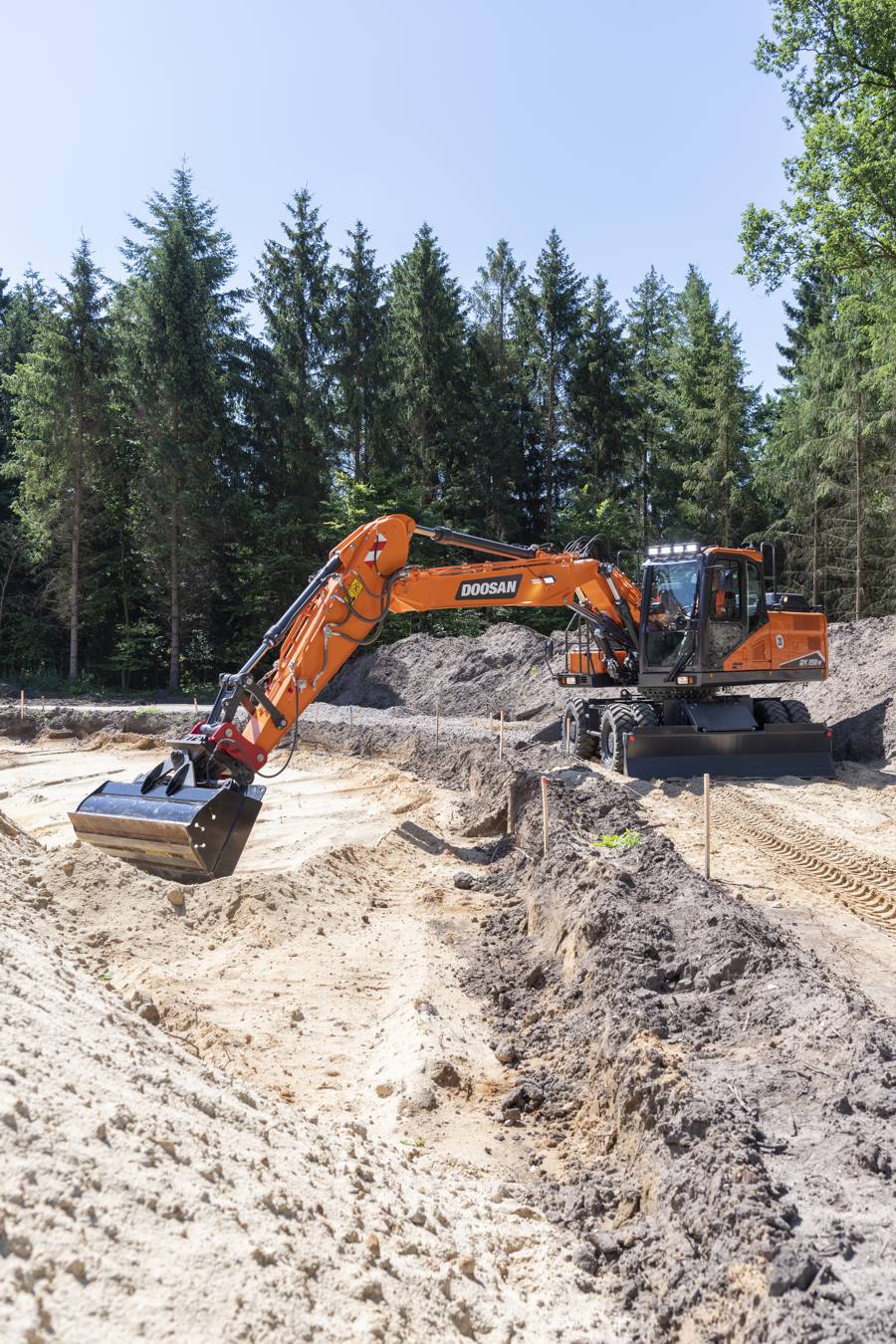 The state-of-the-art cab on the DX170W-7, DX190W-7 and DX210W-7 excels in terms of spaciousness and ergonomics, taking operator comfort and ease of operation to new levels. As well as a new high quality seat, the enhanced cab offers more features as standard than other machines on the market, ensuring super controllability and high precision in all applications.

The Load Isolation System (LIS) is another new option that enhances the operator’s driving comfort by mitigating the impact transmitted to the front of the machine, when driving off road on uneven and tough terrain. The Boom Suspension (LIS) function is also actuated by pressing a button on the control panel – it can be automatically activated when the driving speed is 5 km/h ± 0.5 km/h or higher, and the function is deactivated at 4 km/h ± 0.5 km/h. 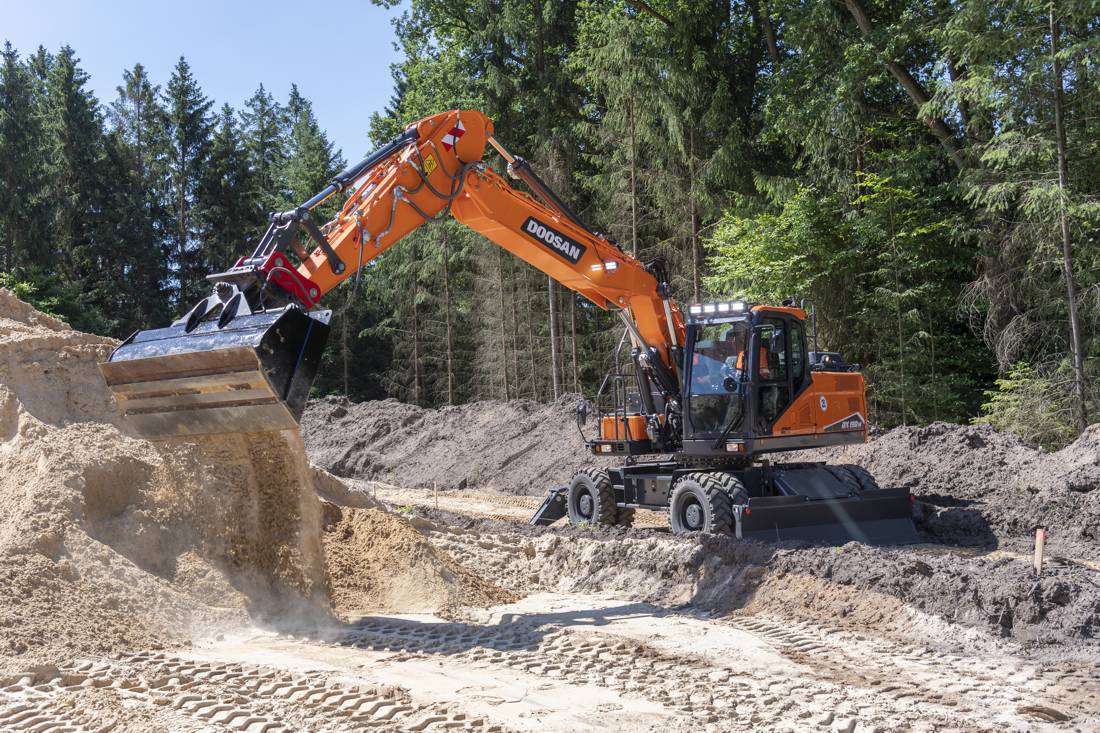 To meet Stage V engine emission regulations, the DX170W-7, DX190W-7 and DX210W-7 wheeled excavators are powered by the latest generation Doosan DL06V diesel engine, providing 111 kW (149 HP), 121 kW (162 HP) and 141 kW (189 HP) of power, respectively. The DL06V engine offers a new solution to exceed Stage V regulations without exhaust gas recirculation (EGR), that boosts the quantity of air available during combustion, increasing the temperature of the process and greatly reducing the amount of particulates produced. This is combined with super-efficient DOC/DPF+SCR after-treatment technology to ensure minimal emissions. Thanks to the new technology, maintenance of the diesel particulate filter (DPF) has been greatly reduced, with no maintenance required until the machine has operated for 8000 hours.

In the new wheeled excavators, the enhanced fuel efficiency of the DL06V engine in combination with a new hydraulic main valve and the new generation SPC3 Smart Power Controls, provides increased fuel saving compared to the previous generation machines. There are four power modes now available on the DX170W-7, DX190W-7 and DX210W-7, which help to simplify the operation of the new excavators compared to the more complex choice of eight power modes and SPC combinations in the previous generation machines. The operator is able to set the power mode (P+, P, S or E) in both one-way and two-way working modes.

When driving the wheeled excavators, the operator can select two-pump travel mode via a touch control on the main panel. This reduces revs by about 300 RPM when engaged, resulting in up to 10% less fuel consumption when travelling. The acceleration function has also been improved, so the operator feels a faster response when pressing down on the acceleration pedal. When two pump travel is disengaged, it provides higher torque for driving uphill, but generally as long as the slope is not too extreme, the use of two pump travel is recommended.

The new DX170W-7, DX190W-7 and DX210W-7 models are factory-installed as standard with Doosan’s state-of-the-art DoosanCONNECT wireless fleet monitoring system. The DoosanCONNECT system offers a web-based fleet management solution which is very useful for monitoring the performance and security of machines and promoting preventative maintenance. It is available as a standard feature on all new Doosan excavators (from 14 tonne), all new Doosan wheel loaders and Doosan ADTs. 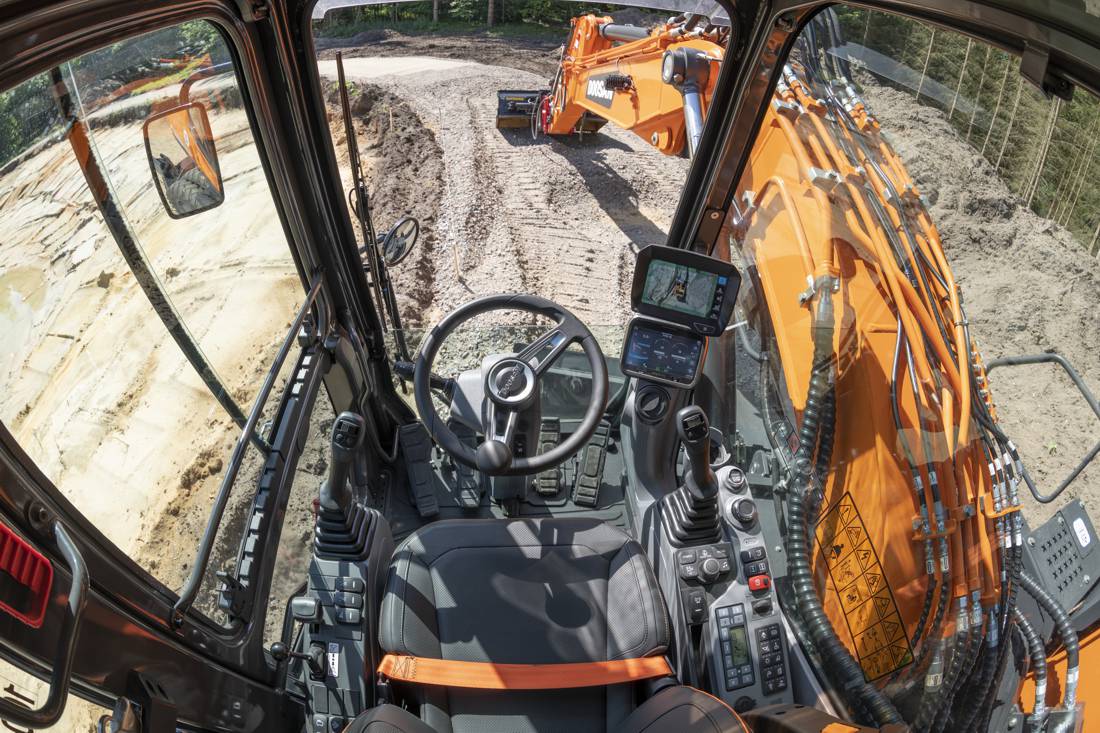