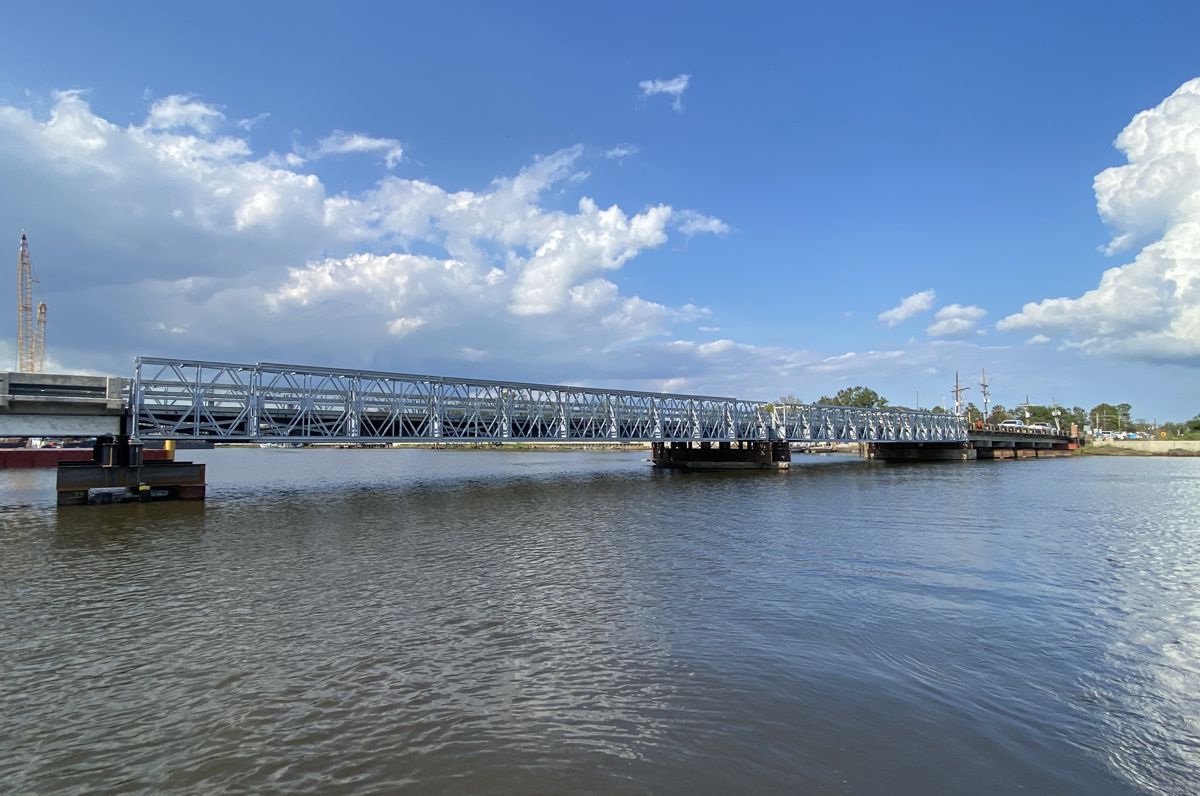 Acrow, a leading international bridge engineering and supply company, recently supplied a modular steel bridge to provide passage between the communities of Lafitte and Barataria in Jefferson Parish, Louisiana.

Acrow’s bridge is serving as a temporary replacement for the Kerner Swing Bridge, which was destroyed by a rogue barge during Hurricane Ida, a destructive Category 4 storm that made U.S. landfall in the state on August 29th of this year.

Widespread damage and loss of life from the storm was reported in many parts of Louisiana and states as far north as Connecticut. Southeastern portions of Louisiana were particularly hard hit by catastrophic rain and wind, including Jefferson Parish, where the 400 residents of Barataria became isolated by the destruction of their only vehicular bridge to the mainland, leaving them without access to emergency services.

Within days, the Louisiana National Guard installed a temporary floating bridge to enable access for first responders and residents, but the capacity of the single lane structure proved inadequate and a larger, longer-term temporary bridge was urgently needed. Ultimately, the contractor, C.E.C., Inc., selected a modular steel structure from Acrow, based in part on the firm’s extensive experience in restoring damaged infrastructure in emergency conditions globally.

Acrow’s modular steel bridge consists of two 100-foot-long spans, each with a roadway width of 24 feet. The existing damaged bridge was a movable swing bridge, providing a clear waterway for the passage of ships.  The driving surface for the movable bridge had partial curves fabricated into its deck to accommodate the swinging motion, requiring Acrow to quickly fabricate special curve filler decks to allow for a smooth transition. The spans were supplied with a factory-applied epoxy aggregate anti-skid deck. The center plate and cover plates transitioning from the approaches to the bridge had the same epoxy aggregate anti-skid deck applied at the site.

Acrow’s components were delivered to the site over a two-week period beginning September 20th. The bridge was opened to traffic on October 7th and will be in place until a new permanent swing bridge is constructed.

“We are grateful for the opportunity to assist in this project to restore a key transportation lifeline in the wake of Hurricane Ida,” added Bill Killeen, Acrow CEO. “Drawing on decades of service in recovery from disaster, our Rapid Response Team understands the challenge of restoring infrastructure quickly and can provide immediate response in the most difficult conditions.”