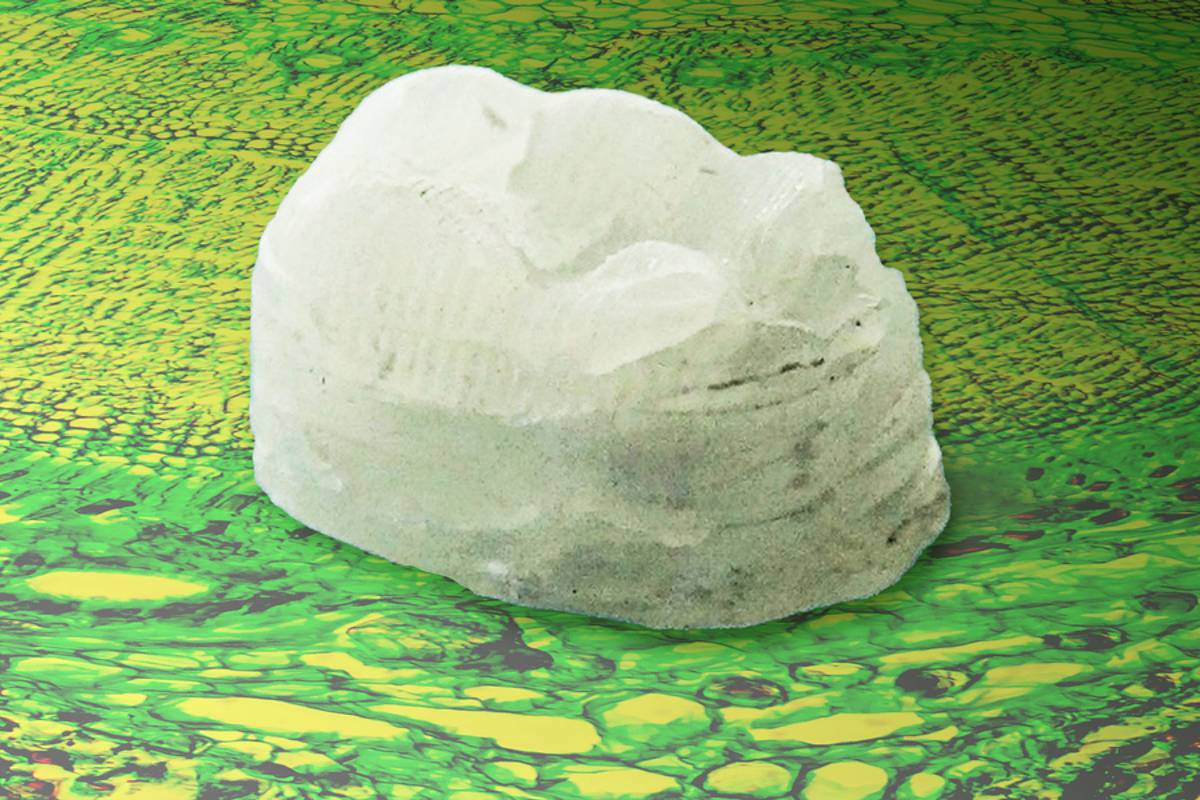 The strongest part of a tree lies not in its trunk or its sprawling roots, but in the walls of its microscopic cells.

A single wood cell wall is constructed from fibres of cellulose ­— nature’s most abundant polymer, and the main structural component of all plants and algae. Within each fibre are reinforcing cellulose nanocrystals, or CNCs, which are chains of organic polymers arranged in nearly perfect crystal patterns. At the nanoscale, CNCs are stronger and stiffer than Kevlar. If the crystals could be worked into materials in significant fractions, CNCs could be a route to stronger, more sustainable, naturally derived plastics.

Now, an MIT team has engineered a composite made mostly from cellulose nanocrystals mixed with a bit of synthetic polymer. The organic crystals take up about 60 to 90 percent of the material — the highest fraction of CNCs achieved in a composite to date.

The researchers found the cellulose-based composite is stronger and tougher than some types of bone, and harder than typical aluminium alloys. The material has a brick-and-mortar microstructure that resembles nacre, the hard inner shell lining of some molluscs.

The team hit on a recipe for the CNC-based composite that they could fabricate using both 3D printing and conventional casting. They printed and cast the composite into penny-sized pieces of film that they used to test the material’s strength and hardness. They also machined the composite into the shape of a tooth to show that the material might one day be used to make cellulose-based dental implants — and for that matter, any plastic products — that are stronger, tougher, and more sustainable.

“By creating composites with CNCs at high loading, we can give polymer-based materials mechanical properties they never had before,” says A. John Hart, professor of mechanical engineering. “If we can replace some petroleum-based plastic with naturally-derived cellulose, that’s arguably better for the planet as well.”

Hart and his team, including Abhinav Rao PhD ’18, Thibaut Divoux, and Crystal Owens SM ’17, have published their results today in the journal Cellulose.

Each year, more than 10 billion tons of cellulose is synthesized from the bark, wood, or leaves of plants. Most of this cellulose is used to manufacture paper and textiles, while a portion of it is processed into powder for use in food thickeners and cosmetics.

In recent years, scientists have explored uses for cellulose nanocrystals, which can be extracted from cellulose fibres via acid hydrolysis. The exceptionally strong crystals could be used as natural reinforcements in polymer-based materials. But researchers have only been able to incorporate low fractions of CNCs, as the crystals have tended to clump and only weakly bond with polymer molecules.

Hart and his colleagues looked to develop a composite with a high fraction of CNCs, that they could shape into strong, durable forms. They started by mixing a solution of synthetic polymer with commercially available CNC powder. The team determined the ratio of CNC and polymer that would turn the solution into a gel, with a consistency that could either be fed through the nozzle of a 3-D printer or poured into a mould to be cast. They used an ultrasonic probe to break up any clumps of cellulose in the gel, making it more likely for the dispersed cellulose to form strong bonds with polymer molecules.

They fed some of the gel through a 3-D printer and poured the rest into a mould to be cast. They then let the printed samples dry. In the process, the material shrank, leaving behind a solid composite composed mainly of cellulose nanocrystals.

Interestingly, when the team examined the composite’s structure under a microscope, they observed that grains of cellulose settled into a brick-and-mortar pattern, similar to the architecture of nacre. In nacre, this zig-zagging microstructure stops a crack from running straight through the material. The researchers found this to also be the case with their new cellulose composite.

They tested the material’s resistance to cracks, using tools to initiate first nano- and then micro-scale cracks. They found that, across multiple scales, the composite’s arrangement of cellulose grains prevented the cracks from splitting the material. This resistance to plastic deformation gives the composite a hardness and stiffness at the boundary between conventional plastics and metals.

Going forward, the team is looking for ways to minimize the shrinkage of gels as they dry. While shrinkage isn’t much of a problem when printing small objects, anything bigger could buckle or crack as the composite dries.

“If you could avoid shrinkage, you could keep scaling up, maybe to the meter scale,” Rao says. “Then, if we were to dream big, we could replace a significant fraction of plastics, with cellulose composites.”

This research was supported, in part, by the Proctor and Gamble Corporation, and by the National Defense Science and Engineering Graduate Fellowship.

0 0 0
Previous : Modern Architecture vs Traditional Architecture
Next : Billericay Operator Training Company back on track with a Hyundai HX140LC Excavator