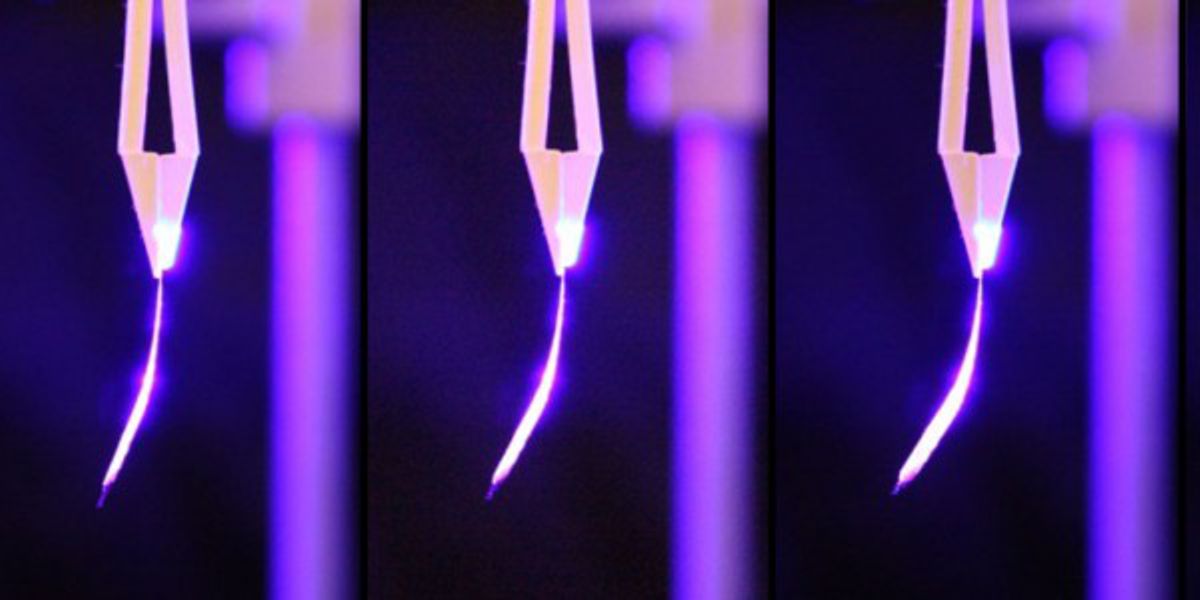 A team of Florida State University researchers has uncovered a way to use low-energy light to manipulate photopolymers or plastic films — a finding that has implications for a wide range of technologies that use light as an energy source to create shape-shifting structures.

The research is published in the journal ACS Applied Polymer Materials and is a joint work by Associate Professors of Chemistry and Biochemistry Ken Hanson and Justin Kennemur and FAMU-FSU College of Engineering Professor William Oates.

“The idea is we want to harness low-energy light and produce mechanical force as efficiently as possible,” Hanson said.

Researchers worldwide have been working on materials that respond to external stimuli such as light, temperature, magnetic fields or electricity. These stimuli can cause a material to change its shape, its molecular arrangement or its mechanical properties and have been utilized in research in robotics, aerospace engineering, drug delivery and more.

FSU’s research team has been particularly interested in light-responsive systems for mechanical work, a lesser-studied area.

Thus far, research in that area had shown that the conversion of light for this purpose is often energetically inefficient and requires a high-energy light for significant results. Hanson, Kennemur and Oates felt that their combined expertise — Hanson is an expert on solar cells, Kennemur in polymer synthesis and Oates in the characterization and modeling of materials — might help them develop a novel approach.

Their research team ultimately collaborated on a new process that effectively harvests low-energy light and uses it to bend plastic films about the thickness of Scotch™ tape.

“Many polymers have stability limitations that result in slow degradation when exposed to high-energy ultraviolet light,” Kennemur said. “Using lower-energy visible light is a great way to circumvent this issue.”

The FSU team experimented with a photopolymer based on the chemical compound stilbene. Stilbene by itself has limited applications, but it can be used to make dyes, optical brighteners or dye lasers.  Hanson, Kennemur and Oates applied a mechanism called a triplet sensitizer to the polymer that allowed it to soak up the low-energy light and convert it into high-energy mechanical work.

When the research team shone a low light at the stilbene-based plastic films, they saw the films bend in response to the energy transfer.

“It is remarkable how, for the first time, low-energy photons can manipulate stilbene to precisely control the shape of a polymer with polarized light,” Oates said.

Given this proof of concept, the researchers plan to refine this process further in the future using a variety of polymer structures, light absorbing nanostructures and advanced modelling tools.

This work was funded by FSU’s Council on Research and Creativity, the National Science Foundation and Department of Defense.

0 0 0
Previous : Your checklist for servicing your vehicles yourself
Next : Potential mine hazards monitored with Seismic Noise Analysis