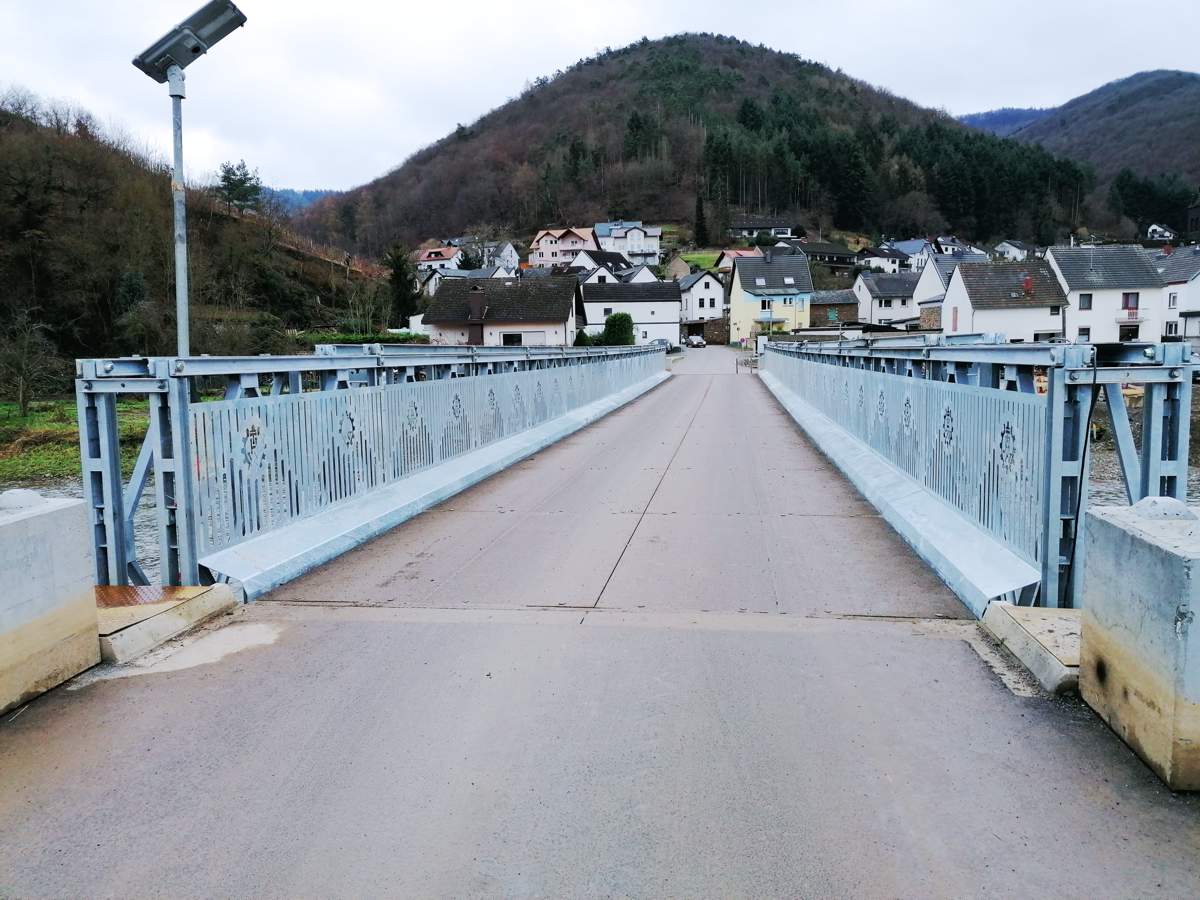 Mabey Bridge, an Acrow Group company specialising in modular steel bridging, announced today it has provided nine of its Compact 200™ bridges to help reconnect communities in Germany’s Ahr Valley in the aftermath of devastating flooding throughout much of Europe in July 2021.

The extreme weather event caused extensive damage across the valley, with countless roads damaged or destroyed and more than 60 bridges collapsed. With expedited restoration of the region’s transportation infrastructure an urgent need, four of Mabey Bridge’s modular structures were ordered in early August to re-establish ruined crossings in the town of Bad Neuenahr-Ahrweiler. Two of the bridges were ordered by the town and two by Bundesanstalt Technisches Hilfswerk (THW).

They were delivered just one week later using in-stock components from inventory, and rapidly assembled and installed by THW. The bridges were opened in September, with one designed for vehicular use and three for pedestrians and cyclists.

Based on the success of the first projects, Mabey Bridge was selected to provide five additional bridges to support continuing recovery efforts in the area. In mid-September 2021, THW ordered three vehicular bridges for the towns of Rech, Insul and Liers. Components were delivered to the sites three weeks later, installed by THW, and opened to traffic in November 2021. In early January 2022, the town of Sinzig ordered two bridges for pedestrian and cyclist use. One of the two bridges has already been installed with the second installation planned for completion at the end of September.

The nine structures supplied are Compact 200™ bridges ranging in length from 36 metres to 42 metres, and will serve either as permanent or long-term temporary solutions for decades to come. Unegg GmbH, Mabey Bridge’s partner in Central Europe, provided on-site technical assistance to THW for each project.

Some of the bridges were supplied with the Mabey SmartEdge™ System, a customisable, galvanised steel panel that attaches to the bridge deck to clad the trusses safely, providing an aesthetically-pleasing alternative to more traditional steel or mesh.

Mabey Bridge’s modular steel structures use pre-engineered components and can be configured for length, width, and load requirements. Easily delivered from stock to the most challenging locations, Mabey’s bridges are rapidly deployed and erected by hand or with light plant, making them an ideal choice for temporary or permanent emergency applications.

Michael Treacy, CEO Mabey Bridge, said: “Mabey Bridge has a long history of providing solutions to aid in rebuilding infrastructure in the wake of natural disasters. We are dedicated to supporting nations during these times of need and will continue to play our part in these vital projects to reconnect affected communities.”