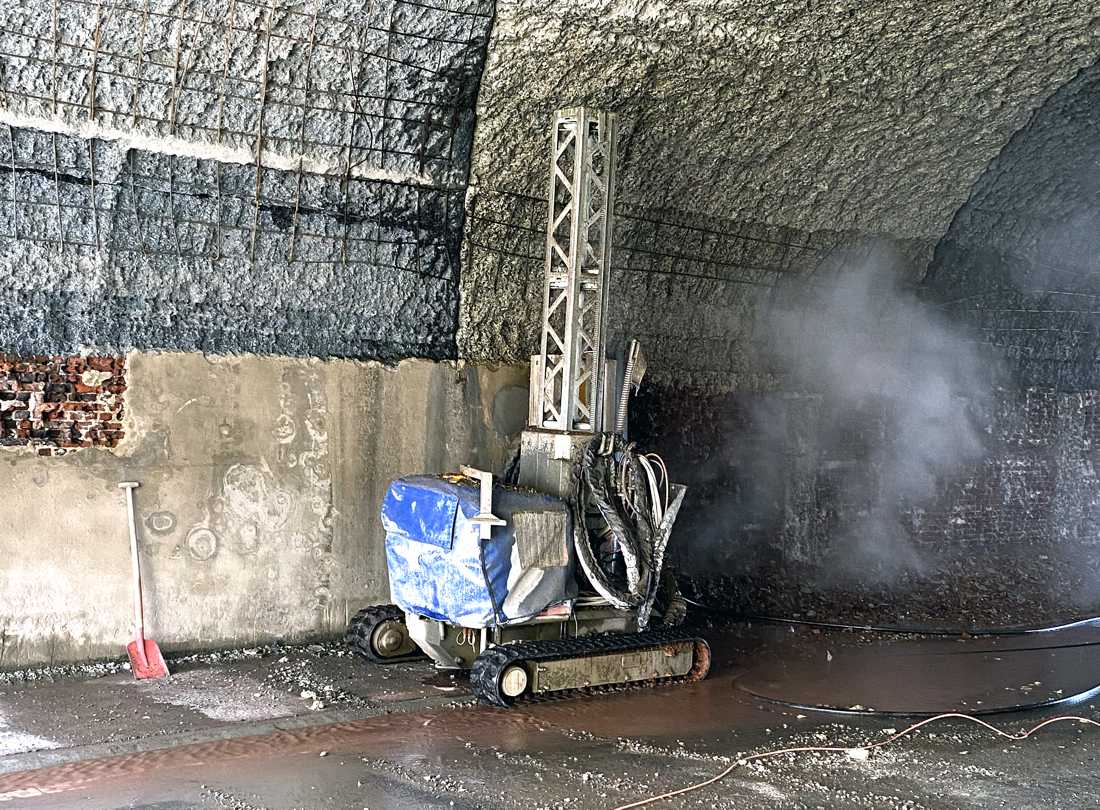 Powering through challenges with Hydrodemolition

Powering through challenges with Hydrodemolition

In Europe, some of the first signs of infrastructure date back to the late Middle Ages. Early roads, bridges and canals were made with logs driven into mud or mixtures of large stone and gravel.

By the time the first paved roads were created in the 1800s, repairing infrastructure was anything but a new concept. As time went on, tools like jackhammers were invented as a faster way to break out concrete. In modern day Europe, remote-controlled Hydrodemolition robots are the next evolution and are growing in popularity as a safer and more efficient alternative to remove concrete in tunnels, parking garages, buildings and more.

It is no surprise that when a major tunnel repair was required in Belgium, Hydrodemolition was the method of choice. The tunnel, which ran under a busy railroad, was becoming a safety hazard because parts of the concrete were falling down into the roadway. The job was to remove 6 to 7 centimetres of concrete from the ceiling and walls of the tunnel. With the growing concern of more concrete falling, this project required an experienced team to operate the equipment in cold weather and complete the job as quickly as possible.

Hompert-Renes B.V., a Netherlands-based Hydrodemolition company, took on the challenge and not only removed a total of 42 cubic meters from the ceiling and walls, but completed the project in just two weeks. Using Aquajet’s industry-leading technology, Hompert-Renes B.V. was able to prioritize efficiency and go above and beyond the original requirements.

In 1998, Marchel Hompert and his partner, Francien Renes, started a company in the Netherlands called Hompert-Renes B.V., a business that focuses on a variety of services, but primarily on Hydrodemolition. Hompert’s interest in the cutting-edge technology all started with a simple video clip on the internet. When he first saw Hydrodemolition in action, he was intrigued by the opportunities it presented for the industry and wanted to take a deeper dive to research the benefits that come with this method of concrete removal.

Hompert was eager to start taking on work in the Hydrodemolition field and rented a Hydrodemolition robot for projects with bridges, parking garages, new buildings and more. As projects started trickling in for bridges, there’s one job that stands out to Hompert as a pivotal point in his Hydrodemolition journey.

Hompert-Renes B.V. was subcontracted in Belgium to remove old concrete and repair a bridge with their Hydrodemolition robot; however, the contractor cancelled at the last minute and decided to buy his own equipment to reduce costs. Hompert followed up with them a while later and learned they didn’t end up incorporating Hydrodemolition into their business and the Aquajet equipment they bought wasn’t being used.

Hompert had observed Aquajet equipment previously and noticed it outperformed the equipment he was renting in efficiency, safety and versatility. When he learned the contractor had no plans to add the Hydrodemolition equipment into his business, Hompert worked out a deal to acquire his machine.

The differences were amplified when Hompert began using the Aquajet equipment.

“The Equal Distance System on the Aquajet equipment provided a major advantage for projects,” said Hompert. “This technology uses a preset distance from the nozzle to improve water pressure consistency, which provides a higher removal rate compared to standard systems, and allows you to efficiently remove concrete at deeper depths.”

The purchase of this Aquajet equipment opened new project opportunities for Hompert, including an important tunnel job for a construction company in Belgium.

Fast forward to February 2021 in Elewijtsesteenweg 8 in Zemst, Belgium. Hompert-Renes B.V. had been contracted by Renotec, a Belgium-based company that restores and renovates buildings, to complete a critical tunnel project. This tunnel had very old concrete and ran under a busy railroad, which meant it needed to be repaired as soon as possible. Hydrodemolition was the clear solution for this project because of its safety and efficiency benefits over manual methods along with the ability to remove concrete while leaving rebar intact.

That’s where the Aqua Cutter 710 Evo came in. The innovative design gives the operator freedom to reach horizonal, vertical and overhead areas up to seven meters without support, which is ideal for concrete removal in tunnels. Although the project seemed like a straightforward fix on the surface, there was a certain challenge that stood in their way – the weather.

With winter weather in full force, frigid temperatures averaging -8 degrees Celsius in the evening and around 0 degrees Celsius during the day created challenges for using a water-based solution.

The rise of COVID-19 also had an effect on finding the right company for the job. With borders closed and strict quarantines in place, finding a crew that had the ability to travel to Belgium didn’t make the process any easier. Despite the global pandemic, this was considered a critical project and the crew was required to stay in Belgium with 48-hour quarantines before and after the project.

“One of the long-term benefits we’ve noticed from owning our own equipment is that we’re able to make our services more affordable,” Hompert said. “Many Hydrodemolition companies rent their equipment, which creates additional costs for everyone involved.”

A Problem and a Solution

Hompert-Renes B.V. sent a crew of two to take on the tunnel project – one to operate the Aqua Cutter 710 Evo and another as a machinist for the Hammelmann HDP 487 high-pressure pump. They got special papers to travel from the Netherlands to Belgium and after quarantining for 48 hours, they were ready to begin.

“Shortly after our crew started on the project, we realized we needed to remove more of the tunnel than originally planned because there was more damage and decay than expected,” said Hompert. “The crew ended up working on the entire tunnel with the exception of the floor.”

Hompert’s team ended up removing more than 80% of the tunnel walls and ceiling and worked 7 a.m. to 7 p.m. each day to complete the project in the tight, two-week schedule. They used a fire hydrant as the water source for the Aqua Cutter and sealed up the tunnel with tarps and worked inside to combat winter weather. Since the water source was 250 meters from the tunnel, Hompert’s team used hoses to pump the water where it needed to go. Once the water came through, the high-pressure performance of the Aqua Cutter caused the cold water to come out hot. This helped keep the tunnel at a comfortable temperature during working hours and helped minimize freezing.

Although the crew faced plenty of challenges during work hours, the real issues would develop overnight as the water froze.

“We knew the water in the hoses would freeze overnight so we emptied them at the end of every day,” Hompert explained. “Even with this process, we needed to thaw the hoses in the mornings with a flame and heater and it took us about 2-4 hours a day to remove all the ice from the hoses, which ended up being the hardest part of the project.”

Even with all the challenges the project entailed, the team was still able to complete the project in 2 weeks with just an Aqua Cutter and a pump.

Roads and bridges have certainly evolved over time and so have the methods used to repair them. Companies like Hompert-Renes B.V. are revolutionizing concrete removal for road and bridge repairs by replacing jackhammers with Hydrodemolition.

Not only is this more efficient than manual methods, it also limits noise and dust pollution, reduces the risk of injury for operators and eliminates microfractures for an increased lifespan of the infrastructure. To keep up with the growing list of repairs, Hydrodemolition is a clear solution that maximizes the safety and efficiency of everyone involved.

0 0 0
Previous : Momentum IoT invents Toolie™ Tool and Workforce Activity Tracker
Next : The Future of Digital Roads in the UK