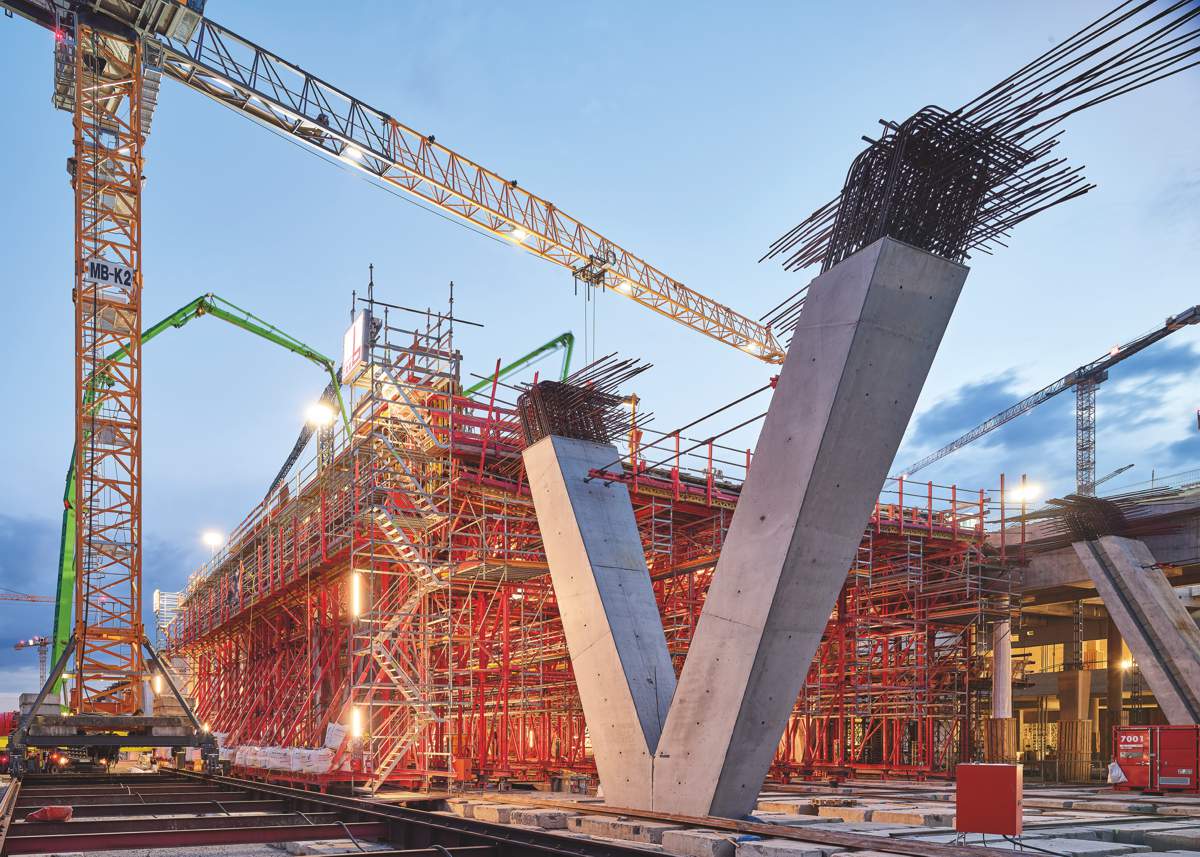 At the south end of Frankfurt Airport, Terminal 3, with its futuristic design, is currently one of Europe’s largest infrastructure projects. Upon completion of construction in 2024, up to 19 million travellers will be able to arrive at and depart from the three new gates each year.

PERI assisted Max Bögl with the construction of the drive-by platform, which will in future provide passengers with direct access to the departure level of Terminal 3.

The 550-m-long and 27-m-wide drive-by platform with its total bridge area of 15,300 m² is supported by 70 V-shaped columns at a height of over 10 m and connects the two access and departure ramps to the terminal. 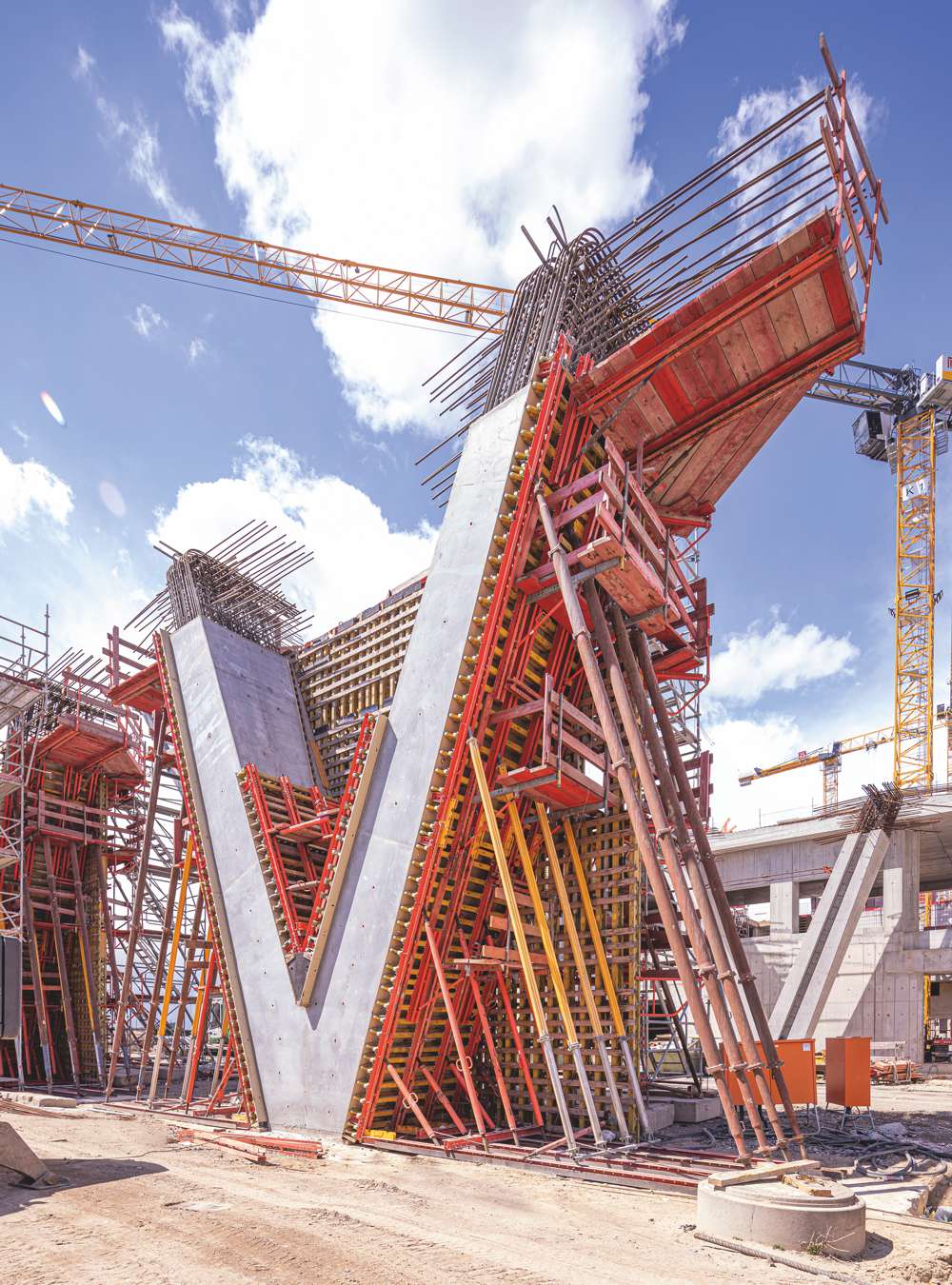 Engineers from PERI designed a customised formwork carriage for this complex construction project using the VARIOKIT Engineering Construction Kit and the PERI UP Scaffolding Kit as a basis. 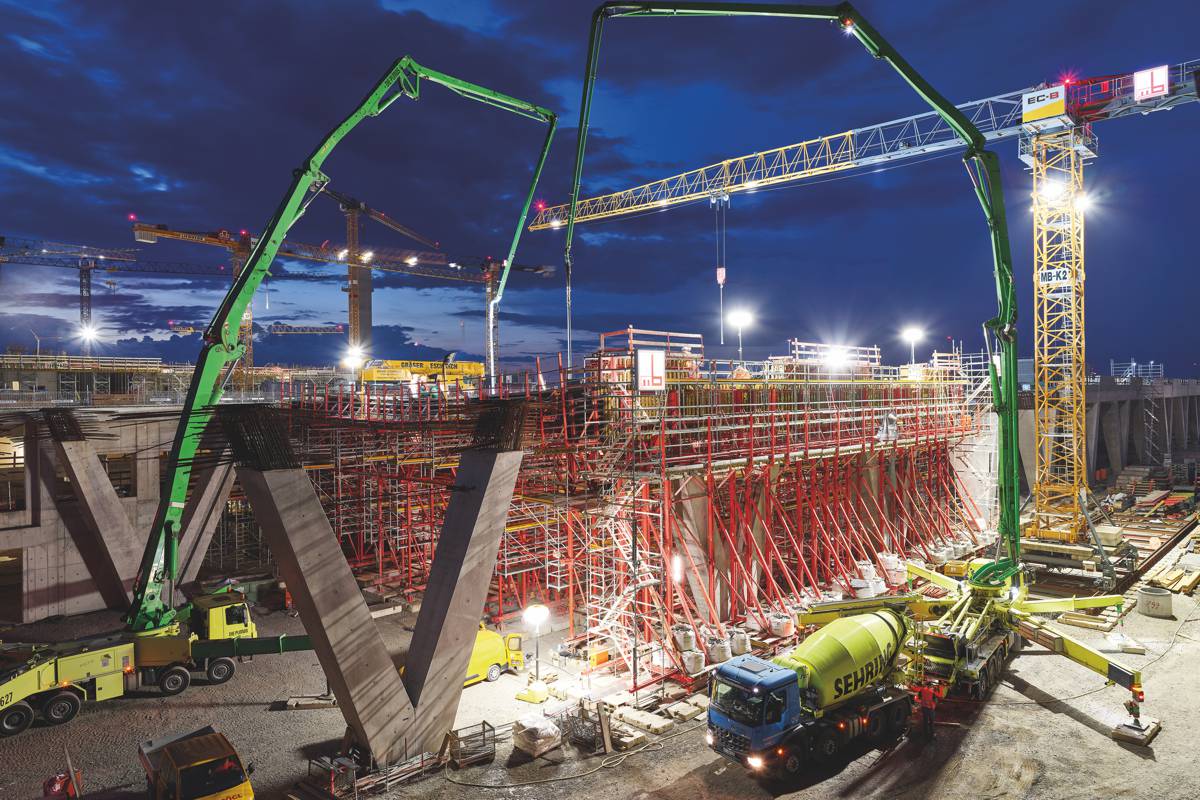 With an integrated hydraulics system, the entire formwork carriage could be lowered by 2.20 m for striking and repositioning.

For the relocation process in the longitudinal and transverse direction, PERI developed a special hydraulic walking gear that could be transported back and forth between the individual carriage units quickly, easily and manually. 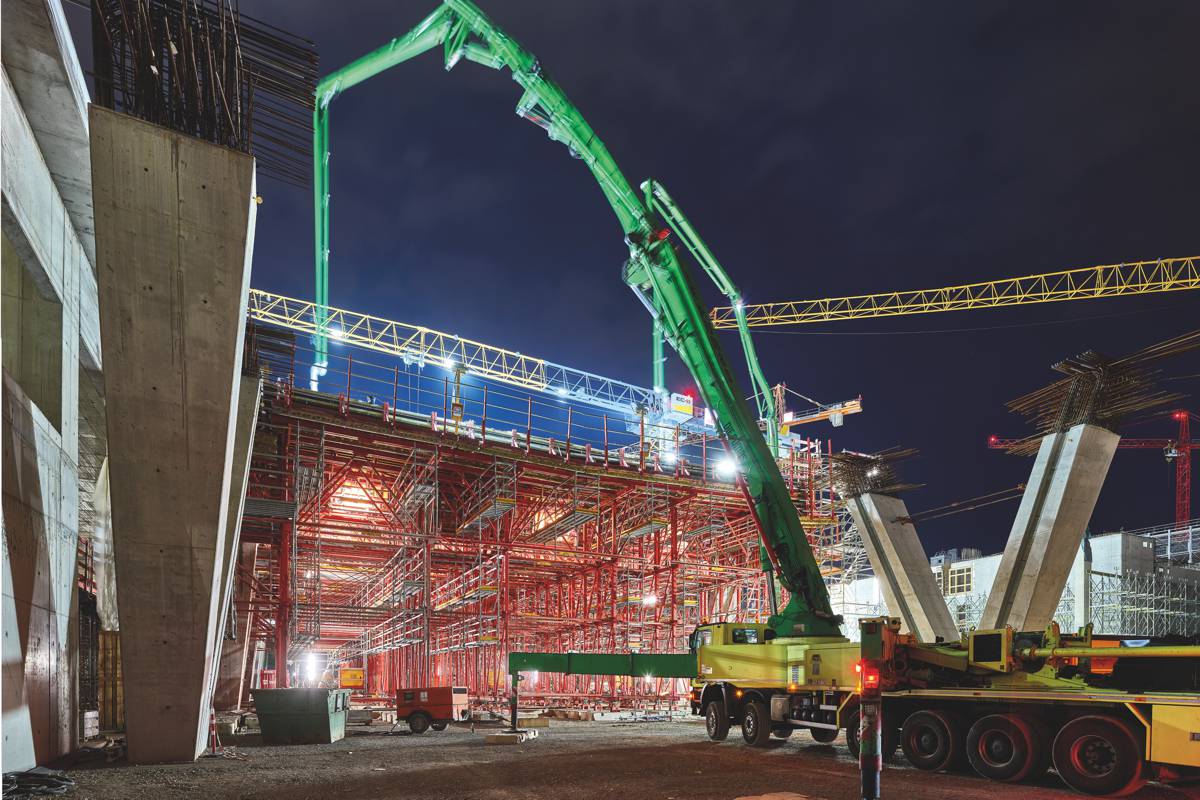 The beams – a separate challenge

The formwork of the oblique-angled and V-shaped beams of the drive-by platform posed a particular challenge. In this case, it was necessary to shutter and strike the beams separately from the formwork carriage – and in a very confined area.

This was realised by means of a folding mechanism and the MAXIMO Structure Panel Formwork because of the lower construction height compared to the girder formwork. MAXIMO Structure also made it possible to achieve the desired SB2 architectural concrete class. 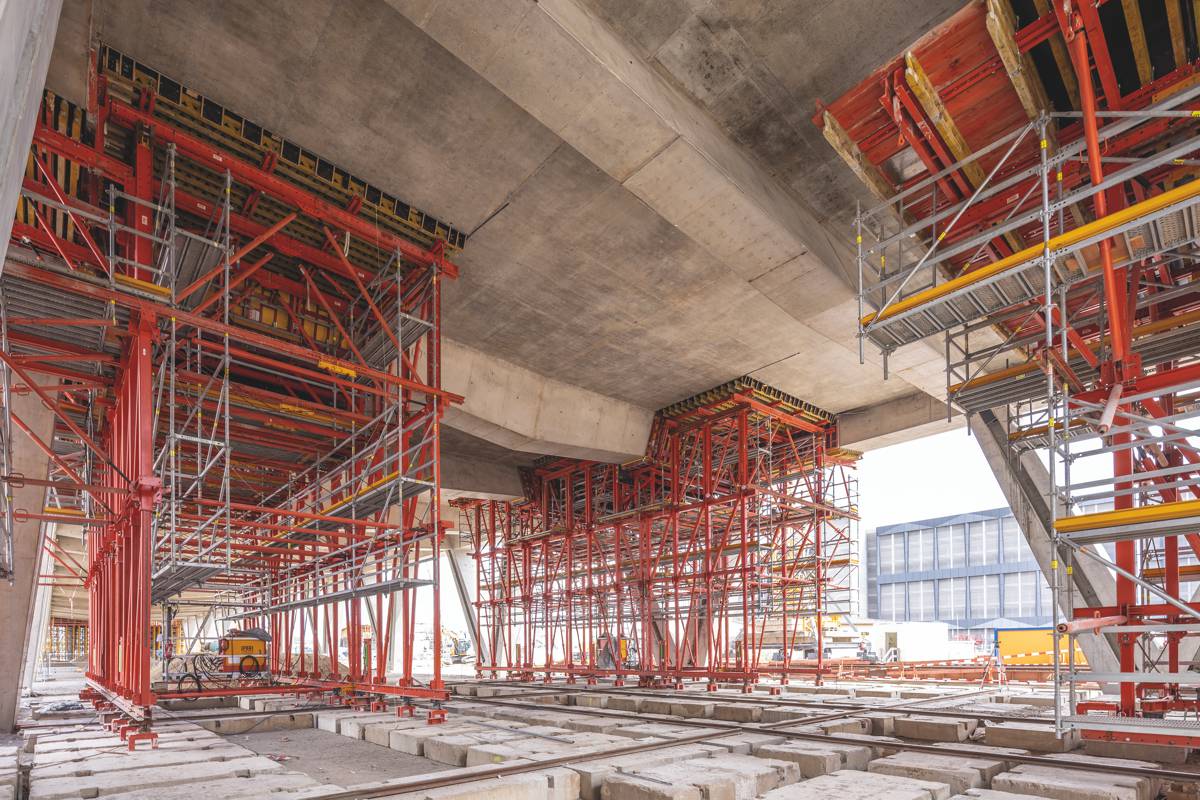 Faster and safer with excellent documentation

The documentation of the formwork carriage was a key area of focus. In addition to the verifiable structural calculation, which comprised over 1,500 pages, a partly digital operating manual with an independent CE marking was created. QR codes could be scanned to open short video sequences that explained the work steps in detail.

It took more than 16 hours to concrete the first 36-m-long concreting section. All deformations were within the tolerance range. A total of 14 construction phases needed to be carried out to complete the project. The formwork carriage, weighing almost 500 t, was ready to be moved to the next cycle within just one week – almost two weeks faster per concreting section than originally planned. 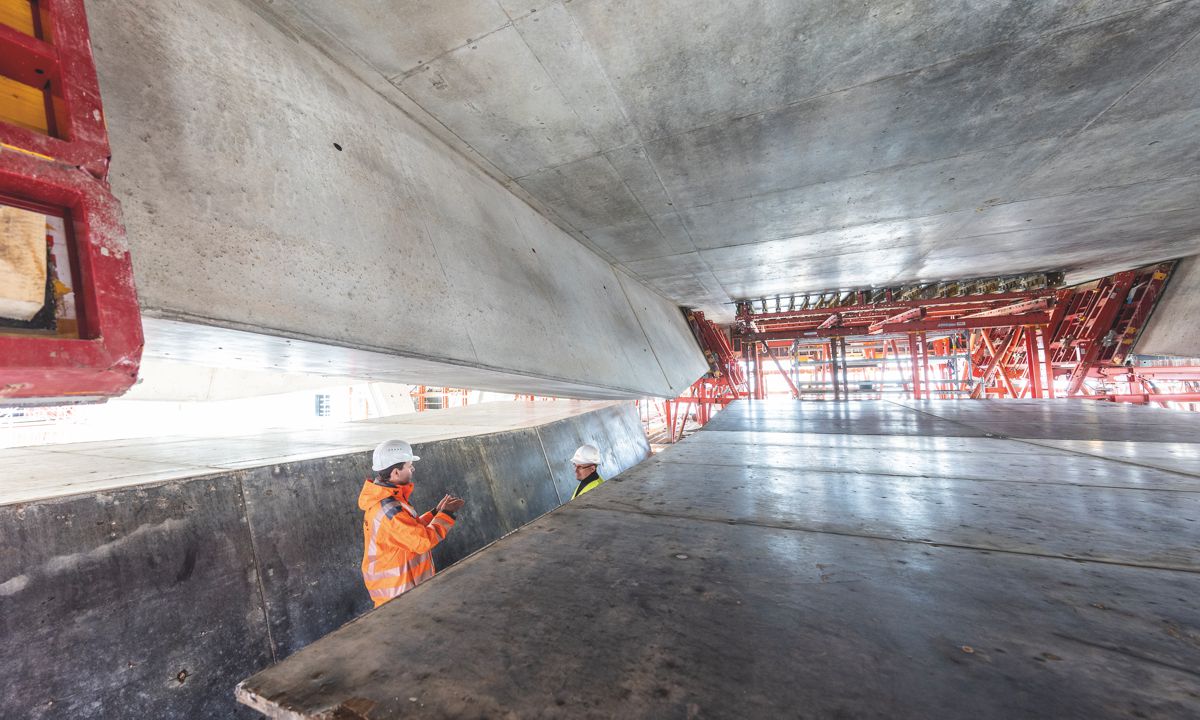