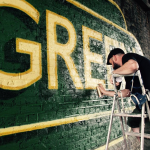 London’s historic railway bridges are being transformed into stunning pieces of art thanks to Network Rail’s unique partnership with a street artist and community groups. Network Rail has teamed up with Lionel Stanhope, a sign writer renowned for his vintage typography work, to paint murals on the railway across the capital. Lionel, who has painted sets for Hollywood movies and even Disneyland, has transformed nine bridges so far, and has now set his sights on completing another five murals before the end of the year.

“I trained as a sign writer so lettering is my thing and I paint scenery for films,” he said. “So I love working on anything big and these signs are 50 feet wide by 12 feet deep.

“I really enjoy doing these signs for Network Rail because I like to work on big pieces, plus it’s cool to get so much positive feedback from people, especially in Brockley where I’ve lived for 15 years.”

The vintage railway-style signs first graced a wall in Herne Hill after the community launched a successful crowdfunding campaign for artwork, which they hoped would help rejuvenate the area.

Since then, community groups keen to make their neighbourhoods cooler have crowd funded for similar work with two signs in Hither Green, two more in Catford, one in Lionel’s native Brockley and Forest Hill.

More recently Lionel painted murals at Lee and Nunhead. Next up are signs at West Norwood, Brixton, Clapham and Selhurst, where residents also joined forces recently to create their own mural.

Lionel, who works at Elstree Studios painting scenes for TV shows and movies, added: “Some of these railway bridges are on the south circular, so all the heavy traffic has made them quite grim to look at.

“So these murals really help brighten the place up. I design the signs, all in the same typography but with two or three colours to choose from, then the community usually create an online poll to vote for their favourite.”

Lionel continued: “I’ve also personalised some of the signs based on suggestions from local people, so I painted a Walrus in Forest Hill because they have had one on display in their local museum for over a century, and I added a heron in Lee because they’ve got herons in the park.

“I’ve been inundated with emails from communities wanting something similar and I plan to paint another five before the end of the year, so we could end up doing 20 in total.”

Eddie Burton, Customer Service Manager at Network Rail, said: “It’s been incredible working with Lionel to breathe new life into the railway. The artwork will inspire pride in people’s neighbourhoods and encourage people to respect railway bridges and other structures.

“We’re looking at similar areas that could benefit from a makeover and hope to continue these fantastic murals across the capital.”

Contact Eddie Burton if you want one of Lionel’s signs to brighten up a railway structure in your neighbourhood!