Highways England issued new guidance for its supply chain today, to support them using 60mph more often within roadworks, where it is safe to do so.

After extensive and innovative research and trials, Highways England confirmed that where it is safe for road users and roadworkers, and where shown on road signs, vehicles can be driven at up to 60mph.

Findings announced today by the government company show using 60mph within roadworks on eight road schemes resulted in road users saving on average (across all sites) up to 3,778 hours journey time each day and more road users stayed within the speed limit than when compared to driving at 50mph.

The company’s supply chain has been instrumental in the trials and today Highways England has published a new toolkit “Implementing the highest safe speeds”. This will allow Highways England projects teams and their supply chain partners to decide what is the most appropriate and safest speed for the type of work being planned, such as major reconstruction of the road or large-scale major projects to build new junctions or to add in new technology and extra traffic lanes.

Jim O’Sullivan, Highways England Chief Executive, said: “All of our research shows that road users benefit from 60mph limits in roadworks. They have shorter journey times and feel safe.

“Road users understand that roadworks are necessary, but they are frustrated by them. So testing 60mph has been about challenging the norm while ensuring the safety of our people working out there and those using our roads.

“We have a huge programme of work planned, so being able to use 60mph where safe will continue to improve everybody’s experience of our roads.”

Highways England recently completed delivery of the Government’s first road investment programme. Roadworks are necessary to carry out the improvements.

The 60mph through roadworks trial looked at different ‘scenarios’ within roadworks on England’s strategic road network of motorways and major A roads, and was funded through Highways England’s ring-fenced innovation designated fund. 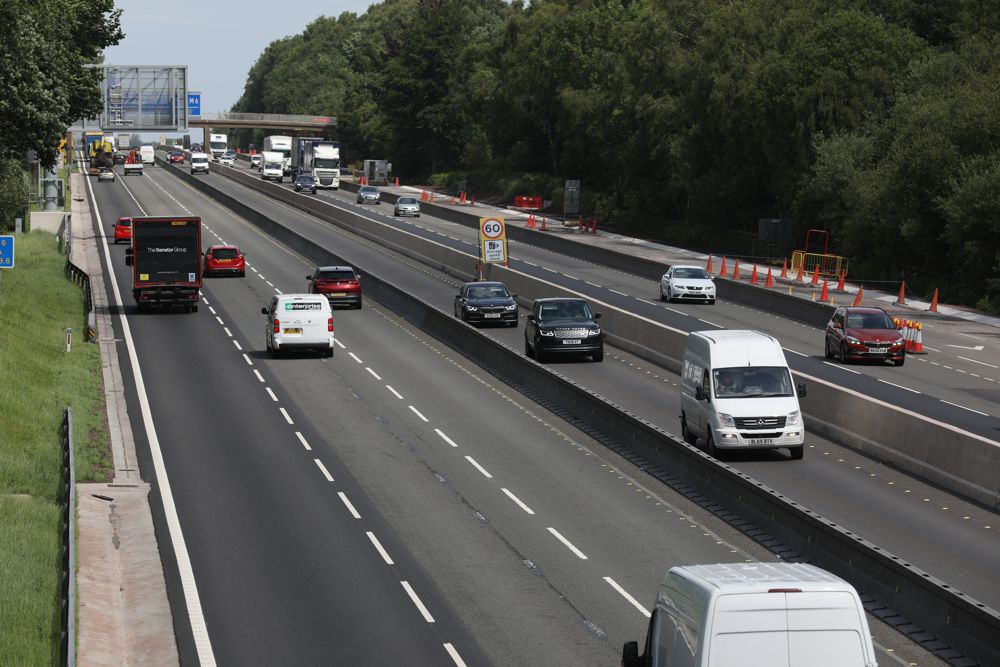 Some road projects, which trialled 60mph during an eight or 10-week period over the last 18 months, were confident with how the increased speed limit was operating so rolled it out further within the roadworks or kept it on until the work completed.

“The changes from the standard operation of 50mph included installing wider lane widths and markings, as well as additional message signs to aid the travelling public and the site work force when entering and exiting the works. The temporary barrier system was upgraded to cope with the higher speeds. This needed us to give up working space, which we were able to do safely.

“Following an initial successful trial period and review we all agreed that the 60mph could be extended both in length and duration. This continues to be monitored to ensure it is operating safely and delivering the benefits to the public.”

Anthony Smith, chief executive of the independent watchdog Transport Focus, said: “We know road users want speed limits in roadworks to be no lower than necessary to maintain safety – so 60mph in roadworks wherever it is safe to do it is a welcome step.”

As with the trials, future roadworks using 60mph will need to consider how the traffic management through the roadworks is designed to factor in the increased limit and keep road workers and the travelling public safe. Depending on the type of work, this could include installing barriers and crash cushions (high-visibility impact protection) tested for higher speed limits; ensuring appropriately sized working areas, lane widths, road markings and signage; remote-controlled “prism” signs for dynamically changing the speed limit from 50mph to 60mph and back again; and portable message signs so additional information can be given to customers at the roadside, such as there being a broken-down vehicle up ahead.

Working with Highways England and Transport Focus, the contractors involved in completing the major resurfacing on the A1(M) trial site in Yorkshire, produced a short film to show the industry how they introduced the 60mph in contraflow within the traffic management, working collaboratively to help make it a success and safe for all involved.

For more information about the 60mph within roadworks trials visit Highways England’s website.