East Midlands HS2 links to be revolutionised with £2.7bn hub station at Toton

East Midlands HS2 links to be revolutionised with £2.7bn hub station at Toton

A £2.7 billion transport plan to guarantee fast, frequent connections to the HS2 East Midlands Hub station at Toton has been published, promising to spearhead the region’s economic renewal post COVID-19 and accelerate the benefits of HS2.

The plan – published by a group of councils, transport bodies and East Midlands Airport – includes new and improved rail, bus and tram networks and enhanced road infrastructure. Under the proposals, over 20 villages, towns and cities across the East Midlands will have direct access to the HS2 station, including Leicester, Nottingham, Derby, Newark, Matlock, Mansfield and Long Eaton.

The vision is split into three phases, with the first earmarked for completion by 2030, to stimulate development before HS2 trains first arrive in the East Midlands. These improvements are fully integrated with the work of the East Midlands Development Corporation, which has government backing to deliver 84,000 highly-skilled jobs and 4,500 homes at key growth sites close to the HS2 station at Toton, including East Midlands Airport, Chetwynd Barracks and Ratcliffe-on-Soar Power Station.

The East Midlands currently has the lowest transport spend per head of anywhere in the UK (£245), 49 per cent below UK average (£483) and less than a quarter of that allocated in London (£1019). If the East Midlands was funded in line with the UK average, it would receive £1billion extra to spend on transport each year.

Under this plan, the region will begin to see the creation of high-value jobs and housing before high-speed trains reach Toton, improving transport connectivity and social mobility for some of the region’s most deprived communities. 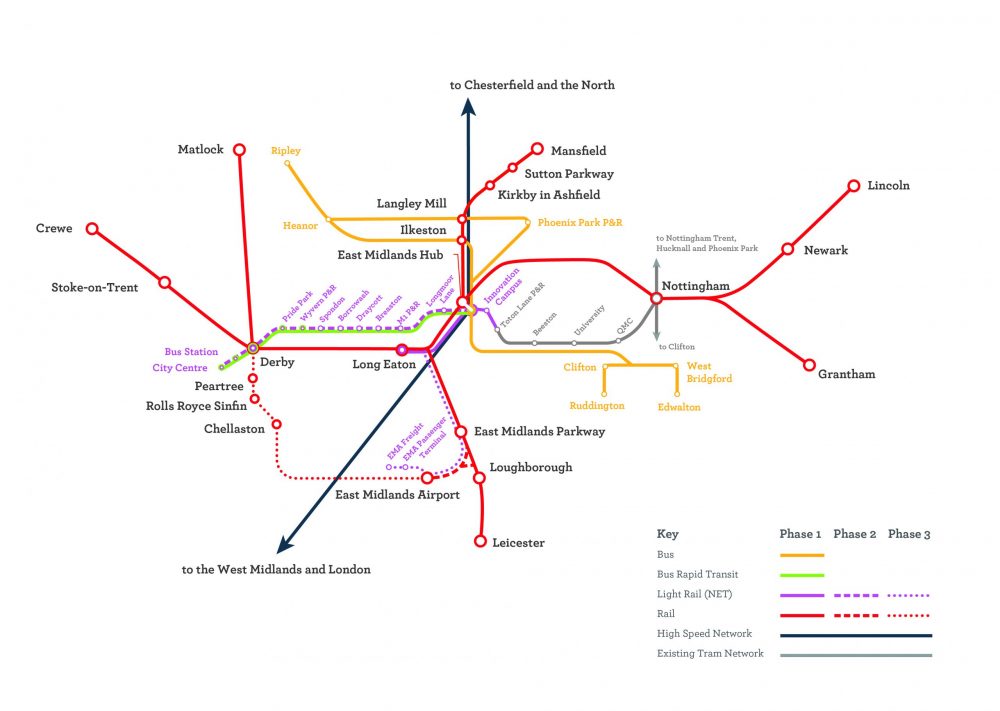 Phase One of the scheme, which could be implemented and operational within the next ten years includes plans for:

Phase Two of the scheme, which could be up and running within 20 years, includes:

The final raft of improvements in Phase Three, which would be completed within 25 years, include:

Sir John Peace, chairman of Midlands Connect and Midlands Engine said: “The arrival of High Speed Two is a watershed moment for our region, and an opportunity that we must grasp with both hands. As we work towards an economic renewal post-COVID-19, the East Midlands must step forward and work together to secure the transport network, economic future and social mobility it deserves.

“This truly integrated transport strategy isn’t just about connecting more people to the HS2 station; it will also support the building of new homes, accelerate transformational regeneration and link some of our most deprived communities to nationally-important assets across the East Midlands. It means spreading the benefits of high speed rail to businesses and workers across the region, from our great cities of Derby, Leicester and Nottingham, to bustling towns like Mansfield and Loughborough and smaller communities that may otherwise feel HS2 won’t benefit them. Our message to Westminster is clear; support us in making this vision a reality.”

Cllr Kay Cutts MBE, leader of Nottinghamshire County Council and chair of the HS2 East Midlands Growth Board, said: “The arrival of High Speed Two in Nottinghamshire will bring with it widespread regeneration, development and highly-skilled jobs. This comprehensive plan ensures that communities in our towns and villages can access these opportunities, and that the benefits of this investment are spread far and wide. This isn’t just a transport project, it’s about securing a successful future for our people, promoting prosperity and social mobility for generations to come. We need to work alongside Government to ensure that the East Midlands sees benefits as soon as possible.”

Cllr Chris Poulter, leader of Derby City Council, said: “The opening of our new high speed network will be a game changer for the East Midlands, but it’s only once the East Midlands Hub is connected with growth sites and assets from across Derbyshire that its true impact can be realised. It’s essential that these plans are brought forward, vastly enhancing connectivity across the city of Derby and beyond, with new links from the train station to the city centre, on to Pride Park, and importantly to the HS2 station at Toton. If we do this right, we can future proof our transport network and enhance connectivity across the region.”

Cllr David Mellen, leader of Nottingham City Council, said: “This transport plan will connect every corner of Nottingham to new housing developments, leisure facilities, jobs and of course, the high speed rail network at Toton. We’re passionate about sustainability in this city, and by moving these plans forward we can ensure that everyone, including our most deprived communities have access to a well-connected, green, transport network.”

A Business Case for the Access to the HS2 East Midlands Hub project was funded by local partners and submitted to the Department for Transport in spring 2020. The findings will be submitted as evidence to the National Infrastructure Commission’s Rail Needs Assessment, which will inform the government’s High Speed North Integrated Rail Plan to maximise the benefits of HS2 Phase 2b.

The partnership is now seeking an initial £4.5million in funding from Government to allow Phase One of this scheme to be brought forward to the next stage of development, including the production of more detailed project designs, engineering solutions and costings.

0 0 0
Previous : An expert guide to the best deep-drilling equipment
Next : National Infrastructure Commission reports vital infrastructure must be ready for the future