Hyundai Motor Company today delivered the first seven units of its XCIENT Fuel Cell, the world’s first mass-produced fuel cell electric heavy-duty truck, to customers in Switzerland, with a total of 50 hitting the roads there this year.

The delivery of XCIENT Fuel Cell marks the official entry of Hyundai’s commercial vehicles in the European market, a touchstone for the company’s expansion into the North American and Chinese commercial markets.

“The delivery of XCIENT Fuel Cell starts a new chapter not only for Hyundai’s hydrogen push, but also the global community’s use of hydrogen as a clean energy source,” said In Cheol Lee, Executive Vice President and Head of Commercial Vehicle Division at Hyundai Motor. “Today’s delivery is just a beginning as it opens endless possibilities for clean mobility. With successful delivery of the first XCIENT Fuel Cell trucks, we proudly announce our plan to expand beyond Europe to North America and China where we are already making great progress.”

Production capacity of the XCIENT Fuel Cell will reach 2,000 units per year by 2021 to support its expansion into Europe, the U.S. and China as demand for clean mobility grows. The increase in capacity will be backed by a USD 1.3 billion investment in addition to a previously announced USD 6.4 billion stake in establishing a hydrogen ecosystem to support creation of a hydrogen society. 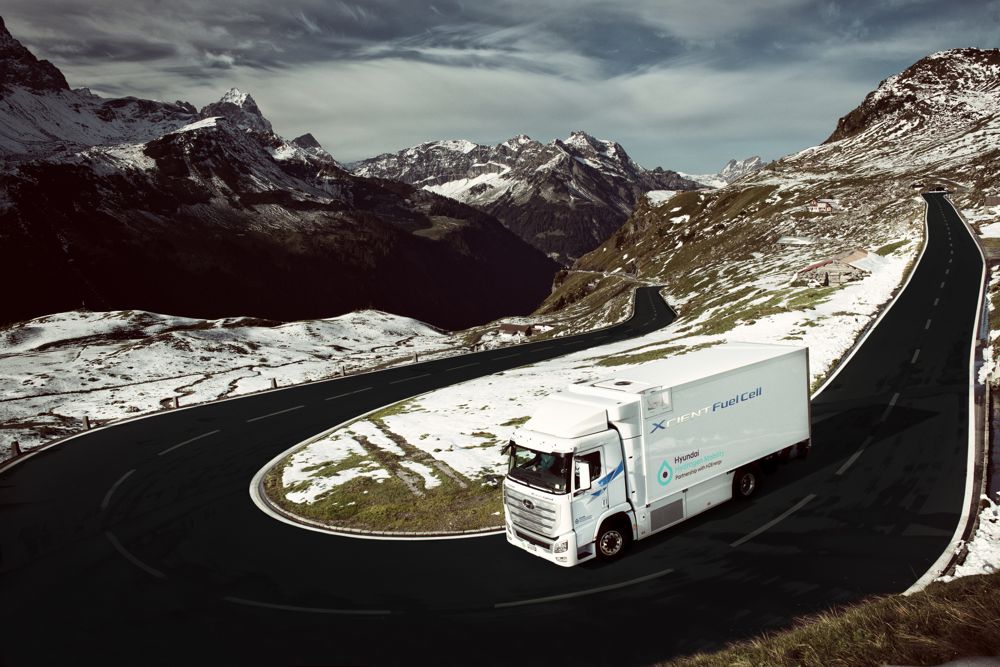 In the U.S., Hyundai is collaborating with logistics leaders to supply mass-produced fuel cell heavy-duty trucks. Hyundai revealed the fuel cell-powered HDC-6 NEPTUNE Concept Class 8 heavy-duty truck at the North American Commercial Vehicle (NACV) Show in October 2019, hinting at what the future holds and Hyundai’s plans for it. To back this plan, Hyundai is partnering with companies to build a complete hydrogen value chain covering everything from hydrogen production and charging stations to service and maintenance. The North American market will also get a 6×4 tractor model. By 2030, Hyundai expects more than 12,000 fuel cell trucks to hit the U.S. roads.

Hyundai also is working with various parties in China, which aims to get 1 million hydrogen vehicles on its roads by 2030 as the country’s hydrogen industry is on a sharp growth trend, creating massive potential. Initially, Hyundai will focus on China’s four major hydrogen hubs: Jin-jin-ji, Yangtze River Delta, Guangdong Province and Sichuan Province. It is currently discussing cooperative initiatives such as a joint venture with local partners.

Three fuel cell electric trucks are scheduled for launch in China: a medium-duty truck in 2022, a heavy-duty truck in in a couple of years, and another heavy-duty truck strategically designed for the China market. With these models, Hyundai’s goal is to achieve aggregate sales volume of 27,000 units by 2030.

A key to Hyundai’s global expansion of fuel cell trucks will be the successful launch of XCIENT Fuel Cell in Europe. The seven customers who received the first batch of XCIENT Fuel Cell trucks will haul payloads of consumer goods around Switzerland, emitting nothing but clean water. The operations will be backed by a robust green hydrogen ecosystem.

In 2019, Hyundai Motor Company formed Hyundai Hydrogen Mobility (HHM), a joint venture with Swiss company H2 Energy. HHM also is partnering with Hydrospider, a joint venture of H2 Energy, Alpiq and Linde. The customers will be leasing XCIENT Fuel Cell trucks from HHM on a pay-per-use basis that does not require an initial investment. Hyundai will take the success in Switzerland to broader European markets as Hyundai establishes solutions and partner networks in Germany, Norway, the Netherlands and Austria. 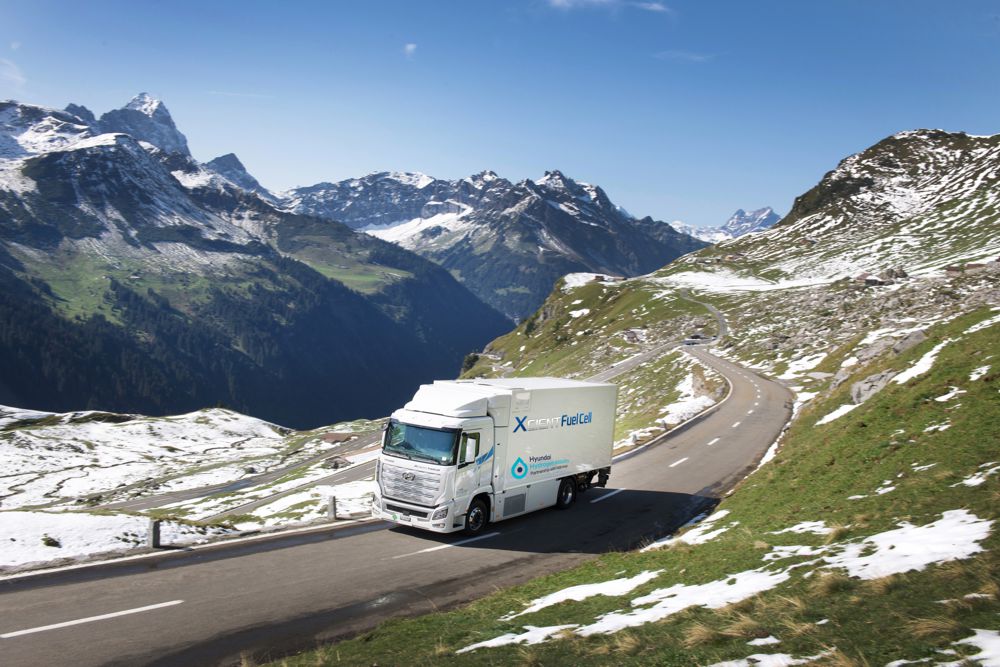 As part of its production expansion plan, Hyundai expects to supply 1,600 commercial fuel cell trucks by 2025. Currently, Coop, Migros, Traveco, Galliker Logistics, Camion Transport, F. Murpf AG and G. Leclerc Transport AG along with others have placed orders for XCIENT Fuel Cell. They will be utilizing the trucks to haul everything from food to cars around Europe.

To support the growing hydrogen ecosystem, Hyundai has a business case for more than 100 hydrogen fuelling stations in Switzerland, which is enough not only for commercial vehicles, but also passenger fuel cell electric vehicles. Likewise, Hyundai plans to act as a sector coupler in bringing various players to the hydrogen value chain as part of its efforts to bring value.

XCIENT is powered by a 190-kW hydrogen fuel cell system with dual 95-kW fuel cell stacks. Seven large hydrogen tanks offer a combined storage capacity of around 32.09 kg of hydrogen. The driving range per charge for XCIENT Fuel Cell is about 400km*, which was developed with an optimal balance between the specific requirements from the potential commercial fleet customers and the charging infrastructure in Switzerland. Refuelling time for each truck takes approximately 8~20 minutes.

Hyundai will introduce a full model change for XCIENT Fuel Cell that will sit on a dedicated hydrogen fuel cell truck platform in the next few years. The new model will feature an e-axle and two 200-kW fuel cell systems that are under development. The new model line-up will include 4×2 and 6×2 cargo trucks and 4×2 tractors that can cover a significant portion of Europe’s major heavy duty truck market. The 44-ton GCW tractor will have a range of up to 1,000 kilometres on a single charge. These models will help the effort to replace pollutant-emitting diesel-powered trucks.

Hyundai has been devoting itself to further develop fuel cell technology and establish the supply chain to realize a ‘Hydrogen Economy’ for a better and cleaner future, an effort receiving worldwide acclaim. Hyundai Motor’s Hydrogen Mobility Solution won the Truck Innovation Award at the International Truck of the Year (IToY) last year, and XCIENT FC won the Innovation Award in hydrogen energy and fuel cell technology at the 5th Shanghai Forum held on September this year. 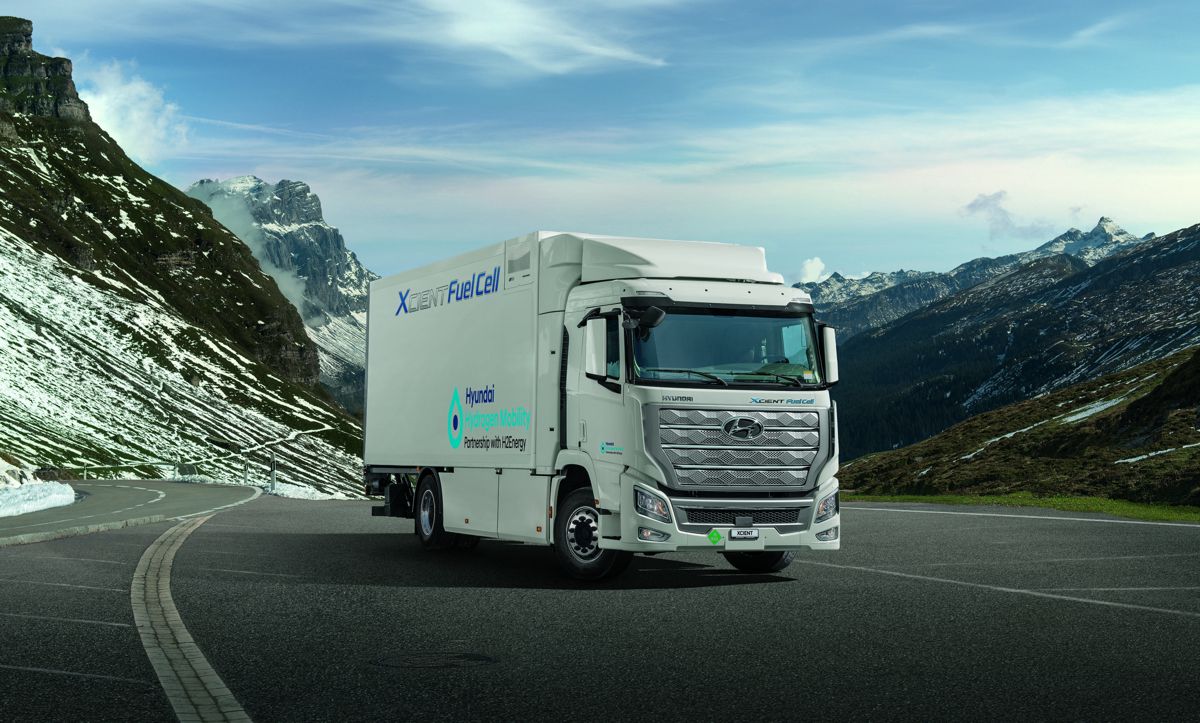