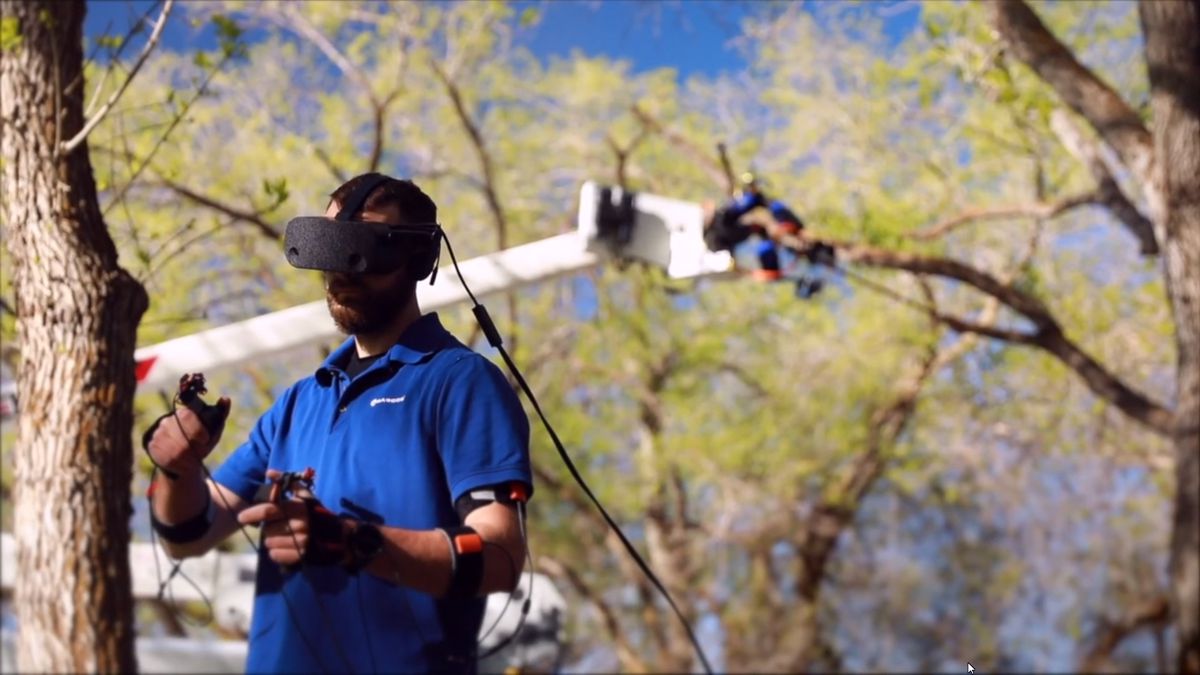 Sarcos Robotics, a leader in the development of robotic systems that augment humans to enhance productivity and safety, today announced it has successfully demonstrated its SenSuit™ controller garment.

As part of the next-generation technologies designed for enhanced teleoperation of the Guardian® XT™ highly dexterous mobile robotic system, this milestone leveraged Sarcos’ proprietary motion caption controller to enable enhanced teleoperation of the robot’s dexterous arms. Capable of lifting and manipulating up to 200 lb. (90 kg), the Guardian XT robot is ideal for accomplishing precision tasks and performing work in unstructured environments.

Sarcos recently put the advanced teleoperation control system, including the SenSuit motion capture controller, and Guardian XT robotic system, to work in a live tree-trimming demo at its headquarters in Salt Lake City.

According to the 2019 Liberty Mutual Workplace Safety Index, workers falling from height in the U.S. is the fourth-most disabling and costly injury after overexertion, falling from the same level, and being struck by an object or equipment. The Guardian XT robotic system—the upper-body variant of the award-winning Sarcos Guardian® XO® full-body, battery-powered industrial exoskeleton—is designed to perform intricate and dangerous tasks requiring human-like dexterity keeping the operator at a safe distance in challenging and hazardous conditions, including at height.

It is platform-agnostic and can be mounted to a variety of mobile bases to access hard-to-reach or elevated areas and applies to a number of industries, including power utilities, oil & gas, chemical processing, food processing, construction, infrastructure maintenance and repair, heavy manufacturing, maritime, distribution and warehousing, and park, forest, and commercial property management.

Expected to be commercially available by the end of 2022, the Guardian XT robot will integrate Sarcos’ SenSuit wearable controller and a high definition, virtual reality (VR) or augmented reality (AR)-based head-mounted display (HMD), delivering intuitive control of the robot and enabling the use of standard trade tools.

The SenSuit controller enables the Guardian XT robot to mimic the operator’s movements in real-time. It is an inertial measurement unit (IMU)-based motion tracker that communicates with the robot and leverages Sarcos’ proprietary force feedback technologies. The company also plans to integrate a VR- or AR-based HMD to provide remote visual and situational awareness to the operator. The Guardian XT robot is equipped with 3-degrees of freedom end effectors that enable dexterous control of trade tools and materials, including hand-held power tools, welding and cutting equipment, inspection and test equipment, parts and components, hazardous materials, and retail inventory goods, amongst others.

“We are proud of the significant strides we have made in enhancing teleoperation capabilities for the Guardian XT robot as we march towards commercialization next year,” said Ben Wolff, chairman and CEO, Sarcos Robotics. “Our new control system is expected to enable our customers to seamlessly and efficiently perform difficult tasks and to operate in dangerous environments—including at height—while keeping the operator safe and out of harm’s way. We believe the integration of these advanced technologies, including our proprietary SenSuit controller, will set the gold standard for the teleoperation of robotic systems in the coming years.”

On April 6, 2021, Sarcos announced that it will become publicly listed through a merger transaction with Rotor Acquisition Corp., a publicly-traded special purpose acquisition company. The transaction is expected to close in the third quarter of 2021, at which point the combined company’s common stock is expected to trade on Nasdaq under the ticker symbol STRC.