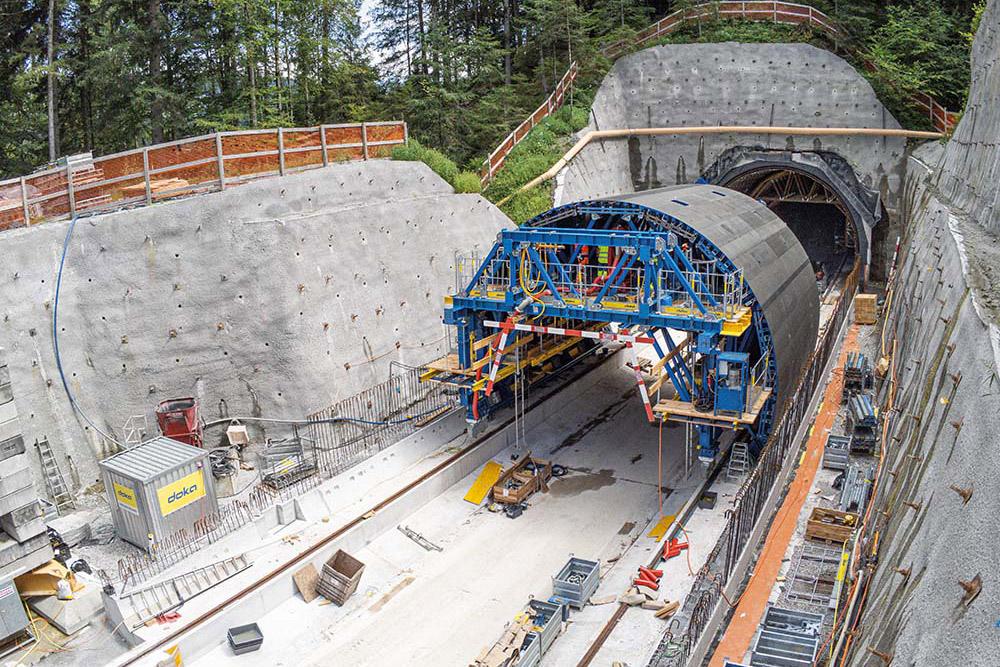 Construction is underway on a tunnel as part of a bypass to relieve traffic for communities in Toggenburg in Switzerland. For Doka’s formwork experts the conditions of this particular project have been a baptism of fire for their new, rentable Tunnel system Doka.

The Lochweidli Tunnel project in the Canton of St. Gallen is 305 metres long and principally of mining-type tunnel construction (so a good 30 blocks mostly underground) and has two portals at its entrance and exit points. The short route will be completed this year and will keep transit traffic away from the communities between Wattwil and Ebnat-Kappel as one section of a longer local bypass. While it is no Gotthard or Brenner, geologically speaking, it is also far from business as usual, as mechanical forces and human-specific factors in this specific constellation are at work for the first time.

Tunnel enthusiasts spot a niche in the market

The project is an object lesson in how people enjoy questioning established procedures and, by developing innovative solutions, help to make the world a better place.

The story in a nutshell: a few tunnel enthusiasts at Doka spot a niche in the market and develop a system which experienced its baptism of fire in the unique conditions of the Lochweidli project. It is a project that depends on short assembly times and fast cycle times. On easy cleaning of the formwork surfaces, especially under confined conditions. On generous access openings for construction traffic, on a method of construction which flexibly reflected the cross-section of the building space available.

Last but not least, on a system which is ready to go just in time, because the steel components involved were delivered completely pre-assembled from Doka’s Amstetten Pre-assembly service. Thus, on site rapid results and a sense of shared satisfaction in the great strides being made in the assembly process were achieved.

Klaus Mirna, who was Doka’s site project manager, says: “The Swiss market is fiercely competitive, anybody who wants a piece of the action must be innovative.” Therefore, for Lochweidli, Doka designed a complete solution, which alongside the tried-and-tested standard components which are indispensable for such contracts, also included a few dozen components which were specially developed for this tunnel.

The multi-tool among formwork travellers

The Doka system, which stands for Mining Tunnel, is highly versatile. It grows in accordance with the requirements of its users. It embodies the principle of function follows form – making it the multi-tool among formwork travellers. Mirna puts it like this: “I already have some building bricks in my construction set and now I have a set with new bricks, which enables the construction of precisely this kind of tunnel.” And this “construction set for grown-ups” can in large part be rented as a complete package – in the sense of a circular flow economy where ownership is no longer important and a user fee can be charged based solely on operating time and associated services.

And this is how the Doka formwork traveller moved through the tunnel on the previously-laid foundations, doing what it does best: professionally-managed formwork at a fixed price – a solution particularly suitable for straightforward projects in which light can be glimpsed at the end of the tunnel within one year. After about nine months the job was wrapped up, and the system with its accessories went back to the rental park; until somebody else reaches into the box with its “building bricks for grown-ups”. Strabag, the construction company, was pleased because the construction site was quickly cleared and they had saved themselves the expensive equipment purchase.

The fact that the Swiss were persuaded to adopt this innovative one-stop-shop model is also thanks to people like Robert Riesenberger who is based in Amstetten some 550 kilometres away; at Doka headquarters with its think tanks such as the Global Expertise Center Infrastructure (GEC) and Research and Development (R&D).

A mock-up to groove with

Riesenberger, something like the intellectual foster-father of the Doka, together with his team, has spent a lot of time developing the new system over the past two-and-a-half years. Thousands of hours of work have gone into the project. At the headquarters in Austria a mock-up was built, half as long as the later-developed full-scale formwork traveller, but still fully functional.

The engineers fine-tuned every setting, analysed all the component parts until they all worked perfectly together; until it was clear that the system design made sense and actually worked. “And so, from a collection of beams and struts emerged a modular construction set which makes it possible to create any desired shape and which can be adjusted to the most diverse cross-sections”, Riesenberger sums up, also adding: “As long as it is structurally feasible.”

Vision instead of tunnel vision

Perhaps it helped to avoid tunnel vision and to adopt a slightly wider perspective. To expand that perspective to include everything and everybody who sooner or later would be involved with the attractive rentable system. Besides existing and potential customers, this of course also included the people who would be working with it every day: Klaus Mirna and Martin Stefan from Doka Switzerland, within whose sphere of operations the tunnel project fell. Stefan Beer, Riesenberger’s colleague at the GEC, who knows the whole backstory inside out and helped to get the message across on the construction site; formwork instructor Stefan Brugger, who had the pleasure of setting up the formwork traveller on site and taking it back “off the rails” again.

The best part for all those involved, according to the people at the GEC, was watching the formwork solution grow not only in CAD format, but in the flesh, under real-life conditions and watching pencil-pushers, who are more used to working with tablet and pen, roll up their sleeves and get to work. “When you’re tightening a torque wrench to 450 newton metres until your arm hurts”, Riesenberger adds, “that’s what you call team building on-the-job.”

According to everything we are hearing from Switzerland, the effort paid off. The construction site crew were pleased with the result. The Doka engineers, dyed-in-the-wool tinkerers and researchers that they are, are already engrossed in new innovative projects. They are always on the lookout for new applications in which their “construction set” might make sense. So, something else will come up, there is still a lot out there to discover.

“As a kid I loved playing with building bricks, and that has continued into my adult life,” says project manager Riesenberger. “It’s just that now the bricks are a bit bigger.” Quite a bit bigger, we might note.