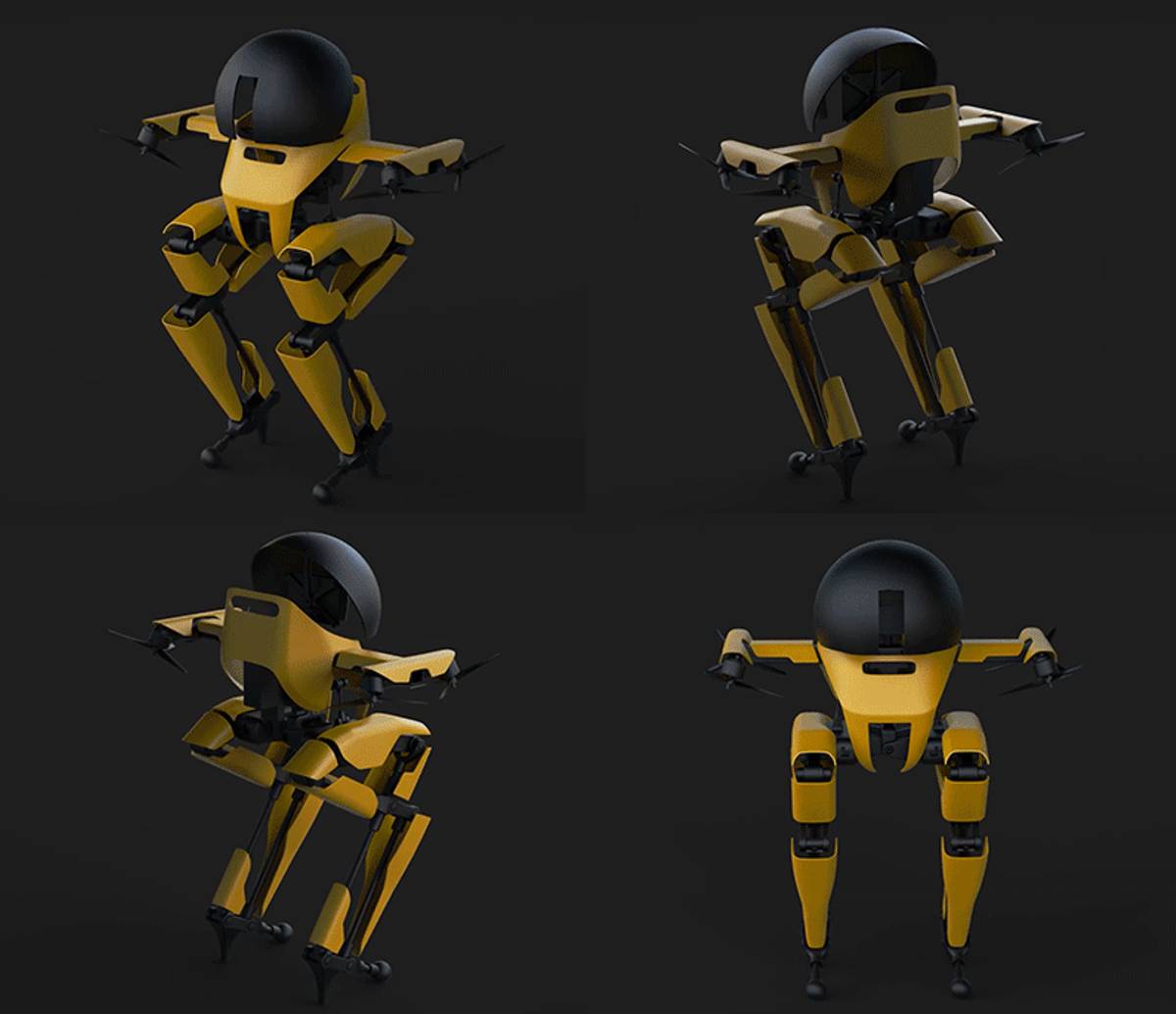 Caltech’s bipedal Leonardo is a walking and flying hybrid robot

Caltech’s bipedal Leonardo is a walking and flying hybrid robot

Researchers at Caltech have built a bipedal robot that combines walking with flying to create a new type of locomotion, making it exceptionally nimble and capable of complex movements.

Part walking robot, part flying drone, the newly developed LEONARDO (short for LEgs ONboARD drOne, or LEO for short) can walk a slackline, hop, and even ride a skateboard. Developed by a team at Caltech’s Center for Autonomous Systems and Technologies (CAST), LEO is the first robot that uses multi-joint legs and propeller-based thrusters to achieve a fine degree of control over its balance.

A paper about the LEO robot was published online on October 6 and was featured on the October 2021 cover of Science Robotics.

“We drew inspiration from nature. Think about the way birds are able to flap and hop to navigate telephone lines,” says Soon-Jo Chung, corresponding author and Bren Professor of Aerospace and Control and Dynamical Systems. “A complex yet intriguing behaviour happens as birds move between walking and flying. We wanted to understand and learn from that.”

“There is a similarity between how a human wearing a jet suit controls their legs and feet when landing or taking off and how LEO uses synchronized control of distributed propeller-based thrusters and leg joints,” Chung adds. “We wanted to study the interface of walking and flying from the dynamics and control standpoint.”

Bipedal robots are able to tackle complex real-world terrains by using the same sort of movements that humans use, like jumping or running or even climbing stairs, but they are stymied by rough terrain. Flying robots easily navigate tough terrain by simply avoiding the ground, but they face their own set of limitations: high energy consumption during flight and limited payload capacity.

“Robots with a multimodal locomotion ability are able to move through challenging environments more efficiently than traditional robots by appropriately switching between their available means of movement. In particular, LEO aims to bridge the gap between the two disparate domains of aerial and bipedal locomotion that are not typically intertwined in existing robotic systems,” says Kyunam Kim, postdoctoral researcher at Caltech and co-lead author of the Science Robotics paper.

By using a hybrid movement that is somewhere between walking and flying, the researchers get the best of both worlds in terms of locomotion. LEO’s lightweight legs take stress off of its thrusters by supporting the bulk of the weight, but because the thrusters are controlled synchronously with leg joints, LEO has uncanny balance.

“Based on the types of obstacles it needs to traverse, LEO can choose to use either walking or flying, or blend the two as needed. In addition, LEO is capable of performing unusual locomotion manoeuvres that even in humans require a mastery of balance, like walking on a slackline and skateboarding,” says Patrick Spieler, co-lead author of the Science Robotics paper and a former member of Chung’s group who is currently with the Jet Propulsion Laboratory, which is managed by Caltech for NASA.

LEO stands 2.5 feet tall and is equipped with two legs that have three actuated joints, along with four propeller thrusters mounted at an angle at the robot’s shoulders. When a person walks, they adjust the position and orientation of their legs to cause their centre of mass to move forward while the body’s balance is maintained. LEO walks in this way as well: the propellers ensure that the robot is upright as it walks, and the leg actuators change the position of the legs to move the robot’s centre of mass forward through the use of a synchronized walking and flying controller. In flight, the robot uses its propellers alone and flies like a drone.

“Because of its propellers, you can poke or prod LEO with a lot of force without actually knocking the robot over,” says Elena-Sorina Lupu (MS ’21), graduate student at Caltech and co-author of the Science Robotics paper. The LEO project was started in the summer of 2019 with the authors of the Science Robotics paper and three Caltech undergraduates who participated in the project through the Institute’s Summer Undergraduate Research Fellowship (SURF) program.

Next, the team plans to improve the performance of LEO by creating a more rigid leg design that is capable of supporting more of the robot’s weight and increasing the thrust force of the propellers. In addition, they hope to make LEO more autonomous so that the robot can understand how much of its weight is supported by legs and how much needs to be supported by propellers when walking on uneven terrain.

The researchers also plan to equip LEO with a newly developed drone landing control algorithm that utilizes deep neural networks. With a better understanding of the environment, LEO could make its own decisions about the best combination of walking, flying, or hybrid motion that it should use to move from one place to another based on what is safest and what uses the least amount of energy.

“Right now, LEO uses propellers to balance during walking, which means it uses energy fairly inefficiently. We are planning to improve the leg design to make LEO walk and balance with minimal aid of propellers,” says Lupu, who will continue working on LEO throughout her PhD program.

In the real world, the technology designed for LEO could foster the development of adaptive landing gear systems composed of controlled leg joints for aerial robots and other types of flying vehicles. The team envisions that future Mars rotorcraft could be equipped with legged landing gear so that the body balance of these aerial robots can be maintained as they land on sloped or uneven terrains, thereby reducing the risk of failure under challenging landing conditions.

The paper is titled “A bipedal walking robot that can fly, slackline, and skateboard.” Coauthors also include Alireza Ramezani, former Caltech postdoctoral scholar and currently an assistant professor at Northeastern University. This research was supported by the Caltech Gary Clinard Innovation Fund and Caltech’s Center for Autonomous Systems and Technologies.