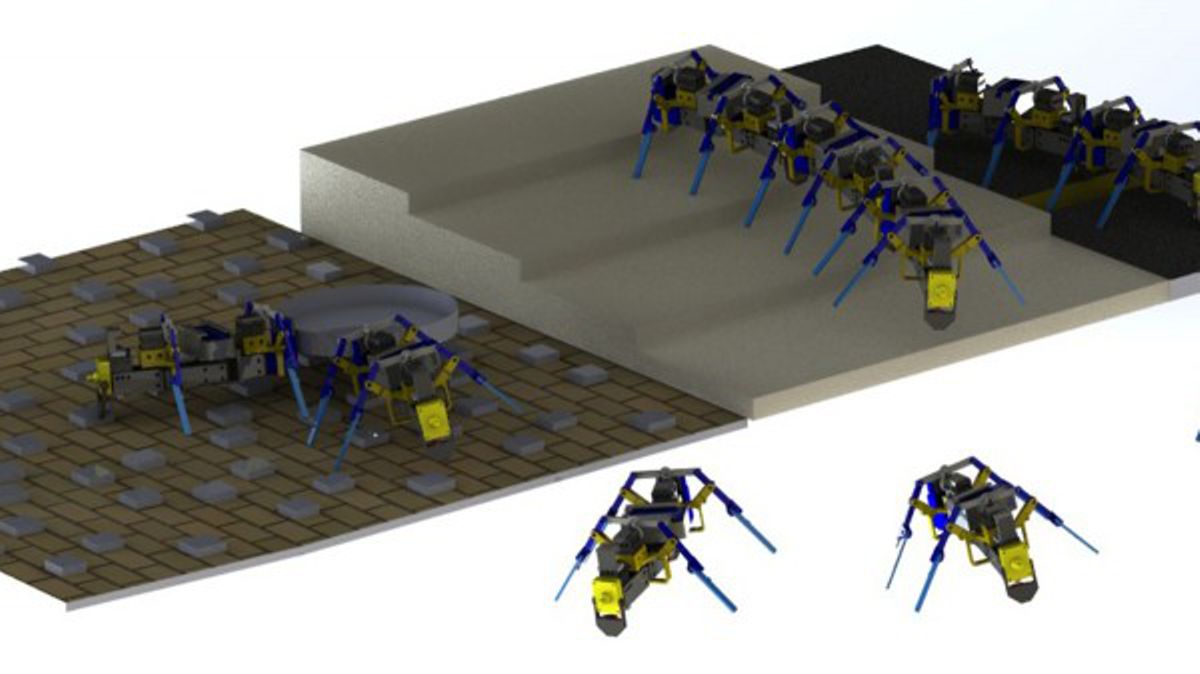 As a robotics engineer, Yasemin Ozkan-Aydin, assistant professor of electrical engineering at the University of Notre Dame, gets her inspiration from biological systems.

The collective behaviours of ants, honeybees and birds to solve problems and overcome obstacles is something researchers have developed in aerial and underwater robotics. Developing small-scale swarm robots with the capability to traverse complex terrain, however, comes with a unique set of challenges.

In research published in Science Robotics, Ozkan-Aydin presents how she was able to build multi-legged robots capable of manoeuvring in challenging environments and accomplishing difficult tasks collectively, mimicking their natural-world counterparts.

For the study, Ozkan-Aydin said, she hypothesized that a physical connection between individual robots could enhance the mobility of a terrestrial legged collective system. Individual robots performed simple or small tasks such as moving over a smooth surface or carrying a light object, but if the task was beyond the capability of the single unit, the robots physically connected to each other to form a larger multi-legged system and collectively overcome issues.

“When ants collect or transport objects, if one comes upon an obstacle, the group works collectively to overcome that obstacle. If there’s a gap in the path, for example, they will form a bridge so the other ants can travel across — and that is the inspiration for this study,” she said. “Through robotics we’re able to gain a better understanding of the dynamics and collective behaviours of these biological systems and explore how we might be able to use this kind of technology in the future.”

Using a 3D printer, Ozkan-Aydin built four-legged robots measuring 15 to 20 centimetres, or roughly 6 to 8 inches, in length. Each was equipped with a lithium polymer battery, microcontroller and three sensors — a light sensor at the front and two magnetic touch sensors at the front and back, allowing the robots to connect to one another. Four flexible legs reduced the need for additional sensors and parts and gave the robots a level of mechanical intelligence, which helped when interacting with rough or uneven terrain.

“You don’t need additional sensors to detect obstacles because the flexibility in the legs helps the robot to move right past them,” said Ozkan-Aydin. “They can test for gaps in a path, building a bridge with their bodies; move objects individually; or connect to move objects collectively in different types of environments, not dissimilar to ants.”

Ozkan-Aydin began her research for the study in early 2020, when much of the country was shut down due to the COVID-19 pandemic. After printing each robot, she built each one and conducted her experiments at home, in her yard or at the playground with her son. The robots were tested over grass, mulch, leaves and acorns. Flat-ground experiments were conducted over particle board, and she built stairs using insulation foam. The robots were also tested over shag carpeting, and rectangular wooden blocks were glued to particle board to serve as rough terrain.

When an individual unit became stuck, a signal was sent to additional robots, which linked together to provide support to successfully traverse obstacles while working collectively.

Ozkan-Aydin says there are still improvements to be made on her design. But she expects the study’s findings will inform the design of low-cost legged swarms that can adapt to unforeseen situations and perform real-world cooperative tasks such as search-and-rescue operations, collective object transport, space exploration and environmental monitoring. Her research will focus on improving the control, sensing and power capabilities of the system, which are essential for real-world locomotion and problem-solving — and she plans to use this system to explore the collective dynamics of insects such as ants and termites.

“For functional swarm systems, the battery technology needs to be improved,” she said. “We need small batteries that can provide more power, ideally lasting more than 10 hours. Otherwise, using this type of system in the real world isn’t sustainable.” Additional limitations include the need for more sensors and more powerful motors — while keeping the size of the robots small.

Daniel I. Goldman at the Georgia Institute of Technology co-authored the study.