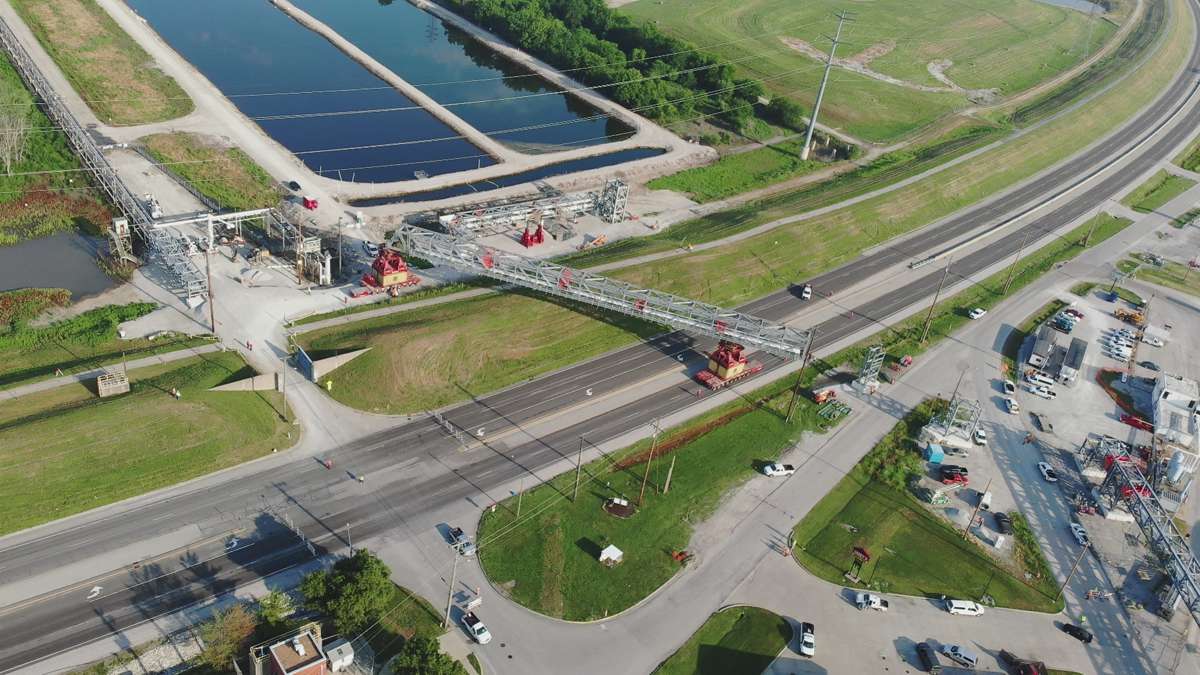 Six pipe rack modules needed to be set across various existing infrastructure including four lanes of Illinois Highway 3, the Mississippi River levee, and five railroad tracks owned by various operators all in the Hartford, Illinois region.

The customer wished to assemble all modules at lower elevations and requested that Mammoet jack the modules up to the required elevation before transport and setting.

One possible approach would be to stick build these modules in place. However, this would have required a significant amount of time and blocking of the highway and railroad tracks, resulting in substantial impact to the public as well as excessive costs. Mammoet’s method of utilizing Self-Propelled Modular Transporters (SPMTs) allowed the modules to be assembled onsite without impact to the surrounding infrastructure.

Building at a lower elevation presented safety advantages as it minimized the need for crews to work at height. To further minimize traffic and rail disruptions, transports took place during off peak hours (nights and weekends) and were safely completed within the allowable highway or railroad closure limitations.

The Unit 2 module (below), a span measuring 95 meters (314 feet) long and weighing 296 tons (653,000 lbs.), presented multiple transport challenges. It required Mammoet’s skilled operators to navigate a blind turn as the pipe rack straddled the levee, meaning the two SPMT operators were unable to see each other. 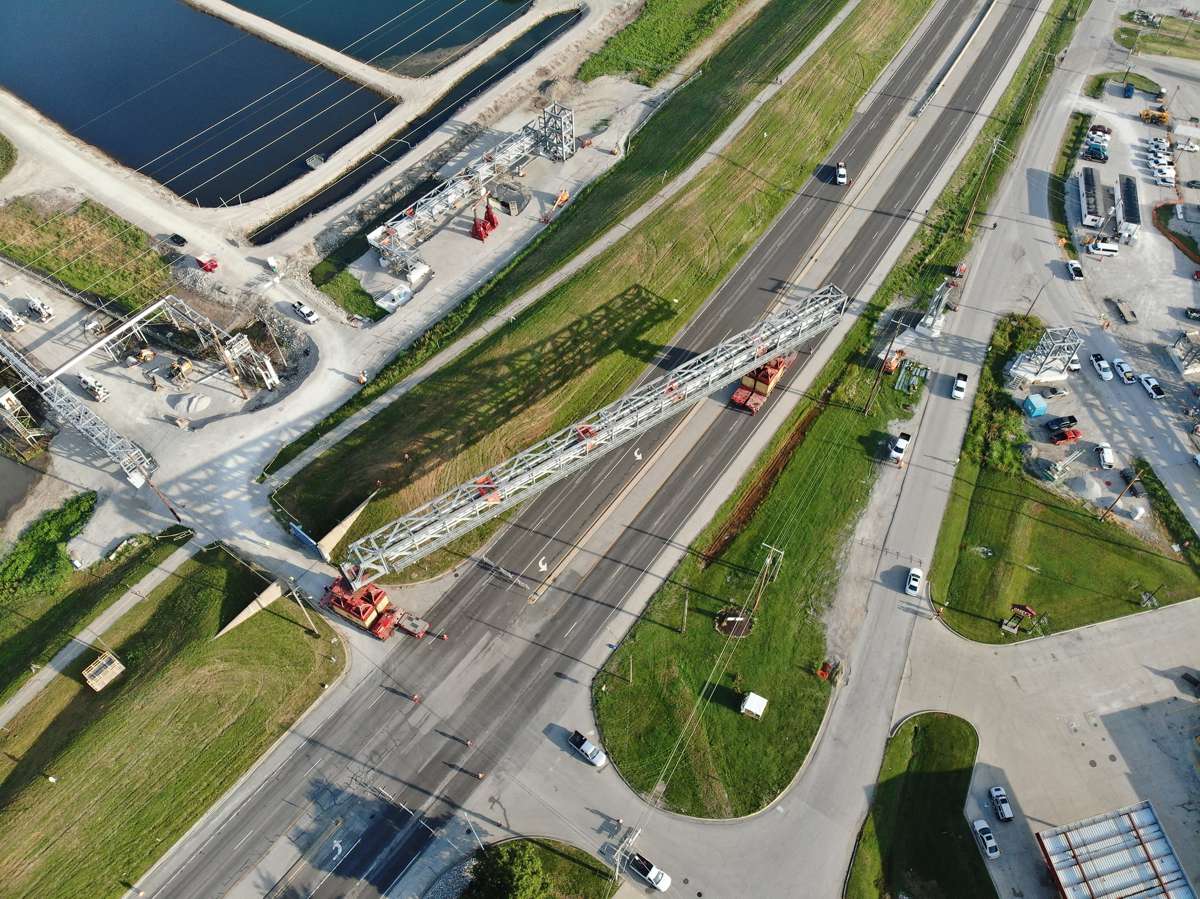 To exit the laydown yard, the trailers began in the transverse direction, then after a short transport of approximately 30 meters (100 feet) the trailers then turned 90° and traveled south down the highway where the first trailer made a 90° turn to pass through the 6m wide levee gates.

Then, with power lines and support poles interfering at the south end of the travel path, a 90° turn to the north called for the second trailer to move in reverse. As the module moved north, it approached a temporary staging position on the west side. Using hydraulic gantries to support the load, the SPMTs were repositioned to navigate the narrow travel path, allowing for final set.

Once the front trailers were repositioned, the piece was then transported the final 15 meters (50 feet) and set on supports where it spanned access roads on either side, the levee, and a divided 4-lane highway. Experienced flagging from the levee, excellent radio communication and teamwork made for a safe and successful operation.

The installation of Unit 5 also presented significant transport challenges, including negotiation past an existing substation, under high voltage power lines, and across multiple railroad lines.

There were also subsurface conditions and monitoring wells that could not be loaded, which added to the complexity of the available haul route.

The rail owners approved Mammoet to bridge the tracks with roll-on roll-off (RORO) ramps, but only allowed for a narrow window of track closure to install the ramps and execute the transport operation. As with Unit 2, the final transport required the use of hydraulic gantries to reposition both trailers prior to final set, in order to mitigate the multiple haul route interferences.

All modules were jacked up using Mammoet’s JS500 self-climbing jacking system approximately 9 meters (30 feet) from assembly elevation to set elevation.  Each pipe rack was transported at either end with double 9 axle-line SPMTs, a falsework arrangement, turntables, and 300t Mega Jack towers, which allowed for the agile movements of the trailers to follow complex transport paths riddled with obstacles.

Mammoet has extensive knowledge and expertise relating not only to civil bridge and infrastructure projects but also petrochemical works worldwide. Some recent examples include: a civil infrastructure transport in Texas, a pedestrian bridge in Colorado and the Wellsburg Bridge in West Virginia.

0 0 0
Previous : Rio Tinto acquiring Rincon Mining lithium project for $825m in Argentina
Next : Reflections and projections for Building Safety in 2021