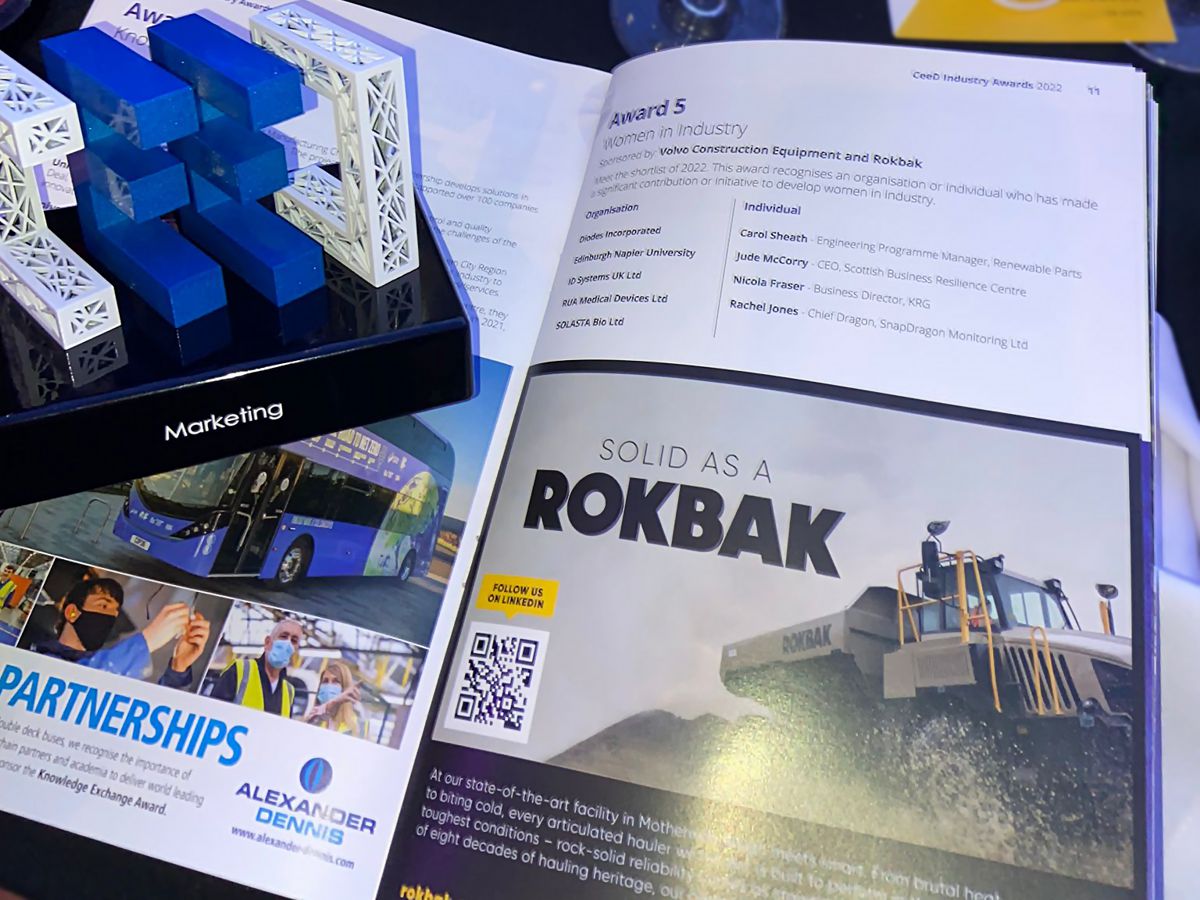 Rokbak employees are celebrating after winning two prestigious industry awards. The company bagged awards in both Marketing and the Young Person of the Year categories of the CeeD Industry Awards 2022.

CeeD is a national body that supports a range of industry sectors in Scotland, bound together by a common aspiration to improve operational efficiency, effectiveness and proﬁt through peer-to-peer knowledge exchange. CeeD’s Industry Awards Dinner, which took place last week (Thursday 24 February) at the Glasgow Hilton Hotel, in Scotland, recognised and celebrated the achievements of some of the best established and rising-star businesses and individuals in the country. 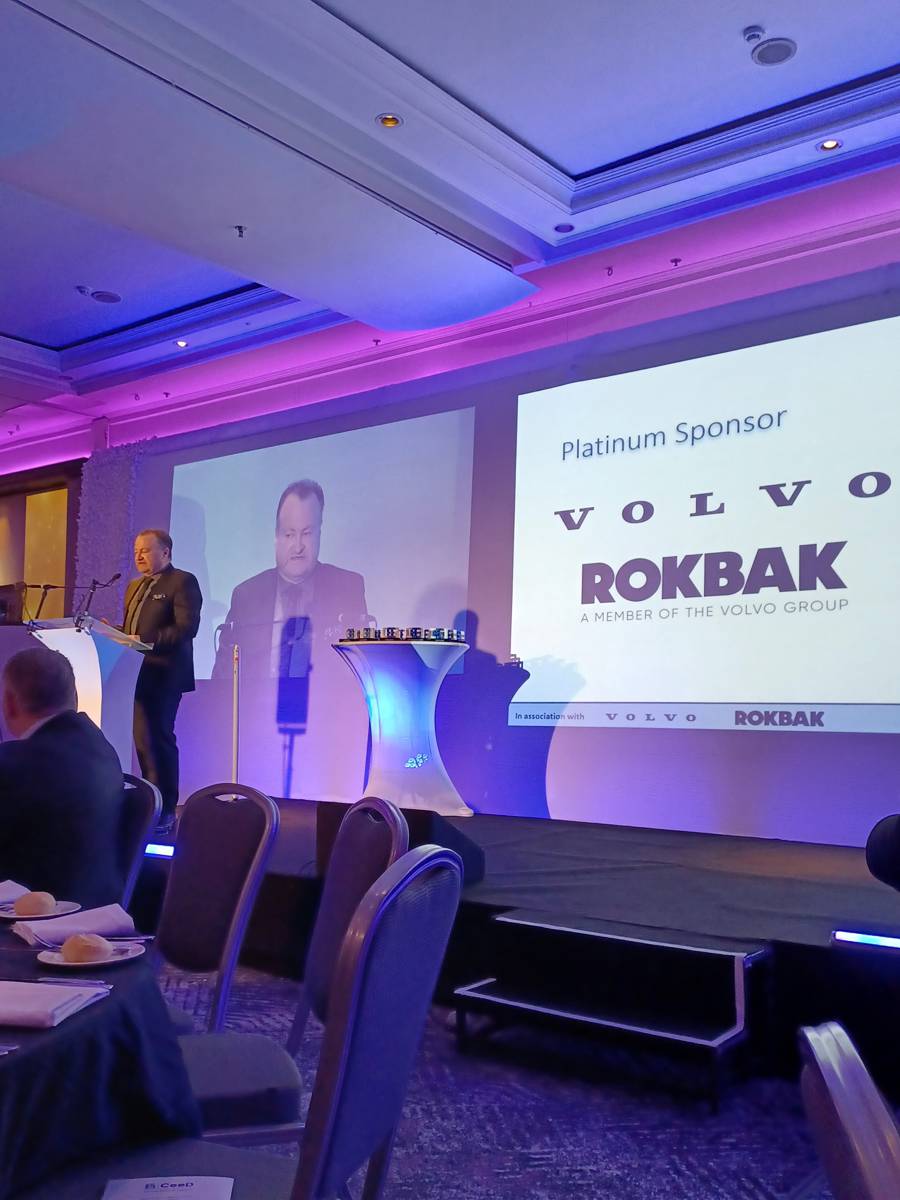 Rokbak’s entry for the Marketing category focussed on the company’s hugely successful global rebrand campaign. Judges were impressed with the passion shown by the marketing team, who working in unison with other Rokbak teams, to help devise and drive the campaign – which also included direct feedback from both dealers and customers. This ensured Rokbak and its robust RA30 and RA40 haulers received extensive coverage in the national and international trade press, as well as across social media.

“Rokbak’s rebrand campaign was of huge importance for our company,” says Paul Douglas, Managing Director, Rokbak. “The campaign had to connect to our dealers and customers, and it did so on so many levels. It really grabbed the attention of the various media streams about the reliable haulers we are manufacturing from our plant in Motherwell.

“The campaign was expertly conceived and delivered through incredible Rokbak teamwork. The project touched every area of the business and you could really feel the pride and passion from our team members. It took a significant contribution from all functions in making the rebrand so successful, and that they have now been officially acknowledged by CeeD with this award.”

Rokbak’s evening of success continued as Rhys Dingwall was announced CeeD’s Young Person of the Year.

Rhys, 19, joined Rokbak through the company’s partnership with local authority, North Lanarkshire Council and their No Limits Scheme. The initiative is linked to the Supported Employment Scheme, which matches jobseekers who have additional support needs and / or disabilities to recruiting companies.

Rhys has proven to be a real asset to the business, especially to the Paint Shop team, taking on every task with enthusiasm and enjoying the challenge of learning new skills. Since coming on board, Rhys has undertaken a range of activities – from washing trucks and valeting cabs to masking and paint finishing. Having joined the business for a fixed term of a year, it is planned that Rhys will be offered full-time employment.

“I am thrilled that Rhys has won CeeD’s Young Person of the Year award,” says Paul Tierney, HR Director, Rokbak. “Since joining Rokbak he has proven to be a real talent for the company and I know that his work is greatly appreciated by his colleagues from the Paint Shop team – Rhys has a great future ahead of him.”

Sharing Rokbak’s plaudits was also Ross Mitchell, who was shortlisted for the Young Person of the Year category. Ross, 23, joined the company in 2017 and has excelled working with the New Product Introduction teams, helping to implement quality processes and inspection documentation for Rokbak’s new haulers being distributed around the world.

Ross also manages the Customer Concerns Database and achieved internal auditor certification in both Quality and Environmental ISO standards. He has joined Rokbak’s Internal Audit team, while also continuing to study for his Engineering degree.

“I am also delighted that Ross was also recognised by the judges,” concludes Paul Douglas. “Rokbak is committed to nurturing and developing the skills and experience of young people so that they can have great careers.”

Rokbak were Headline Platinum Sponsors of the CeeD awards, as well as sponsors of the Women in Industry Award, which Paul presented to Rachel Jones, from SnapDragon Monitoring Ltd on the night.