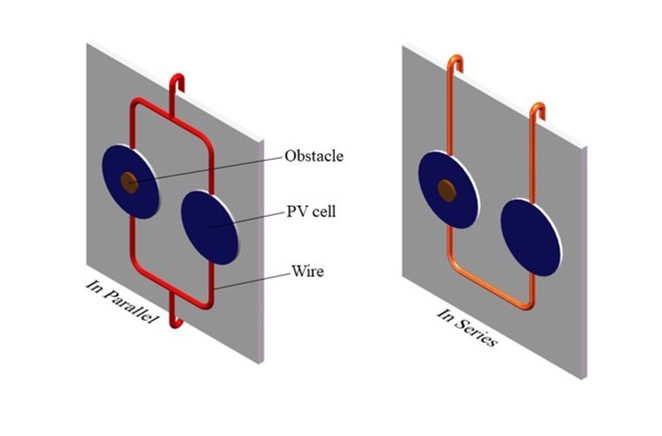 Large obstacles, like clouds and buildings, can block sunlight from reaching solar cells, but smaller sources, such as dust and leaves, can also create similar problems.

Understanding how the loss of incoming radiation affects power output is essential for optimizing photovoltaic technology, which converts light into electricity and is an important contributor to the green energy transition.

Photovoltaics connected in series create a single path with the electrons flowing from one cell into the next. In contrast, cells in parallel provide two lanes for electrons to travel through, then recombine later. In practical applications, networks of solar cells are connected in series and parallel to expand the output current and power capability.

The team found that the decrease in output current of a single cell or two cells connected in parallel was nearly identical to the ratio of shade to sunlight. However, for two cells running in series, there was excess power loss and a rise in temperature, which can cause further output degradation. For example, with 29.6% of the series photovoltaic module in the shade, the current decreased by 57.6%.

“Our study indicates that many factors, including shadow area, shadows on different cells of the module, and the connection of cells and modules, may affect the performance,” said Xie.

Previous studies have explored the consequences of shade on large photovoltaic modules but have largely ignored single cells and simple systems.

“In these complicated systems, shadows on one single cell may play vital role on the system output and reliability,” said Xie. “Therefore, studying single cells or a simple arrangement of two connected cells is necessary for solar panel development.”

In the future, the authors hope to examine the microscopic interaction behaviours and mechanisms in photovoltaic cells subjected to different shadows.

0 0 0
Previous : Air on the side of caution: HVAC for tunnels
Next : Hytera empowers road warriors with new HM6 Series DMR Mobile Radio