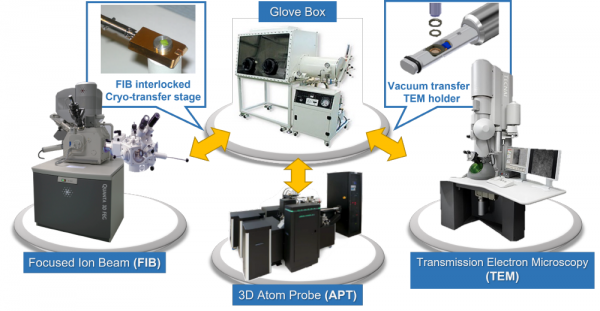 Amid global efforts towards carbon neutrality, automakers all over the world are actively engaged in research and development to convert internal combustion engine vehicles into electric vehicles.

Accordingly, competition to improve battery performance, which is at the heart of electric vehicles, is intensifying. Since their commercialization in 1991, lithium-ion batteries have held a dominant market share in most market segments, from small home appliances to electric vehicles, thanks to continuous improvement in energy density and efficiency. However, some phenomena occurring within such batteries are still not well understood, such as the expansion and deterioration of the anode material.

The Korea Institute of Science and Technology (KIST, President Seok-Jin Yoon) announced that its team led by Dr. Jae-Pyoung Ahn (Research Resources Division) and Dr. Hong-Kyu Kim (Advanced Analysis and Data Center) has succeeded in the real-time observation of the expansion and deterioration of the anode material within batteries due to the movement of lithium ions.

The performance and lifespan of lithium-ion batteries are generally known to be affected by various changes that occur in the internal electrode materials during the charging and discharging processes. However, it is, difficult to monitor such changes during operation because major battery materials, such as electrodes and electrolytes, are instantly contaminated when exposed to the air. Therefore, accurate observation and analysis of structural changes in the electrode material during lithium-ion migration is the most important factor in improving performance and safety.

Theoretically, the charging capacity of silicon is 10 times higher than that of graphite, a conventional anode material. However, the volume of silicon nanopowders quadruples during the charging process, making it difficult to ensure performance and safety. It has been hypothesized that the nanopores formed during the mixing of the constituents of silicon–graphite composites can accommodate the volume expansion of silicon during battery charging, thereby changing the battery volume.

However, the role of these nanopores has never been confirmed by direct observation with electrochemical voltage curves.

Using a self-designed battery analysis platform, The KIST research team directly observed the migration of lithium ions into the silicon–graphite composite anode during charging, and identified the practical role of the nanopores.

It was found that lithium ions migrate sequentially into the carbon, nanopores, and silicon in the silicon–graphite composite. Furthermore, the research team noted that the nano-sized pores tend to store lithium ions (fore-filling lithiation) before the lithium-silicon particles (Si lithiation), while the micro-sized pores accommodate the volume expansion of silicon as previously believed. Therefore, the research team suggests that a novel approach that appropriately distributes micro- and nano-sized pores to alleviate the volume expansion of silicon, thereby improving the safety of the material, is necessary for the design of high-capacity anode materials for lithium-ion batteries.

“Just as the James Webb Space Telescope heralds a new era in space exploration, the KIST battery analysis platform opens new horizons in material research by enabling the observation of structural changes in electric batteries,” said Dr. Ahn, head of KIST Research Resources Division. “We plan to continue the additional research necessary for driving innovations in battery material design, by observing structural changes in battery materials that are not affected by atmospheric exposure.” he said.