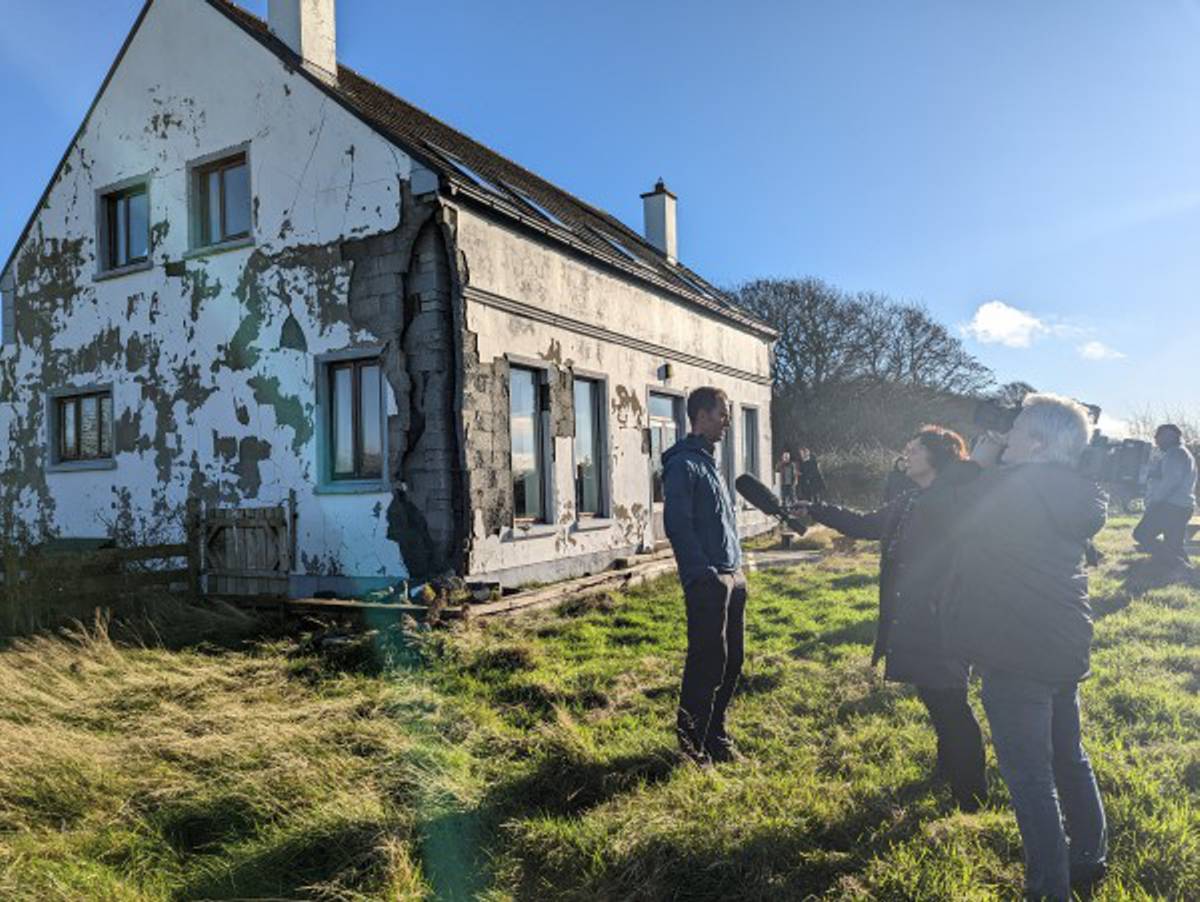 Empa researchers find the cause of brittle concrete walls

Empa researchers find the cause of brittle concrete walls

“Our houses are crumbling!” reads a banner at a demonstration in Dublin. “100% reparation,” reads T-shirts worn by participants – seen in a photo in the Nov. 15 online edition of The Irish Times.

For years, unstable concrete in Donegal County has caused massive damage to numerous homes, which a government task force has also been dealing with since April 2016. For years, there have been demonstrations, disputes in Parliament – and the cost of damage and compensation is likely to be up to three billion Euros; estimated, as of today.

The headlines on this case are now also putting Empa researchers in the spotlight. The reason: At an expert conference on this sensitive topic in Letterkenny, Ireland, on 15 November, Andreas Leemann, head of Empa’s Concrete Technology research group, gave a presentation on concrete technology. He described the results of analyses on unstable concrete carried out together with environmental researcher Paul Dunlop from Ulster University and other experts – and contradicted a hitherto widespread assumption: a high proportion of the mineral mica, according to the previous theory, makes the building material susceptible to frost damage when its pores are filled with water.

But no; the Swiss experts see the cause in another component that their Irish colleagues had not targeted thus far: Detailed examinations of concrete samples from four affected houses showed that a mineral called pyrrhotite, consisting of iron and sulfur, is present in the building material in large proportions – and apparently triggers a disastrous cascade.

When pyrrhotite in the cement paste of concrete is oxidized by oxygen, this releases sulfur, which in turn leads to the formation of ettringite. This mineral is formed anyway when cement hardens – but the additional ettringite formation leads to expansion, which eventually causes cracks in the concrete.

If more sulfur is released, the mineral thaumasite is formed. This process reduces the strength of the concrete by dissolving important constituents such as calcium silicate hydrates, and can ultimately result in disintegration of the building material.

In order to be able to clarify and prove the damage mechanisms inside this special concrete, the Empa team admittedly had to do some detective work – from conventional material analyses to complex scanning electron microscope and X-ray examinations to thermodynamic modelling. Moreover, meteorological data were used to put the common theory of frost damage caused by an excessively high mica content to the test.

The visual inspection on site had already contradicted this assumption. Typical cracks caused by cold run parallel to the walls, while in this case they only ran vertically from the surface into the walls, – often upwards from the floor up to the roof. In some cases, they had even continued downward from the top, where the influence of cold is less severe.

As it turned out, the meteorological data also clearly spoke against the cause being frost. Long and severe enough cold spells that could have triggered such damage occurred too rarely in the Atlantic-influenced climate of the region, namely only twice: from mid-December 2009 and from November 2010 onwards. Moreover, initial damage was already evident before these frost events, and in the case of the affected houses, widening of the cracks can be observed even in summer months. They can also affect interior walls that are protected from the elements.

Conclusion: Frost plays no or at best a secondary role in the concrete damage.

But why had the new explanation due to the pyrrhotite content and its consequences been overlooked before? According to Andreas Leemann, this possibility is simply not taken into account in the relevant Irish building regulation IS 465.

In contrast, the corresponding EU standard EN 12620 stipulates that any pyrrhotite content in the building materials must be taken into account in the sulfur content. “We analyzed the sulfur content of the aggregate of the concrete in samples from four houses,” Leemann told The Irish Times, “the values exceeded the permissible EU limit by a factor of 4 to 7.”

Although Empa experts examined samples from only four houses in detail, it is likely that the results can be generalized, as data from Irish engineers from nearly 100 affected houses showed that they also contain considerable amounts of pyrrhotite.

Those affected sometimes in difficult situations

The insights from Switzerland have already triggered a great response in Ireland, as reports on Irish television and radio and in newspapers such as the Irish Times show. And the topic will continue to receive a lot of attention in the future, especially since the Empa team will be investigating the concrete problem in even greater depth in a project together with international partners funded by the Geological Survey of Ireland.

Two affected people were present at the symposium in mid-November to report on their situation. One of the things that has come in for criticism from the public is the fact that an application for state compensation has so far only been possible for affected primary residences. Meanwhile, it has been announced that the most affected homeowners will receive, in a first step, up to 20,000 euros in assistance, for example, to move out and find a temporary place to stay or to store their possessions.

The Empa expert experienced what such conditions look like in real terms for those affected during his on-site investigations and documented them photographically: cracked facades, large areas of chipped plaster, completely decomposed concrete and severe mould damage. In one of the houses, they were so pronounced in the kitchen and bedrooms that the family of three has been sleeping in the living room for a long time – conditions you wouldn’t expect in Europe. “These people,” Leemann said, “are living in a ruin.”