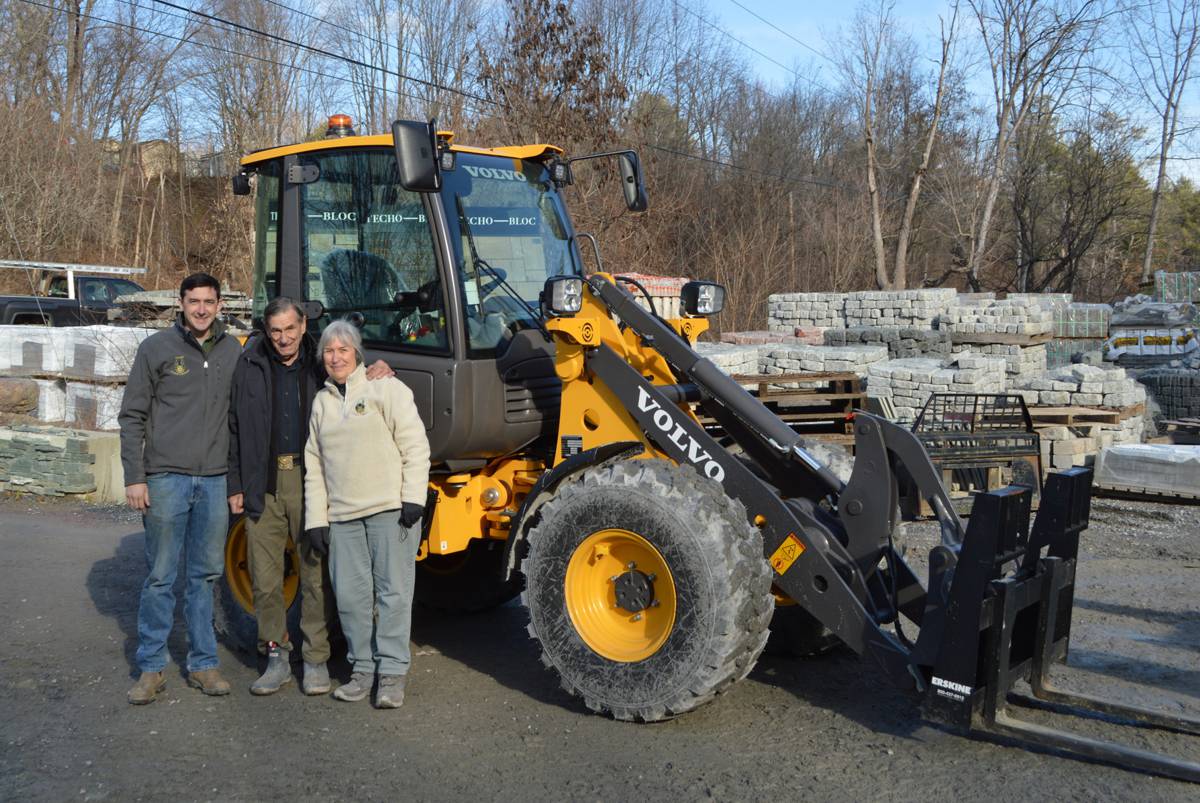 Cleary Stone has had their eye on sustainability for a long time. The Richmond, Vermont-based business provides rock products from gravel to large slabs to customers who care about the earth, so it simply makes sense.

“We work primarily with landscapers who love the earth and enjoy making it more beautiful,” said John Cleary, founder and part owner.

So when Volvo Construction Equipment announced that electric compact machines were available to order, the Cleary team was immediately interested. They told their dealer contact, Chris Palmer at Wood’s CRW, that they wanted an electric machine, and he called them as soon as an L20 Electric compact wheel loader came in.

“He went above and beyond for us to get the machine, including working with the state on funding to help us buy it,” said Cleary.

The machine was delivered in November, giving them the first fully electric wheel loader in North America.

“We are so happy that the first electric CWL went to a company like Cleary Stone, who is passionate about being a good steward of the environment,” said Stephen Roy, president of Region North America, Volvo CE. “The work they and their customers do is perfect for this machine.”

John Cleary, who is now 82, did stone work as a side job in his younger days simply because it interested him.

“People wanted the stone that I didn’t think was quite good enough to use, and it made me wonder: How much would they like the higher quality stone?” he recalled.

So he made it his full-time gig. As the business grew, he got a Volvo EC210 mid-sized excavator and became hooked on the brand.

“We used to rent another brand’s excavator and felt like we were spending a lot of time and effort filling it up with fuel,” he said. “When we switched to the Volvo, that seemed to be cut in half.”

John’s grandson, Alex Bergeron, began riding along with him in the skid steer at age 3, and as the equipment got bigger, so did Alex’s interest in the business. He is now part owner and will take over someday.

The family-owned and -operated company employs six people during their busiest times of the year.

In 2017, Cleary Stone purchased a conventional diesel version of the L20 compact wheel loader. They loved its size, maneuverability and versatility. So when an electric version hit the market, the team was excited.

“It felt like a no-brainer because we see the industry moving that direction and want to be on the forefront of that,” said Cleary.

Bergeron added that the quality of the machine itself is enough of a reason to make the switch.

“I’d say it runs smoother than the diesel, and I like how easy it is to change attachments,” said Bergeron. “Just this morning, I unloaded some pallets with a fork attachment, then switched to a bucket and loaded some crushed stone into a customer’s truck.”

The company already had some saws, a forklift and a Tesla running on electricity, so adding another outlet for charging the loader was simple and they were familiar with the charging process.

“I don’t use it for a constant eight hours, so an overnight charge is plenty,” said Bergeron. “And if I did need it all day, a lunchtime charge would be just fine.”

He also noted the instant power the electric machine provides versus the slight delay felt on a conventional machine, as well as work modes that provide just the right power for each attachment.

Working with their electric company, Green Mountain Power, and Palmer at CRW, Cleary Stone was able to subsidize some of the purchase price of their new L20 Electric.

“The original amount they wanted to give us was not huge, but once Chris demonstrated to them how much power we’d utilize they increased their offer,” said Bergeron.

Wood’s CRW Corporation is a family-owned company that started in Burlington in 1961.

Other local and state jurisdictions offer incentives as well, and those interested in learning more are encouraged to learn more here.

As alternatively powered equipment grows in availability and popularity, Cleary Stone is thrilled to be leading the way.

“There will be more and more options, and we are fortunate to be in the right place at the right time,” said Cleary.

“Our customers think it’s super cool too,” added Bergeron. “We’re hopeful more of these kinds of machines are sold so the growth and development continue. We’d like to make those upgrades wherever we can.”

Volvo CE is the industry leader in alternative power research and development among construction equipment manufacturers. They currently offer five compact electric machines (excavators and wheel loaders) with additional sizes and machines in development. The company also has a hydrogen fuel cell test lab in Sweden and is working to make that technology more scalable.