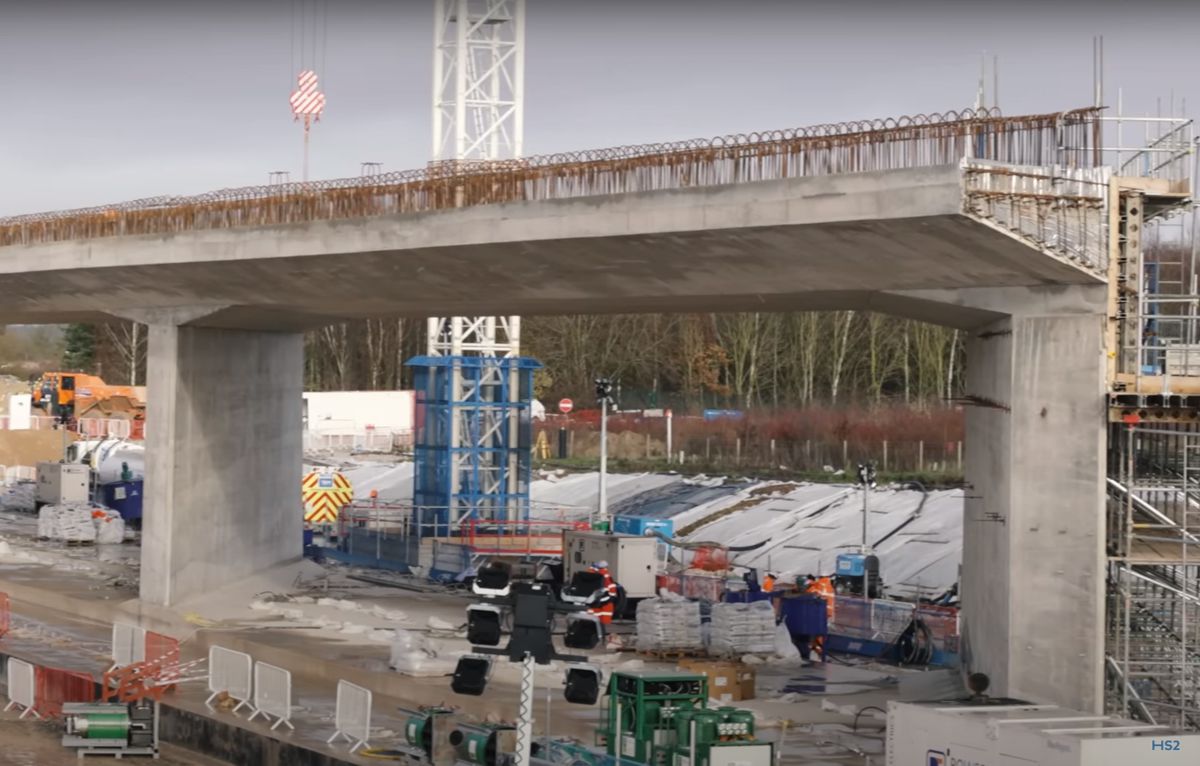 Balfour Beatty VINCI has celebrated a world-first as around 450 of its people slid a 12,600 tonne bridge required for HS2, a record 165 metres to position it across a motorway in Warwickshire.

The site team worked around the clock to move HS2’s Marston Box bridge into place over the M42 during the Christmas period. The dramatic operation took 48 hours, at a speed of 4 metres per hour, from Saturday 24 to Monday 26 December during a 10-day closure of the motorway between Junctions J9 and J10 (northbound and southbound). The motorway is on schedule to reopen at 0500 on Tuesday, 3 January 2023.

“We’ve used innovative construction techniques and worked tirelessly throughout the Christmas period to move this 12,600-tonne bridge over the M42 motorway – all done with the aim of keeping disruption to an absolute minimum.”

Over the past six months, the giant 86-metre-long structure was constructed on land next to the motorway. The structure, developed by a Design Joint Venture of Mott MacDonald and SYSTRA, working on behalf of Balfour Beatty VINCI, has a base, three walls and top slab.

The sliding mechanism, designed by specialist civil and structural engineering company Freyssinet, allowed the box to be pushed into place over the motorway on a guiding raft over a distance of 165 metres – which is believed to be the world’s longest box slide.

On completion, the whole structure will total around 190 metres in length and will carry HS2 over the motorway as it heads north to Crewe, or on its southward journey as it loops into Birmingham Curzon Street or continues straight on to Interchange Station in Solihull, Old Oak Common Station and London Euston.

Once built, the railway bridge will connect to Dunton Wood Embankment to the south and the Birmingham and Fazeley Canal Viaduct, which crosses the heritage canal, to the north.

This construction method, which allowed it to be moved into place in one movement meant only two one-week closures of the motorway over a 12-month period, dramatically reducing disruption for road users.

HS2 Ltd’s Civils Delivery Director, Mike Lyons said: “This is the first box slide of its kind over a motorway in the UK, and we believe it’s also the world’s longest slide, so it’s a great achievement for HS2 as we quickly approach peak construction.

“It’s fantastic to celebrate another big milestone for a project that is already providing work for almost 30,000 people today, and in the future, it will encourage people to use zero carbon public transport.”

Rail Minister Huw Merriman said: “This is yet another astonishing achievement by HS2 – a project which is already changing lives through employment and regeneration and will completely transform the way we live and work once trains hit the tracks.

“Thank you to the 450 people working over the Christmas period on this incredible operation, who are playing their part in bringing this pioneering project to life. What a way to end the year.”

The box slide operation is part of HS2’s 550,000 square metre site at Kingsbury, where over 1,000 people are currently working. Around 6,800 people are already employed in HS2’s construction in the West Midlands, with thousands more jobs supported through the wider supply chain.

HS2 and Balfour Beatty VINCI has worked in partnership with National Highways to deliver this intricate operation.

National Highways Senior Network Planner, Frank Bird said: “We’d like to say a big thank-you to motorists for their patience during the closure of the M42. It’s never easy to close a busy motorway such as the M42 for an extended period of time but it has been vital to ensure the safety of the workforce and motorists while this work is taking place.

“We’ve been working collaboratively with HS2 for the past 18 months to ensure the operation ran smoothly and to help keep disruption to a minimum for drivers. The installation of the new Marston Box bridge is a significant milestone in the HS2 project and it’s great to see it finally in place.”