Due to it reaching the end of its natural lifespan, the Connecticut Department of Transport (DoT) needed to replace I-95 bridgework that had stood since 1958. At the same time, it needed to ensure this crucial civil work had the minimum possible impact on local residents.

Taking advantage of ALE’s expertise, two bridge superstructures, weighing 726t (800 US tons) and 817t (900 US tons), could be constructed at the roadside over a number of months, then transported the final few metres only at the time of installation. This allowed the job to be completed using just two weekend closures.

The bridges form the intersection of highway i-95 and highway 1 in Stamford, Connecticut, USA. ALE’s scope was to position both new bridge sections, following on from work by the client to demolish the old bridge sections in-situ.

The bridges were built at the installation height of 7,320mm (24 ft) by the client within the infield area of the northbound onramp. During early May, ALE mobilised both its SPMT equipment and specific falsework required for the job.

To ensure the bridge girders were evenly loaded during the move, ALE imported high-capacity modular beams from its research & development centre in Europe. These were installed on top of the SPMTs, forming much of the falsework required for the job.

On June 1st the first bridge installation took place, taking a total of just 6 hours. The following weekend, the second section of bridge was installed. This required reconfiguration of the falsework, as the elevations of each bridge section differed.

Both bridges were approximately 24m wide and 64m long (80 x 210 ft), took the shape of a parallelogram and were installed on a slope. They also had been designed with strict support points very close to either end, further increasing the need for millimetre-accuracy in each lift. 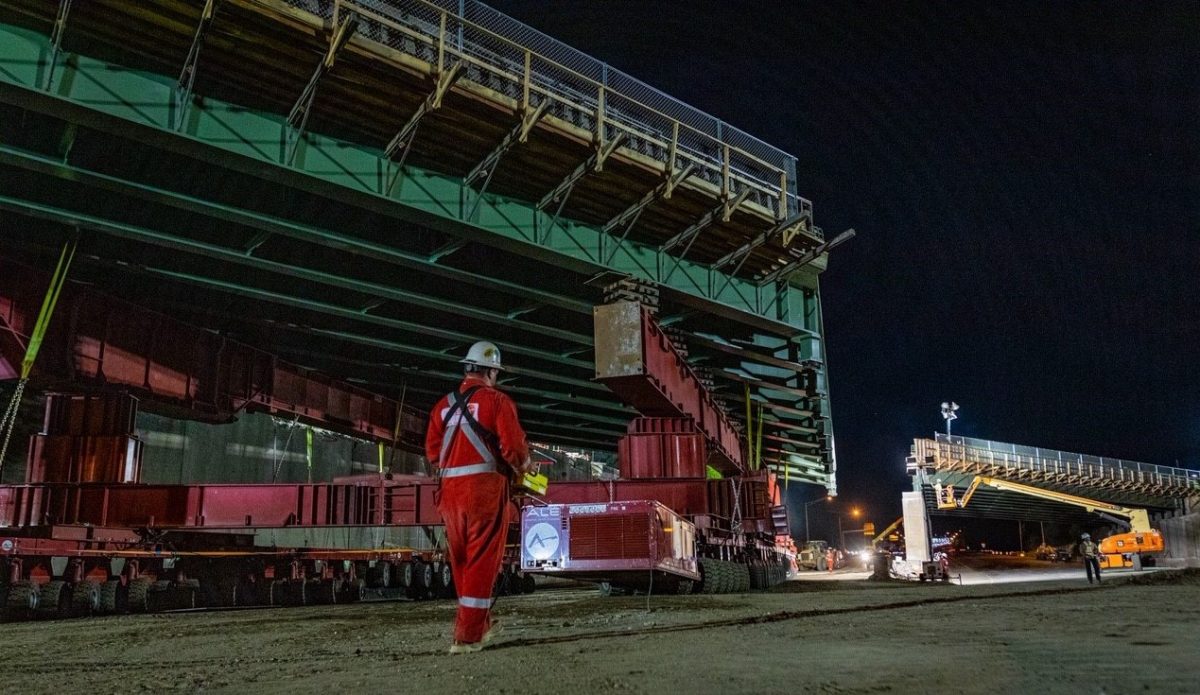 Throughout the planning and execution stages of the project, ALE liaised with the Connecticut DoT, and with local third-party engineering companies to ensure all required documentation was in place.

During each lift the bridges were supported by 56 axle lines of SPMT, in combination with around 280t (308 US tons) of steelwork and high-capacity modular beams. This equipment was positioned throughout the lift exactly in line with each of the structures’ two bases.

This work allowed the Connecticut DoT to restore normal traffic flow as planned – in fact, on both weekends the route was re-opened a full day ahead of schedule. The bridge is now providing a key transport link serving approximately 150,000 vehicles daily.

0 0 0
Previous : How autonomous are Autonomous Vehicles?
Next : Besblock ends up sponsoring disabled cricket team thanks to a chance haircut