Siltbuster has designed and mobilised one of the UK’s largest ever temporary modular water treatment solutions, in just two weeks, to assist JN Bentley during essential maintenance work on the Castell Nos Reservoir infrastructure in South Wales, as part of a resilience project for Welsh Water.

During the maintenance work, JN Bentley needed to carry out a drain down of the reservoir. This meant that an alternative raw water supply was required from a neighbouring reservoir in order to ensure an undisrupted supply of water was provided to Welsh Water customers. In addition, work had to be completed in a tight time frame due to strict constraints set by Natural Resources Wales due to the imminent return of migratory salmon to spawn in the river in which the treated waters were to be discharged into.

However, the water main, which connected the potable water treatment works with the alternative source, had been dormant for over 10 years and itself needed rehabilitation. Before it could be used, the main needed a high velocity pipe flush to ensure the removal of any residual sediments, which had accumulated during its inactivity. JN Bentley engineers specified that the pipeline needed to be flushed at a flow rate of 750m3/hr for a minimum of six hours, to ensure the sediments were removed and the raw water treatment process at the works was protected. 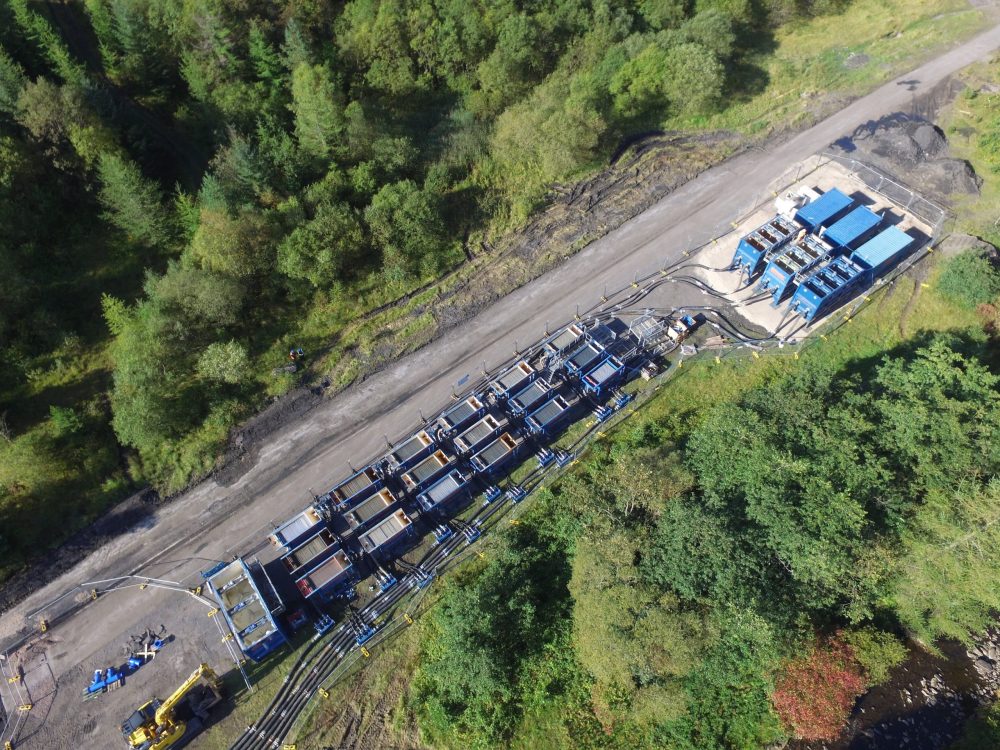 Siltbuster was selected for the project because it was the only company that could have provided a water treatment solution to remove the suspended solids from such a large volume of flush water before it was discharged to the watercourse, and handle such an exceptionally high flow rate.

Prior to choosing Siltbuster, the design teams at JN Bentley considered other plans of action.  The primary factors dictating the decision-making were, the remote rural location, restricted access which included public rights of way, neighbouring rural villages and towns, and sensitive environmental constraints.

Tankering was considered socially and environmentally unsustainable, primarily due to the implications of running more than 280 tankers into this remote area of Wales. On top of this, the cost of this type of off-site disposal was prohibitive, with each tanker costing around £1,000.

Temporary settlement lagoons were ruled out as they would need to be extremely large if they were to provide a sufficient and effective settlement area to successfully remove the anticipated slow settling solids from the volume of water. Open lagoons were also considered a potential risk given the public right of way which went right through the site. 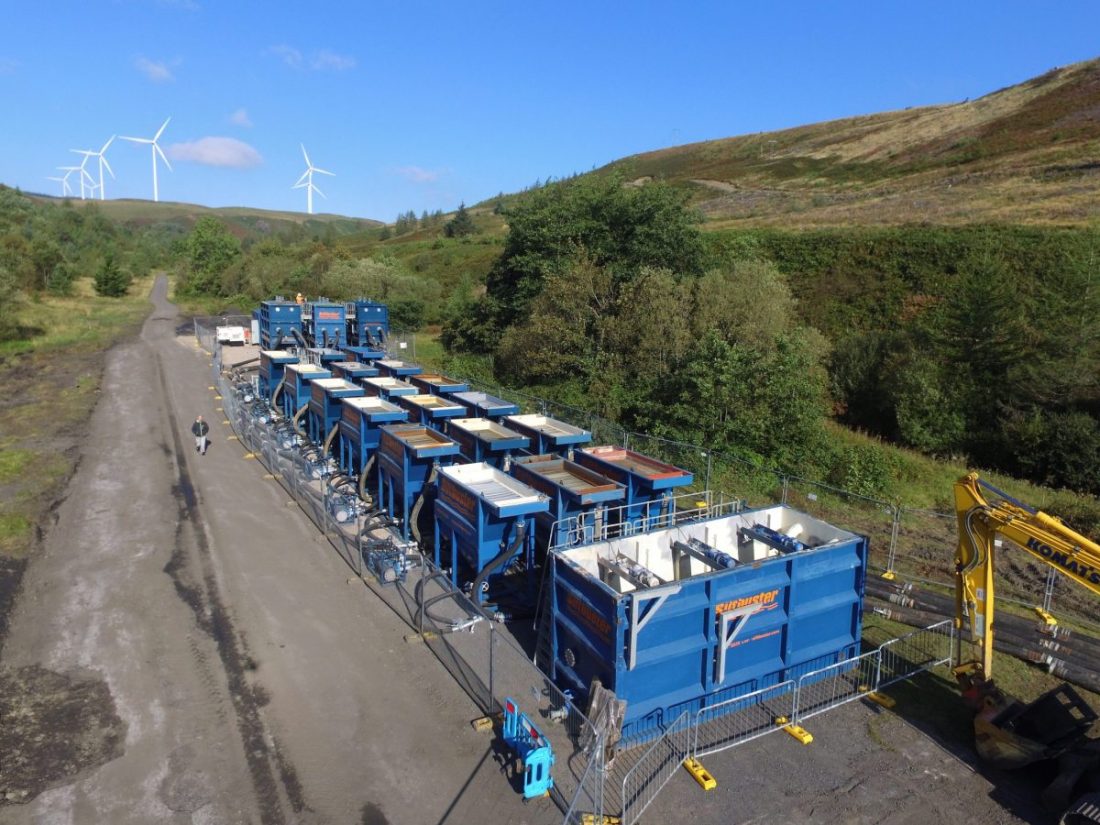 Following a site consultation, Siltbuster’s team of experienced technical engineers designed a solution, selecting from the company’s hire fleet, which is the largest in the UK. This solution comprised of three containerised dosing units, three 30m3 multistage reaction tanks, 18 HB50 Clarifiers and a 30m3 sludge storage tank with associated pipework.

It took only 22 lorry movements to get this enormous treatment chain to site – a stark contrast to the 280 lorry movements which tankering would have required.  Furthermore the Siltbuster system was on site and operating within two weeks, meeting the tight deadline set by Natural Resources Wales.

Siltbuster’s unique system was fitted with inlet monitoring telemetry which enabled the control of chemical dosing. The addition of chemicals could be automatically suspended when infeed waters were recorded below the target discharge levels; preventing any unnecessary dosing of chemicals and bringing cost savings to the scheme.  Monitoring systems were also fitted at the end of the treatment chain so the performance could be reviewed, giving major stakeholders the proof and reassurance that the discharge criteria were being met.

The data being recorded by both the infeed and discharge monitoring was easily accessible 24/7 using Siltbuster’s newly launched Clarity reporting system, which gives clients real time data at their fingertips via a web portal. 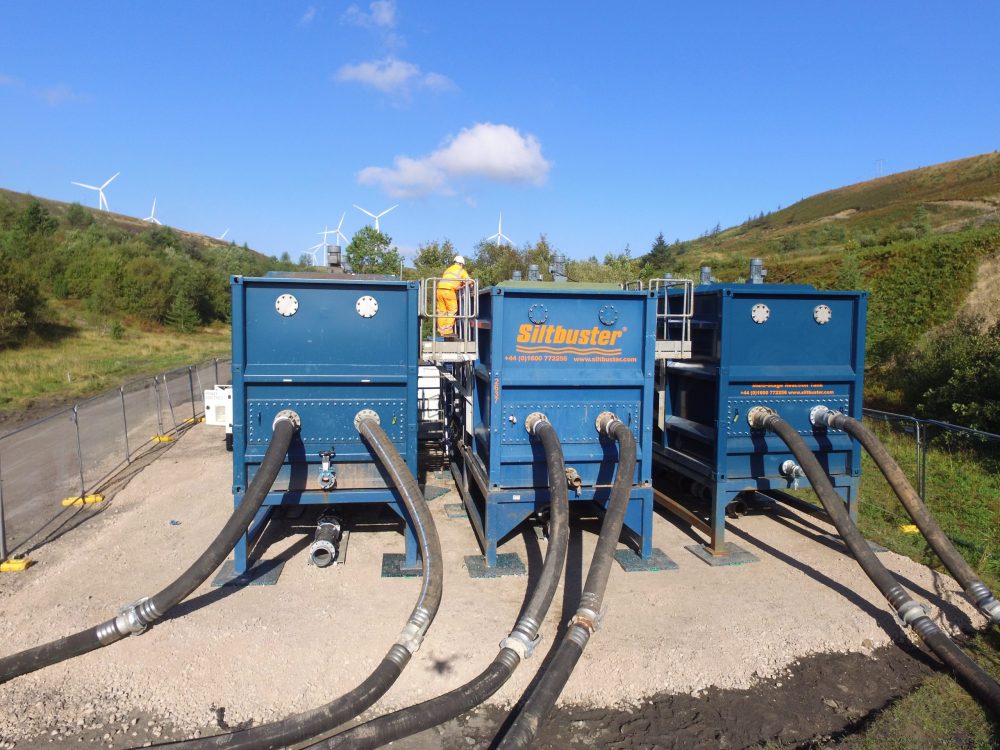 Tristan Hughes, Construction Sales Manager at Siltbuster, said: “Where other companies would struggle, the range and size of readily deployable hire equipment and technical expertise we have within the company, combined with the proven history of completing similar projects for Severn Trent, enabled us to tackle this huge undertaking with confidence and within the tight window outlined by Natural Resources Wales. I am confident the pedigree that is associated with Siltbuster was one of the main reasons JN Bentley sought our professional input into this Welsh Water resilience project”.

James Stanley Ball, Works Manager at JN Bentley, concludes: “This was a challenging project, but Siltbuster was professional from the initial delivery of its documents through to the actual implementation of the system on site. As far as we are concerned, finding an organisation that was not only able to work to extremely tight deadlines and create a bespoke system to fit our exact needs, but also cope with such unusually high flow rates, was a dream come true. Everything it introduced worked better than expected, making our lives easier on site.”