Photo Credit To The Transtec Group

Pavement engineering firm The Transtec Group was hired by RS&H to perform an evaluation of airfield pavements at Austin Bergstrom International Airport (ABIA) in Austin, Texas. RS&H, a national architecture, engineering and consulting firm, was interested in using Rolling Dynamic Deflectometer (RDD) testing to enhance the traditional pavement evaluation and knew Transtec had extensive experience with evaluating and interpreting data from the RDD.

During the evaluation, concerns regarding the performance of one particular runway—17L/35R—were brought to Transtec’s attention. The runway was experiencing distress in the touchdown areas earlier than ABIA anticipated. It was determined that a more detailed evaluation on the runway pavement was necessary to determine the potential impacts, limits, and appropriate course of action. 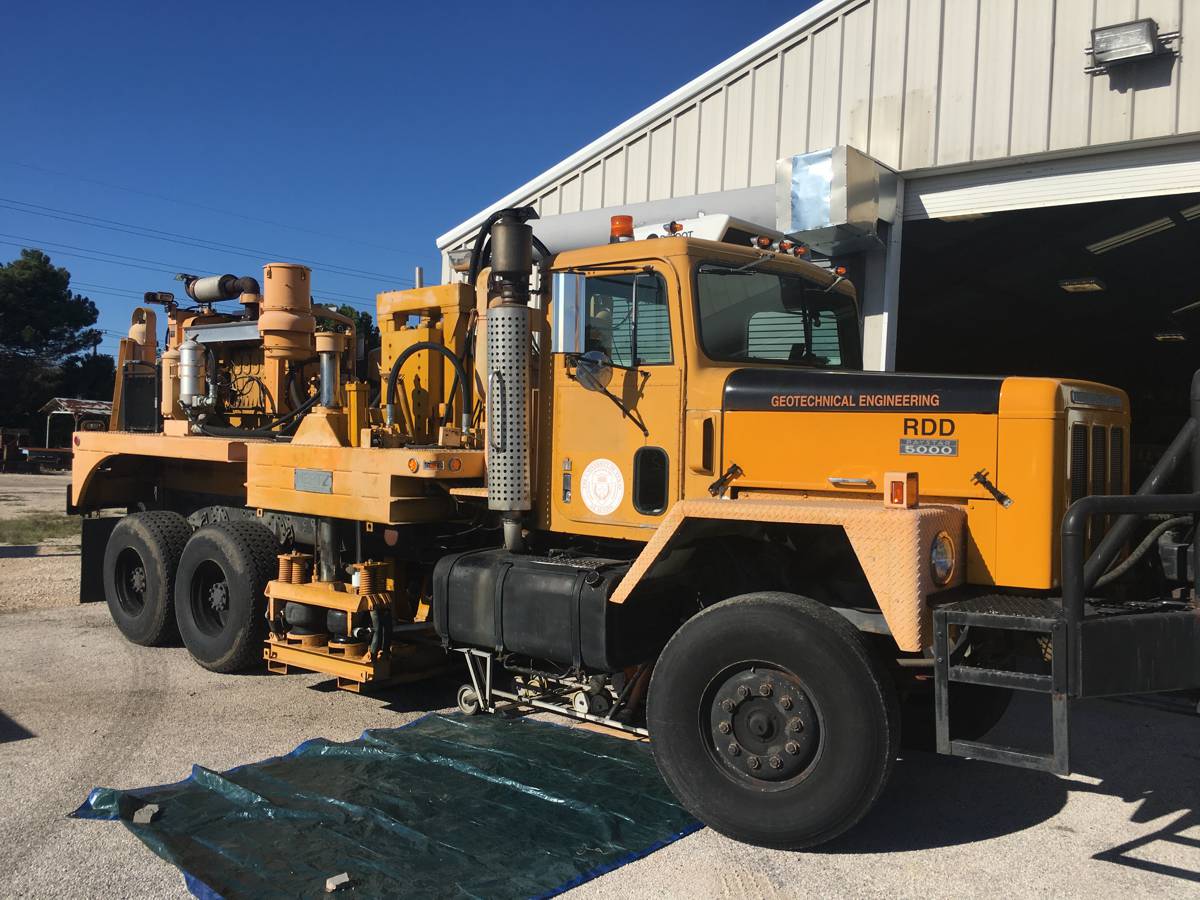 Non-destructive test (NDT) equipment can be used to evaluate pavements by measuring the pavement response (deflection) to specified loading conditions.  The resulting data helps owners understand how their pavement is performing given the current or future loading.  With this information, owners can better strategize their expenditures to balance costs and pavement performance. For this project, two methods were selected to perform deflection testing and assess pavement structural integrity; Heavy Falling Weight Deflectometer (HWD) and RDD testing.

The HWD measures pavement deflections at discreate locations, typically every 50 to 250 feet, depending on the project requirements and available budget.  The HWD works by dropping a weight on to a loading plate, thus applying a transient force on the pavement.  Sensors spaced at set intervals then measure the pavement response, or deflection.  The HWD enables users to identify differences in pavement response, however, the discrete testing makes it impossible to define where changes occur and it may miss other localized issues between test locations.  For this it would be necessary to increase the testing frequency, thus increasing costs and duration.  At many airports the duration of testing is critical factor, so any technology that can reduce disruption to operations can be a cost saving benefit.

To address this limitation, the RDD was selected to support the HWD testing.  The RDD collects deflection measurements continuously and while constantly moving.  This allows for a higher resolution to the data (more data points in less time), allowing users easily pinpoint exact locations where support conditions change.

The RDD is a mobile, truck-mounted device that was developed at the University of Texas Austin and performs continuous deflection testing of pavement systems. The RDD generates and measures large dynamic forces, which are applied to the pavement through loading rollers, as the truck moves along the pavement.  The deflections induced by the dynamic loads are measured with multiple, specially designed rolling sensors.  These measured deflections are indicators of the mechanical properties of the pavement system. 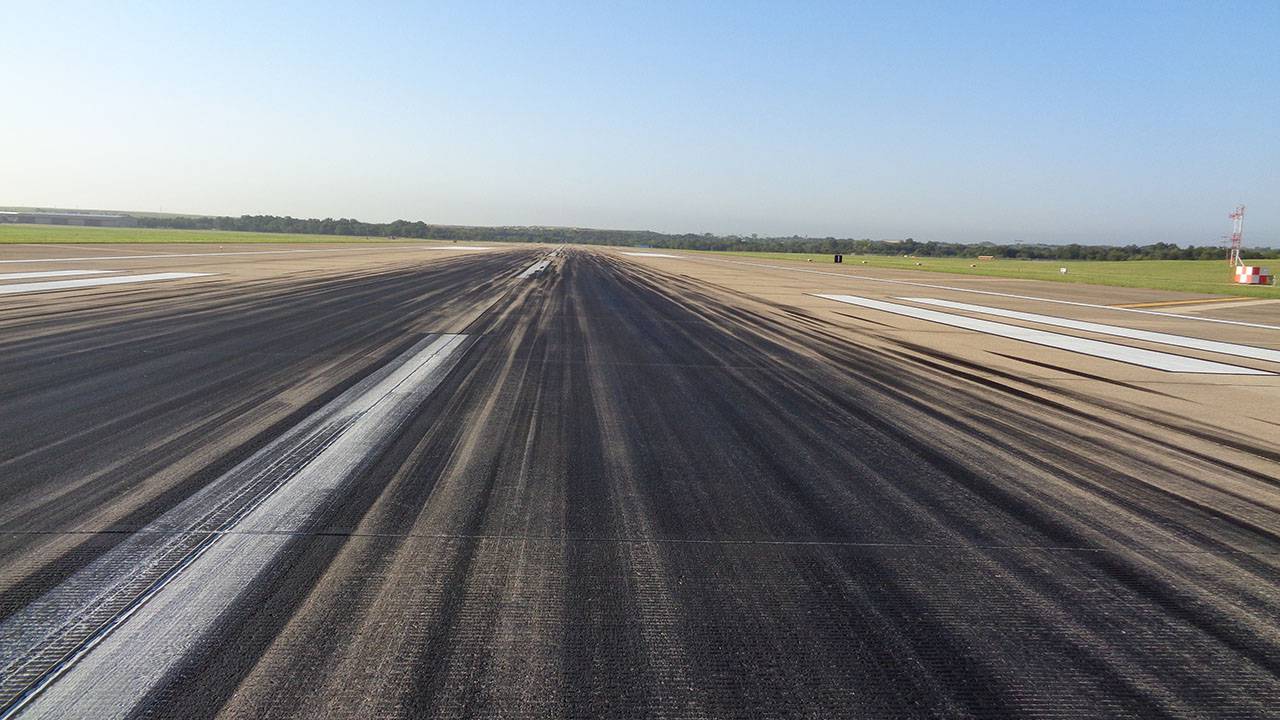 Using the RDD allows users to:

The RDD is complemented by conducting HWD testing. The RDD can be used to identify areas where additional discrete testing using an HWD is needed.  The results from the discrete HWD testing can then be used to assess the remaining life and support conditions for specified loading and determine pavement classification numbers (PCN).

Transtec used the RDD to provide continuous and detailed deflection data for runway pavements tested at ABIA. The data was then used to help select specific HWD test locations for a more detailed analysis. One of the key reasons for selecting the RDD was to reduce the number of test locations required by the HWD, while increasing the amount of data obtained and providing a much clearer and more detailed picture of the actual structural condition of the pavement.  This was especially important in the evaluation of Runway 17L/35R as the goal was to determine the limits of possible rehabilitation.

A large volume of RDD data was collected for each runway, taxiway, the maintenance ramp, and a section of the general aviation apron.  The data was evaluated at a deeper level on Runway 17L/35R due to the concerns of localized pavement distress.  The RDD data helped identify differences in deflection response related to various construction futures, such as fills and cuts, drainage structures, and differences in pavement structural selections.  Identification of these features is useful for conducting future structural evaluations, interpretation of results, and planning for pavement maintenance and rehabilitation.

The deflection profiles collected were processed and converted to shapefiles for viewing in ArcGIS Pro. These profiles, along with high-resolution aerial imagery, joint layout diagrams, and other useful information, provided valuable insights into the pavement condition and were used to aid in the selection of HWD testing areas.  The following figure shows an example of the continuous data along Runway 17L/35R.  The individual peaks represent the higher deflections along the pavement joints.

The process of selecting the HWD test locations included conducting statistical distribution of data points, identifying trends, differentiating mid-slab deflections from joint deflections, and using 3D renderings (such as above) to select critical locations.  During this process, the initial focus was on areas showing high deflections. This data was then cross-checked against other outside information, including previous repair plans (to know which panels were previously replaced), the pavement condition survey, and other limited historical information.

The above figure provides an example of how the data was evaluated in GIS and includes an overlay of pavement condition data sample units (colour coded red to green), mid panel deflections from the RDD (bars), joint locations, and previous panel repairs (hatched boxes). The data was filtered to show where the deflections were higher than the baseline average.  The continuous data available from the RDD shows that additional panels should be replaced that were not originally replaced and that some of the repaired areas may not be performing adequately.

To provide an initial verification of the structural support of the pavement, additional life analysis was conducted using FAARFIELD. FAARFIELD is an airport pavement design and evaluation software developed by the Federal Aviation Administration (FAA).  The main inputs in the analysis included the airplane fleet mix, modulus values for the various pavement layers, and the as-built thickness. The results of the analysis confirmed that the majority of the pavement was structurally sound, but there were isolated areas in which the pavement needed some form of rehabilitation or maintenance.

The primary focus of the evaluation was to provide baseline data to be incorporated into the airport’s PMP and to help with planning and budgeting of future maintenance and rehabilitation activities.  The continuous deflection data from the RDD allows for a quick comparison of the performance of the various surfaces measured.

Supplemental analysis was conducted on Runway 17L/35R due to the premature distress and concerns over the pavement performance.  Transtec’s testing and analysis of the data collected with the RDD determined that the overall condition of runway 17L/35R was in good condition and there were not significant deficiencies in the overall pavement structural condition.  As a result, the data showed that the need for complete rehabilitation was not required.

However, the findings did verify that there were isolated areas experiencing accelerated distress and that those areas would need to be reconstructed.  The continuous nature of the deflection data allowed Transtec to pinpoint the areas that were performing the worst and find the exact limits of the zones needing repair. The team eliminated the need to reconstruct the entire runway and instead focus on areas showing higher distress, saving the airport millions of dollars in reconstruction costs.

The data gathered by the RDD will continue to be useful as ABIA develops and monitors its PMP. Airports that measure deflections on a routine basis as a part of their pavement management system (PMS) will be able to monitor trends in the pavement performance and condition, which will help identify the rate of deterioration. They will be able to better predict with a high level of certainty when they will need to intervene on their pavement to rehabilitate and avoid requiring a major, costly reconstruction.