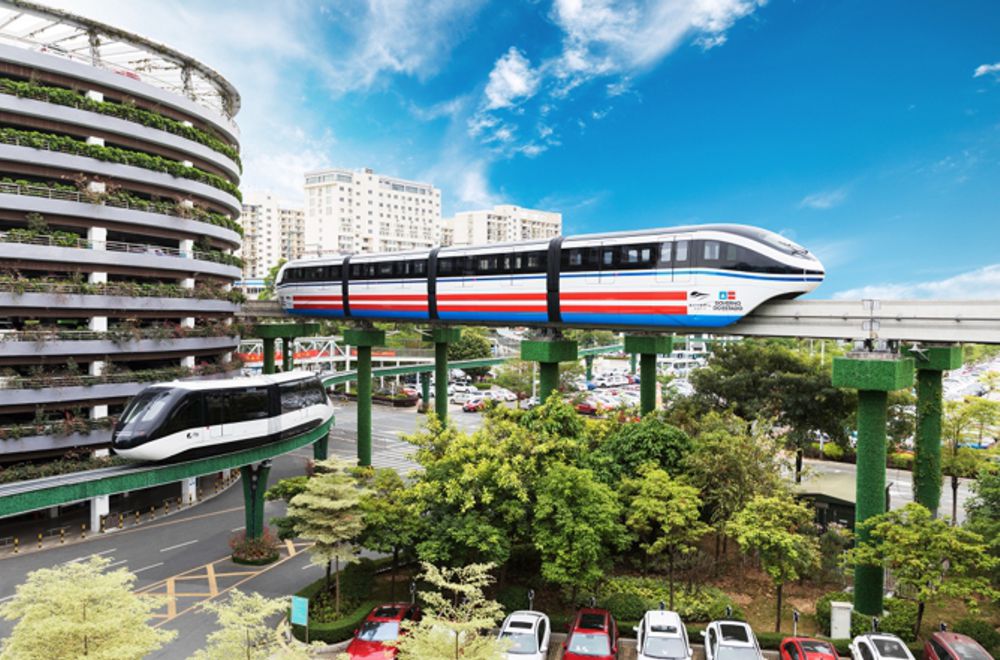 On the 8th of April, BYD ushered in a new milestone, as its Bahia SkyRail vehicle rolled off the production line in Shenzhen. The Bahia SkyRail, located in the city of Salvador, Bahia State, Brazil, is the world’s first SkyRail line to be partially built above the sea.

Satisfied with the performance of the new model, Governor Rui Costa insisted that the VLT do Subúrbio symbolizes an important international partnership for the modernization of urban transport. “After placing Bahia as the second metro extension in Brazil, we now take a large step towards modernization with this modern vehicle that will replace a train that no longer met operating conditions,” commented Rui Costa.

Stella Li, Executive Vice President of BYD Company Limited & President of BYD Motors Inc., said, “Today’s vehicles are specially tailored to the unique geographical and cultural environment of Salvador, the smooth and comfortable ride, humanized and intelligent design will bring passengers a more pleasant and convenient green travel experience. Brazil has embraced BYD’s green, zero-emission transport offerings across the board, including pure electric buses, trucks, taxis and the SkyRail, making the country the leading model for eco-friendly transport in Latin America. In the future, BYD will continue to work hard with its leading new energy technology and high-quality rail transit offerings to help cities around the world build low-carbon transportation and achieve sustainable development!”

The Bahia SkyRail has been specially customized to meet local regulations and needs, as the world’s first SkyRail line built for an overseas market. The vehicle adopts a streamlined design, which reduces wind resistance while enhancing the overall aesthetics. Meanwhile, large, barrier-free doors enable passengers of all kinds to easily enter and exit, regardless of whether they are walking, in a wheelchair or pushing a baby stroller. The vehicles feature a walk-through train design to provide excellent accessibility, and the large windows on both sides offer expansive views for an enjoyable transit experience, while the air suspension system ensures that the vehicle runs quietly and smoothly.

The Bahia SkyRail Line has 25 stations covering a total length of 23.3km. It will be connected with Bahia’s existing subway to form a comprehensive public transportation network.

Due to various factors such as local topography, community structure, demolition costs, and passenger volume, the Bahia SkyRail was customized to adhere to several extremely stringent technical standards, all of which it met.

SkyRail is a straddle-type monorail system developed by a dedicated 1,000-strong R&D team following five years of research and development worth 5 billion RMB, which aims to solve traffic congestion in cities. With a minimum turning radius of only 45 meters and able to climb gradients of 10%, SkyRail is well adapted to Salvador’s difficult terrain. What’s more, advanced autonomous driving technology together with a striking and futuristic appearance allows the SkyRail to seamlessly fit into modern urban environments.

SkyRail’s unique technologies have overcome many of the difficulties of construction and operation in Bahia. For example, the elevated tracks don’t occupy valuable road surface, meaning the space below them still can be rebuilt into pedestrianized areas, and their elevated position keeps them free from flooding, which has been a problem for the city’s existing rail network. Thanks to the integrated line monitoring system and the intelligent operations system, SkyRail can immediately identify risks, solve problems, and reduce manual workloads. Besides offering comfortable, low-carbon and efficient public transport for residents, the expectation is that SkyRail will also help attract new businesses and visitors to the area, aiding the government’s efforts to boost local tourism.

The SkyRail has already created a noticeable buzz among local citizens. As early as February 13, 2019, on the day of signing the contract, a large number of citizens held up a banner at the gate of the government of Bahia, which read “very welcome VLT, thank you, governor”, and yelled, “let’s make it a reality together.” Tyler Li, Country Manager of BYD Brazil, also said that when the SkyRail project team went to the local to inspect the progress of the project after half a year, the public recognized them at a glance and said hello cordially.

On January 3, 2020, the state government approved the full preliminary design of the Bahia SkyRail. Bahia Governor Rui Costa said at the time, “SkyRail technology is very advanced, and China’s rail technology has far surpassed that of other countries. I believe in Chinese technology.”

Representing China’s strategic focus on fostering “new infrastructure”, BYD’s rail transit solutions are being warmly received as it strikes up new partnerships, bringing Chinese technology to the world. In Brazil, BYD has already forged cooperation with two cities, among them São Paulo, for which the formal contract to build the metro network’s Line 17 was signed on April 27, 2020. BYD is also actively engaged in and negotiating other rail transit projects in more than 20 countries and cities spanning the Americas, Asia Pacific, Europe, and Africa, some of which are already under construction.