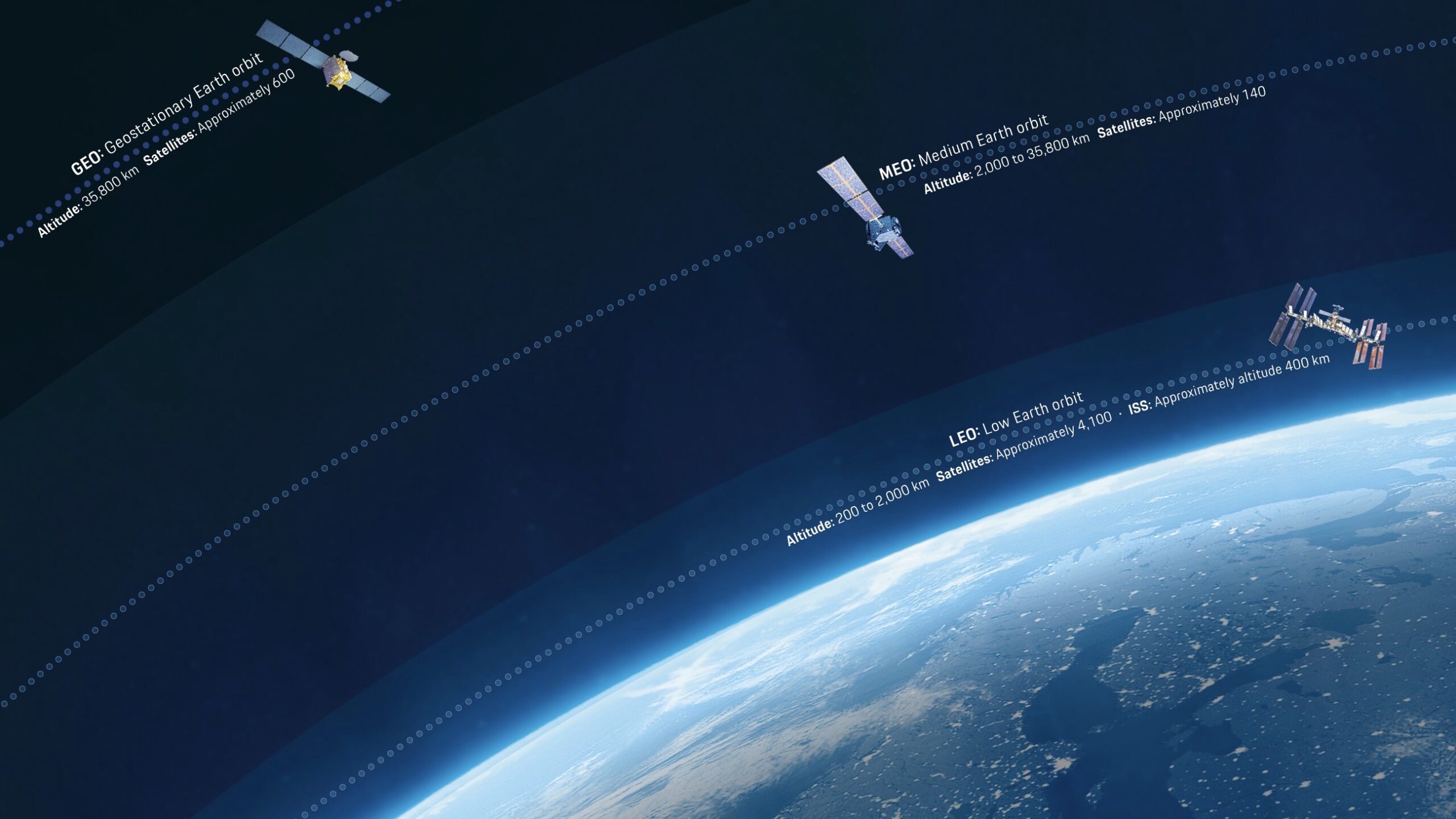 The importance of Satellites and Vehicles of the Future

The importance of Satellites and Vehicles of the Future

The vehicles of the future will be constantly connected, and satellites could play an important role in this. In addition to US providers, a European consortium also intends to build a network in space for this purpose. The first OEMs are already looking into collaborative ventures or satellites of their own.

The automotive industry is currently undergoing a profound transformation. In addition to the transition to electromobility, the function of the vehicle is also experiencing fundamental changes: “The industrial sector is telling us that the trend is moving from a function as means of transportation only to a function that provides a platform for new business models and services,” says Dr. Björn Gütlich, Head of the Satellite Communication Department at the German Space Agency at the German Aerospace Center (DLR) in Bonn. “It’s comparable to the transition from mobile phones to smartphones.”

And as is the case with the smartphone, continuous connectivity will also play a crucial role for the vehicles of the future. New software-based functions such as autonomous driving can benefit enormously from uninterrupted connectivity, for example by allowing them to send or receive warnings about dangerous spots. Approaching vehicles would then still have enough time to adapt to the situation. “A fast, reliable and global connection to the internet would therefore be desirable in the future,” explains Dr. Sébastien Chartier, Business Unit Manager for High-Frequency Electronics at the Fraunhofer Institute for Applied Solid State Physics. “5G and 6G mobile communications will play a crucial role in this regard. In addition, new generations of satellites are also likely to play a decisive role in ensuring global coverage and putting an end to dead spots.”

Satellites are an ideal solution

DLR expert Gütlich agrees: “The existing terrestrial communications infrastructure alone is unlikely to be able to provide nationwide coverage for the foreseeable future.” As he points out, the limited radius of the future 5G cells, with a radio mast at every streetlight, will make it necessary to supplement mobile communications with “celestial radio towers”. “Satellites are the ideal solution,” says Gütlich.

In the future, satellites will not only provide support for autonomous driving. “They could also send up-to-date information about traffic volumes to the navigation system or new software statuses to the vehicle electronics in real time. Finally, data from space could enable interference-free enjoyment of internet-based on-board entertainment services—even in remote areas with poor networks. This means there’s a wide range of uses for satellites in the automotive sector,” says Lutz Meschke, Deputy Chairman and Member of the Executive Board – Finance and IT at Porsche AG and Member of the Executive Board for Investment Management at Porsche Automobil Holding SE.

The prerequisite for the new services, however, is additional technology in the car, in particular for reception of the data from space. Dish-shaped antennas of the kind used for stationary applications are out of the question for the car roof because of their size and shape. Instead, phased array antennas provide an option: They consist of many small antennas and special electronics that can consistently adjust the transmit and receive direction to the position of the satellites, thereby ensuring uninterrupted data reception. Phased array antennas are also completely flat and can be integrated into a sunroof.

The satellite fleets for the new services will orbit the Earth in low Earth orbit (LEO) and geostationary Earth orbit (GEO). Closer to home, the LEO satellites are up to 2,000 km from the Earth’s surface, while their GEO counterparts are stationed at an altitude of around 35,800 km and always remain above the same spot. Both orbits have their specific advantages and disadvantages, particularly with regard to the propagation time of the signals between transmitter and receiver (latency). “The low LEO orbit is suitable for very fast communication because of its low latencies of about 0.04 seconds, while the GEO orbit with approximately 0.5 seconds of latency is ideal for distributing the same content to many users,” explains Walter Ballheimer, CEO of satellite manufacturer Reflex Aerospace.

LEO is already bustling with activity today: Of the nearly 4,900 active satellites orbiting the Earth, about 4,100 are in low Earth orbit. By comparison: There are currently only about 600 satellites in GEO orbit. And the number of LEO satellites is growing rapidly: In 2021 alone, roughly 1,660 of them were launched into space, compared with only about 30 satellites placed in other orbits. The keen interest in space is related to changing framework conditions: While access to space used to be reserved for states and their space agencies, today more and more companies are discovering the transport and operation of satellite fleets as a business model of the future.

This boom has been made possible by advances in technology and the increasing privatization of the space industry: Satellites are becoming smaller and cheaper, and the cost of flying them into orbit is also falling due to cheaper rockets and greater competition among providers. By far the largest and best-known of these is Elon Musk’s US-based space company SpaceX. By the end of 2021, it had put nearly 1,800 LEO satellites into space for its Starlink network. They were launched to bring the internet to remote areas. SpaceX also intends to provide trucks, boats and aircraft with data.

So far, there is no European alternative to Starlink. To change this situation, Munich-based rocket manufacturer Isar Aerospace, together with Reflex Aerospace and laser communications specialist Mynaric, founded the UN:IO consortium at the end of 2021. It will receive 1.4 million euros from the EU to design a study for a dedicated European satellite constellation by 2025. In addition to applications such as broadband connectivity, border surveillance and civil defence, the UN:IO project also regards connected and autonomous vehicles as potential users of its services.

“Services such as video telephony, streaming or even autonomous driving applications will only be possible once there are enough satellites in orbit,” Ballheimer says. Compared to Starlink, however, UN:IO is planning to launch far fewer artificial satellites into space. “We plan to have a few hundred satellites in LEO for fast communications, and a few dozen in a higher orbit for distributing content such as software updates,” Ballheimer says. “Instead of clogging the low Earth orbit with tens of thousands of satellites, we’ll achieve an even higher communications performance by intelligently combining different orbits with just a few hundred satellites.”

Several European automakers are showing a keen interest in cooperating with satellite operators such as Starlink or UN:IO. This would allow them to profit from the existing infrastructure and expertise of space companies. Chinese automaker Geely, in contrast, will be utilizing a satellite fleet of its own. It will not only deliver data to the vehicles, but also provide high-precision navigation data for the company’s autonomously driving cars. It is still unclear whether other OEMs will follow this model. As operators of a satellite fleet of their own, this would make them independent of existing companies, allow them to optimize the technology for their needs, and determine their launch slots to suit their needs.

Porsche SE is also investing in the space business: It has held a stake in Isar Aerospace since July 2021. The company develops its rockets near Munich and stands apart from competitors due to its high level of vertical integration in particular: All major components are developed by Isar Aerospace itself. Isar Aerospace is planning to launch the first test flight of its twostage ‘Spectrum’ launch vehicle from the Norwegian island of Andøya at the end of 2022. Later on, it plans to launch small satellites into space for customers such as the UN:IO consortium, among others—and thereby contribute to making traffic on earth a little safer and travel more pleasant.

0 0 0
Previous : Atwell finances acquisition of Cross Surveying in Florida
Next : Scientists use electricity to find Materials that can Learn