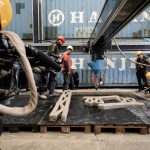 Following the announcement a couple of weeks ago that Danish COBOD International had received an order for the largest 3D construction printer in the world from Saudi Arabia, COBOD continues to make news with their 3D Construction printing activity. COBOD has now announced that it is responsible for the delivery of the giant 10 x 10 x 10 metre State of the Art construction printer, which was shown to the public at the recently held press event at Belgian Kamp C.

Commenting on Kamp C’s choice and the desire to become involved in 3D construction printing, Kathleen Helsen, President of Kamp C explained: “Kamp C wants to keep up with the latest developments and even play a pioneering role in terms of innovation in construction. We have succeeded in this ambition with this printer. This innovation offers countless new options for the entire construction industry.”

COBOD has been responsible for the development and supply of the printer, but as part of the supply agreement also educated and trained the employees of Kamp C to such an extent that Kamp C now can educate and train others wanting to use the printer. Project Manager from Kamp C, Kai Van Bulck said: “COBOD International has supplied the printer and the necessary training, but today we are fully capable of operating the printer without the involvement of COBOD. Companies will be able to come here and experiment with the printer until 2020, giving them plenty of time to discover all the advantages of this technique.”

Kai Van Bulck represents Kamp C in the C3PO-project (Co-creation, 3D printing with organizations), which was established to introduce the Flemish construction industry to this new technology. Involved organizations include the construction companies Groep Van Roey, ETIB and Beneens, TRiAS architecten and Ghent and Thomas More universities. The ambitions in the C3PO-project are very high, not only involving 3D printing the first building in Belgium, but also to print it on site and in two storeys, which nobody else has done before.

Kai Van Bulck, project Manager explained: “Here in the beginning we will mainly do various tests and experiments, but later we intent to start 3D printing a 2-storey building of our own.”

Jakob Jørgensen, Technical Manager of COBOD, who was responsible for the installation and training at Kamp C, added: “3D construction printing is still very new and so far only companies, which have made printers have operated them. Kamp C will be the first organization to construct a building on site with a large 3D construction printer not developed by themselves. We are very pleased with the supply to Kamp C and it is great to see that Kamp C now has the experience and competence to set ambitious goals for their use of the printer.”

0 0 0
Previous : Parking just got very smart and is closing in on illegal vehicles
Next : Berry Systems showcases turnkey parking solutions at Traffex