Chalmit, the leading luminaires manufacturer, has launched the Protecta X LED, a revolutionary light for the engineering and manufacturing industries. Up to 50% brighter than any traditional linear light on the market, the Protecta X has a user-definable light distribution, a maintenance-free lifespan of over 120,000 hours at 25°C, is easier to maintain, and thanks to an optional battery stick, can be installed in half the time.

Chalmit, part of the Hubbell Harsh & Hazardous group, is a leading supplier of lighting to many industries. The Protecta X is Chalmit’s largest ever investment in product development; with four patents pending it is expected to lead to a whole new generation of LED lighting within the engineering and manufacturing sector. 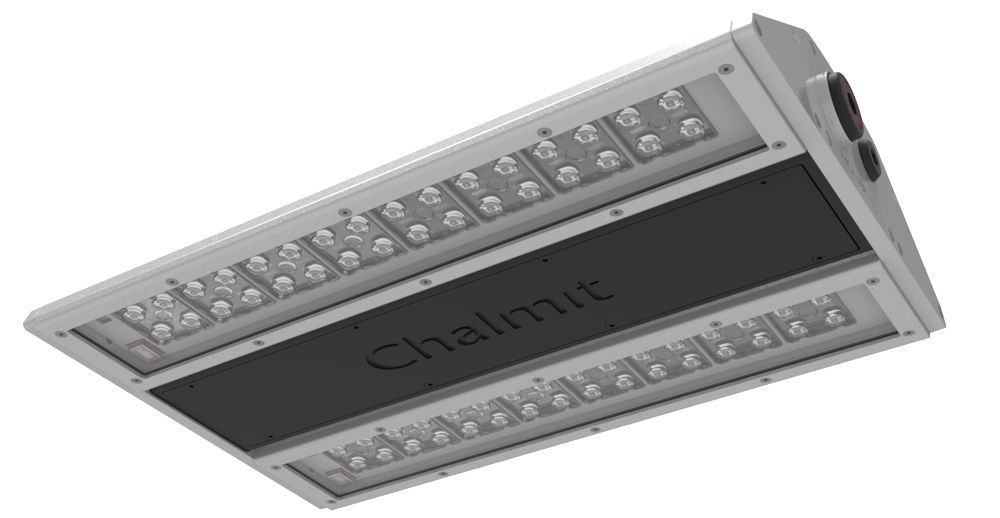 Ken Eddleston, Chalmit’s Lighting Product Manager elaborates: “Traditional linear luminaires have dominated the low-level lighting of areas for over 50 years. But linear lights were originally designed to house fluorescent lamps, since then LEDs have come in, but the linear enclosure hasn’t really changed, leaving the performance of LEDs compromised.

“We felt it was time to change all this. So, we gave the luminaires a complete re-think, putting customer needs, product lifespan and lumen output front and centre of our design process. Rather than accepting the constraints of a traditional linear enclosure, our design team started from scratch and asked what design would ensure the absolute best from the LED? The result is the Protecta X – the highest performing LED linear ever developed.”

The Protecta X has specialised optics which deliver the output of a 4ft linear in a lightweight and slimline luminaire package. The optics control the light, generating a highly targeted, bright, white output over the desired area, and limiting the amount of wasted spill light. The optics are available in a variety of distinct distributions, designed for key site applications – such as mounted from handrails for walkway illumination and localised lighting in low/ medium bay applications.

Chalmit has also innovated with the emergency version of the product. The Emergency Protecta X has a revolutionary battery stick which slots into the side of the luminaire, eliminating the need to laboriously open the driver enclosure to access the battery. If battery issues arise, the stick can be simply removed or replaced in minutes – reducing maintenance times by a third.

The position of the battery stick also means users can purchase the stick when they’re ready to use the luminaire. Ken Eddleston explains why this is such an important feature: “A luminaire is often delivered to site well in advance of project completion. However, the longer you leave a battery unpowered, the more likely it is to fall into an unrecoverable deep discharge state – resulting in expensive and time-consuming maintenance of the unit before it has even been used! We’ve eliminated this big problem; if they want to, users can simply purchase the battery stick when they’re ready to use the luminaire.”

The Protecta X also avoids the overheating issues of traditional linear luminaires, making it more likely to meet the stipulated 120,000-hour lifespan; even at 60°C, it has a lifespan of 90,000 hours. Its LEDs and driver are housed in separate enclosures extending the life of both components. Air gaps between the luminaire and central body prevent the collection of dust and particulates, which can also encourage overheating.

Made of highly recyclable marine grade aluminium, rather than plastic, heat is conducted away from the new luminaire’s central body. These design features ensure the Protecta X has an exceptional ambient temperature range of -40oC to +60oC in standard models and -25oC to +60oC in emergency variants.

Ken Eddleston concludes: “Many hundreds of hours of development time, fifteen customer study groups and thousands of pieces of customer feedback have gone into the Protecta X. The result is a luminaire which delivers on every front. This is truly a step-change moment in the development of low-level lighting for the engineering and manufacturing industries.”