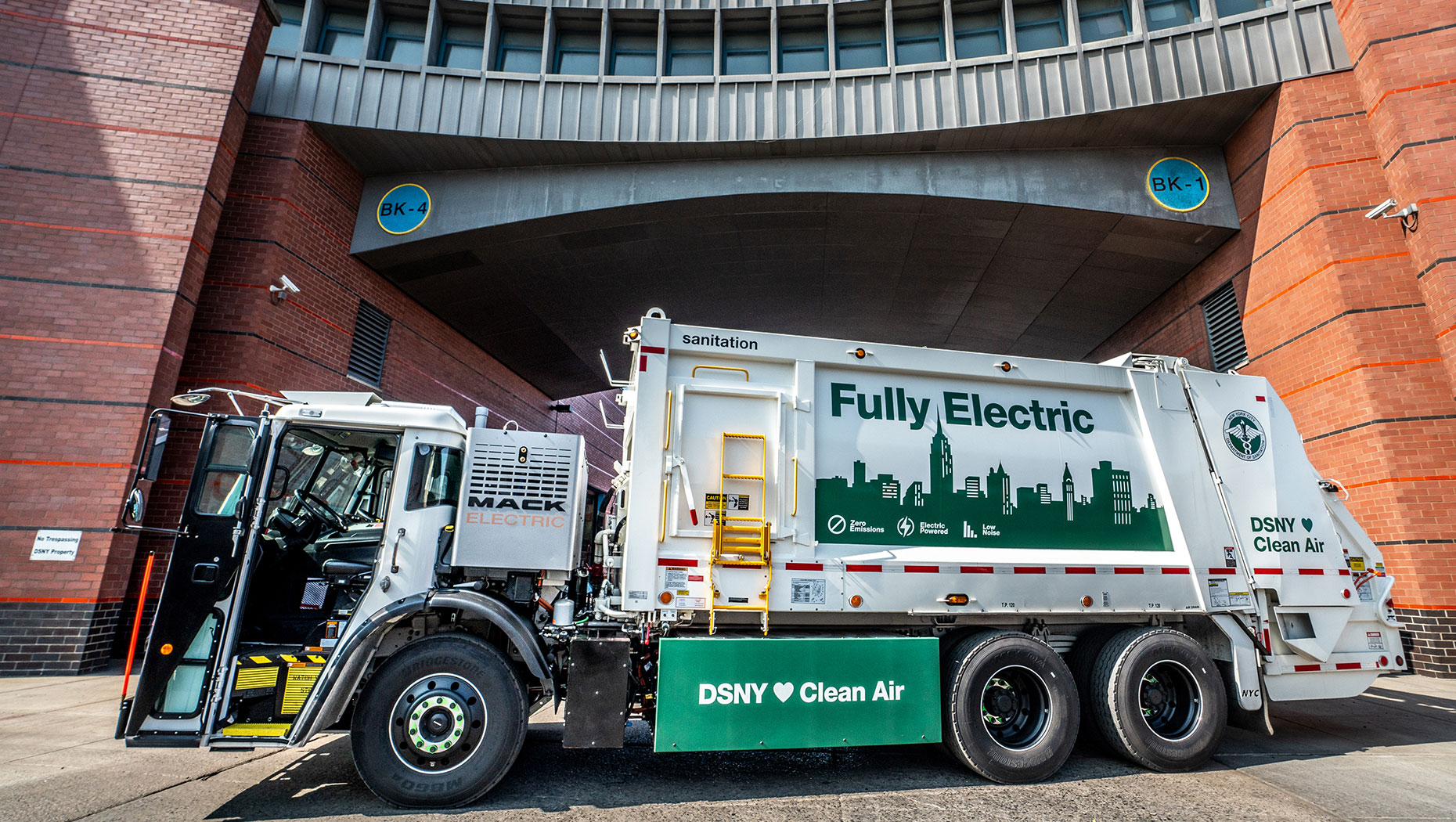 Volvo Group’s subsidiary Mack Trucks announced today that the New York City Department of Sanitation (DSNY) plans to purchase seven Mack® LR Electric refuse models, which will operate in each of the city’s boroughs. Mack made the announcement during WasteExpo 2021, June 28-30 at the Las Vegas Convention Center.

“The DSNY order for an additional seven Mack LR Electric trucks speaks to the fact that the performance of the current LR Electric demonstrator model collecting in Brooklyn is meeting and even exceeding their expectations,” said Jonathan Randall, Mack Trucks senior vice president of sales and commercial operations. “Mack has long been the number one choice of refuse customers, and we are now well-positioned to be the industry leader in e-mobility as well. The Mack LR Electric is equipped with Mack’s integrated electric powertrain and will help New York City and DSNY achieve its zero-emissions goals.”

The world’s largest municipal sanitation department, DSNY collects about 12,000 tons of refuse and recyclables daily with more than 6,000 vehicles, the majority of which are Mack trucks.

“We look forward to our continued partnership with Mack Trucks in striving toward our environmental efforts to benefit the citizens of New York City,” said DSNY Commissioner Edward Grayson. “The Mack LR Electric demonstrator is performing well, and we look forward to when we have one in each of our city’s zones.”

The seven battery-electric vehicles (BEV) will be located in the seven zones within New York City – the Bronx, Brooklyn North, Brooklyn South, Manhattan, Queens East, Queens West and Staten Island. DSNY will use a DC fast charger to charge each of the LR Electric vehicles.

“New York City has set an ambitious goal of reducing GHG emissions by 100 percent by 2040,” said Rocco DiRico, deputy commissioner for support services at the New York City Department of Sanitation. “DSNY is purchasing these seven Mack LR Electric refuse vehicles in support of achieving our environmental objectives with a zero-emissions truck that is also extremely quiet.”

Mack first introduced a prototype of the Mack LR Electric at WasteExpo 2018, announcing its plans to partner with DSNY for real-world testing in the largest sanitation department in the world. Serial production of the Mack LR Electric will begin in 2021. The vehicles will be built at Mack’s Lehigh Valley Operations (LVO) facility in Macungie, Pennsylvania, where all Class 8 models for North America and export are assembled.

Four NMC (Nickle Manganese Cobalt Oxide) lithium-ion batteries, charged through a 150kW, SAE J1772-compliant charging system, offer vehicle propulsion and power for all onboard accessories, driven through 12V, 24V and 600V circuits. The three-mode regenerative braking system accounts for the refuse truck’s increasing load throughout the day and helps recapture energy from the hundreds of stops the vehicle makes each day.

Featuring a copper-coloured Bulldog hood ornament to signify the fully electric drivetrain, the Mack LR Electric may be fitted with equipment bodies from a number of manufacturers, allowing the truck to be tailored to each customer’s unique needs. Customers will be able to choose from the same driver/passenger side driving configurations, seating choices and door options offered on the diesel-powered LR model.