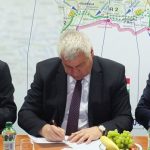 The consortium led by Eurovia and including Doprastav and Metrostav Slovakia has been awarded the contract to build a new 8km section of the D1 Motorway near Prešov, in Eastern Slovakia. When it is completed, this motorway will connect Austria to the West and Ukraine to the East.

This €356 million contract covers construction of a 2.2 km tunnel, 18 bridges and over 6 km of noise barriers. Eurovia will be leading the construction work, which will begin in the summer of 2017 and is scheduled to be completed in 2021. As many as 500 people will work on the project at its peak.

The environmental protection measures include sprinkling systems for dust control, road cleaning systems and planting of 58,000 bushes and 500 tress.

Eurovia built the PR1BINA expressway, which was inaugurated in 2011, west of Bratislava, has also built several sections of the D1 and D3 since 2012, and remains actively involved in efforts to upgrade Slovakia’s motorway network.

Slovakia has an investment plan in place up to 2020, backed by the European Union’s Cohesion Fund, to complete construction of its national motorway network.

Investments will provide faster and safer road connections across Central Europe, foster tourism and streamline access to the larger industrial and administrative centres.